A DIY Split Level Entry Makeover: Before & After 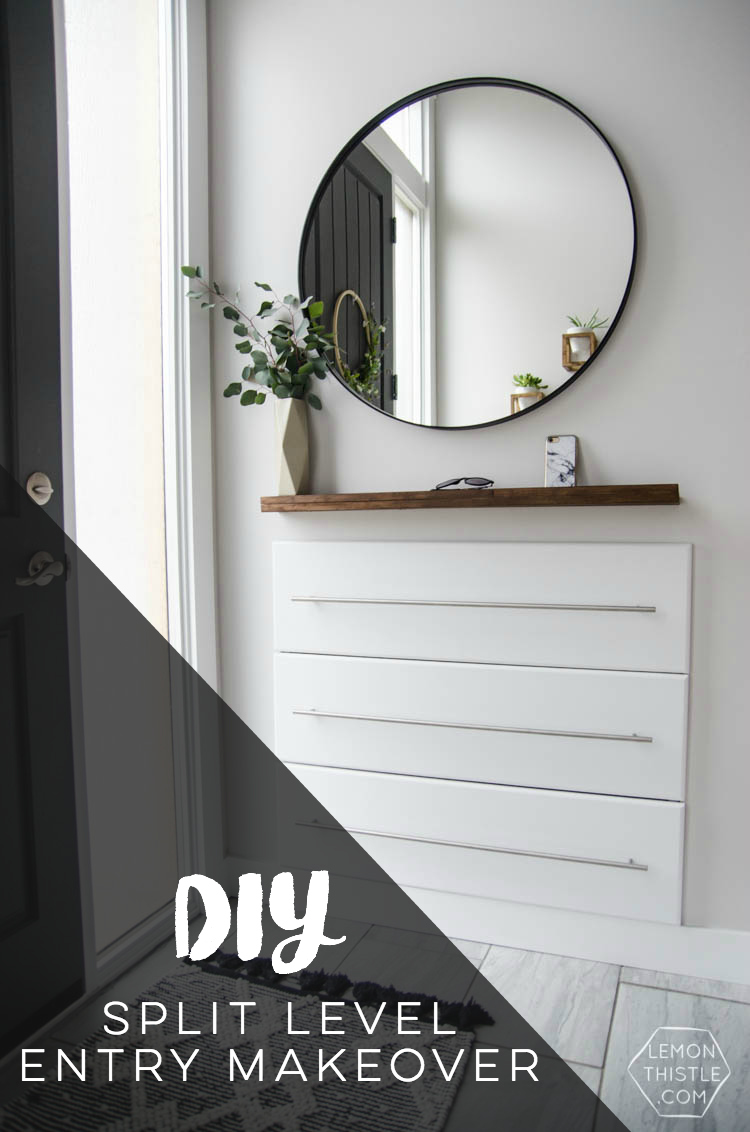 I am so excited to share our entry way makeover with you guys today! I officially finished it yesterday and couldn’t wait to share it… so that’s what I spent my morning doing. I can’t believe how big of a difference such a small space makes now that it’s all DONE and functional and beautiful. Living in a cathedral entry (split level entry), we see this entry from our kitchen and our living room. It’s RIGHT in the middle of things and it was pretty neglected before. Like everything, we worked on it in stages until recently when we decided it was our priority to finish off. 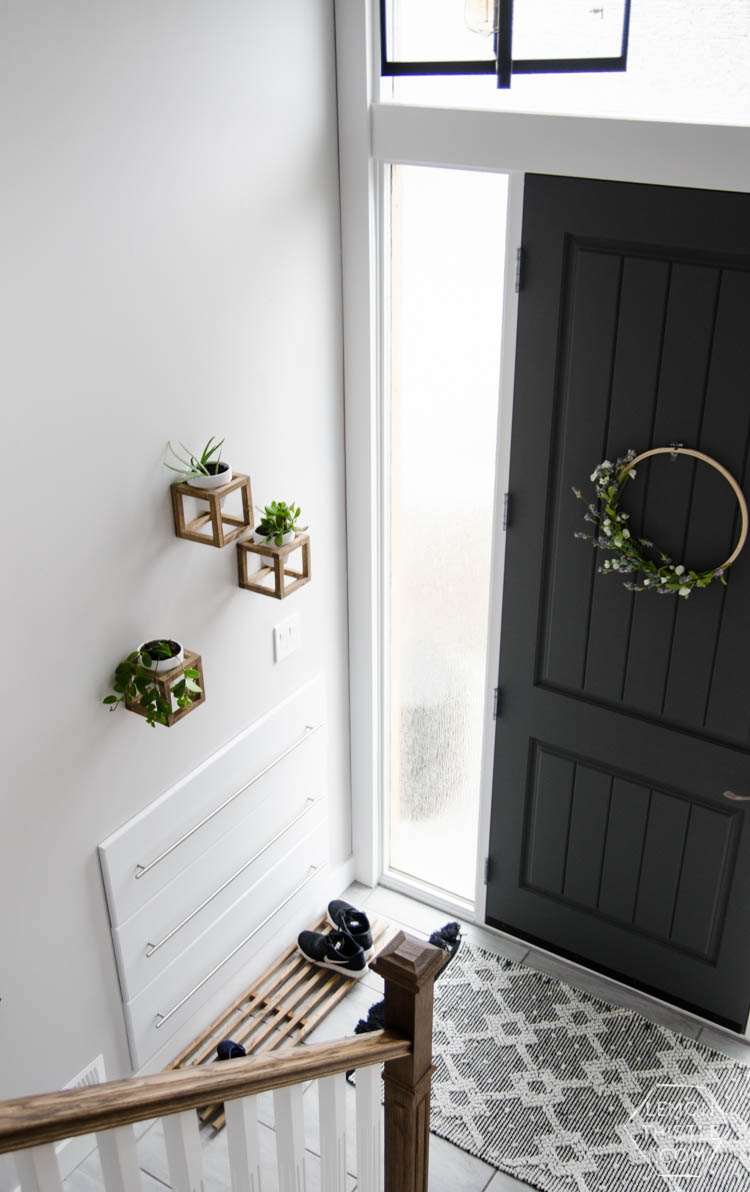 Shall we take a peek at the before? You can see we’ve done EVERYTHING from new tile, wooden stairs, hand rails, shoe storage drawers, new door and window, light… the whole thing, you guys! 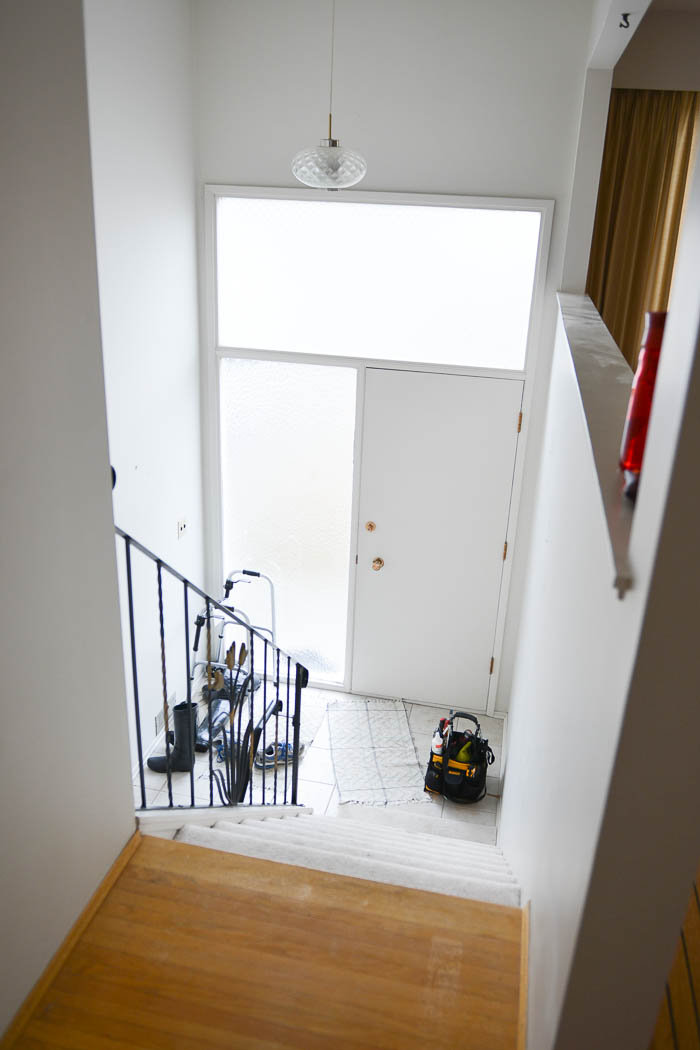 Isn’t that before SO different? I can hardly remember that. If you are curious, you can totally check out our whole home before photos right here. So obviously, I have a lot to talk on here. Let’s start with what we changed BEFORE moving in. And that is the floors. 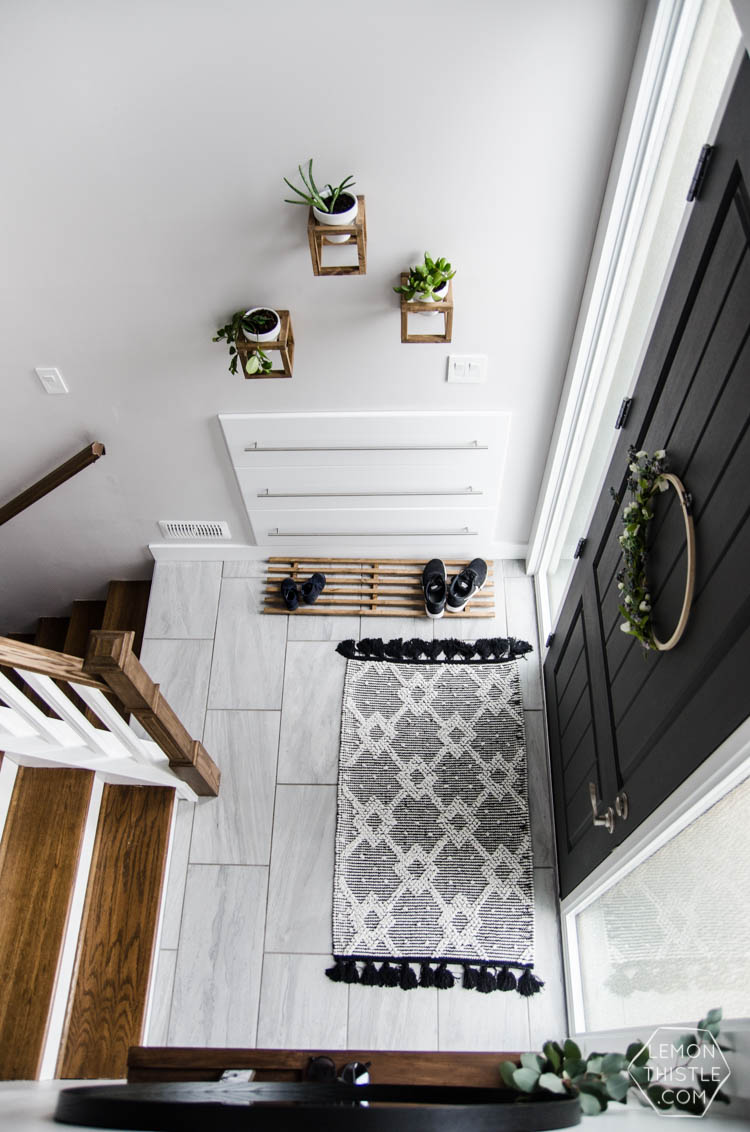 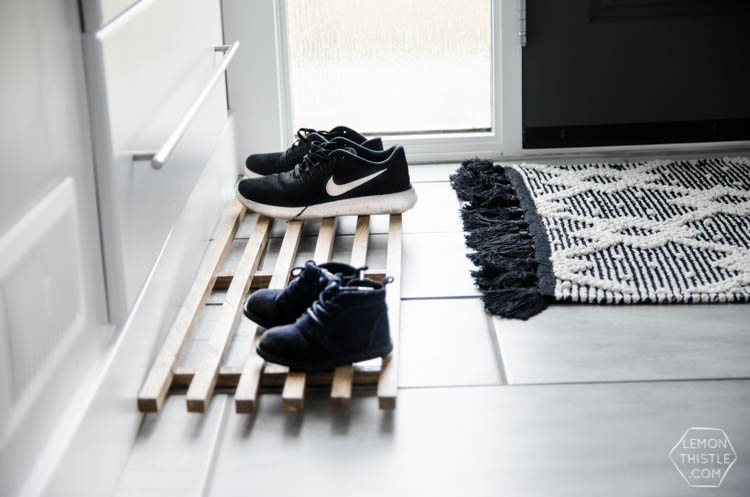 If you’ve ever refinished floors, you know it’s a put you out of house type situation. Especially when the wood floors are everywhere. We sanded those babies down and refinished them you can read all about that right here. We also tore off the carpet on the stairs to put wooden stair caps on. BUT they were a strange rise and the caps wouldn’t work (we tried a few kinds) SO we tore out the stringers too and rebuilt the stairs. That sounds like a ton of work, but we had some great help and it was done in a weekend. The hardest part was that these old walls were pretty warped and we had to cut each stair cap (tread) at different angles. We chose to stain the oak treads to match our hardwood floors and to use a high quality plywood painted white for the rise. I really love the white/ wood look which influenced the new hand railing when we finally did that this year! Would you guys want a post on the stairs? I know that I took pictures but it’s been like two years since we did them so I’m just not that interested in/excitable about them any more but can do a post if that would be helpful for you!

We also knocked out the old tan tile that was in there and lived with plywood subfloor for a few months. When our bath tub started leaking and we put in a new one (and tiled the surround!) we tiled the entry at the same time. This tile is 12×24″ from Home Depot with Delorian Grey grout. I really love how it looks for such an affordable tile- I would totally do it again! 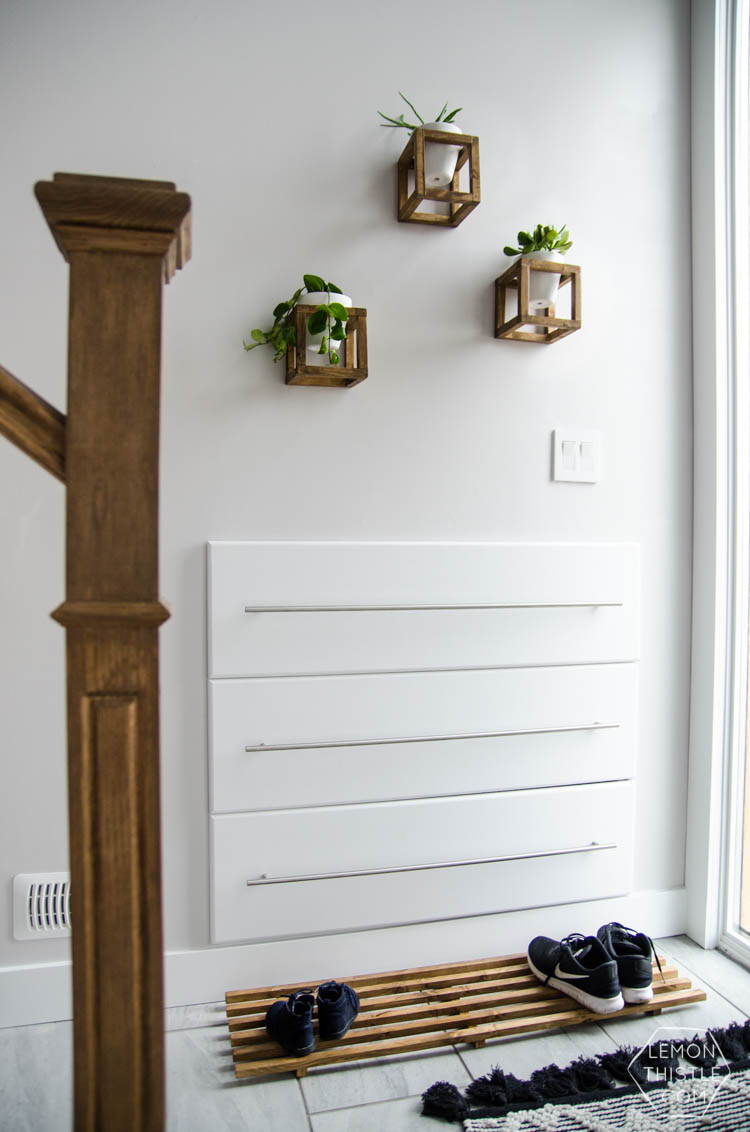 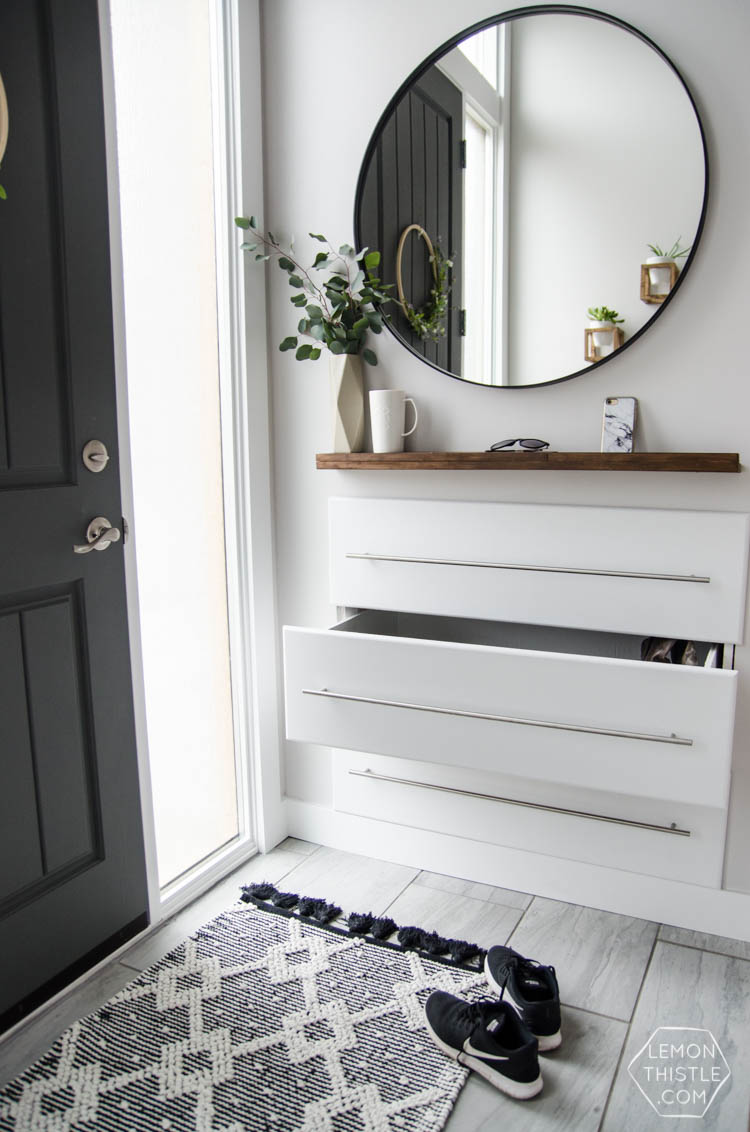 Next, we cut some holes in the drywall for shoe storage.

We did this about a year into living here when we were finishing the basement (you can check out the suite and our side). We had planned to make these into shoe shelves but the clutter would have been killer so this year we made them into built in shoe storage drawers. Having all the shoes contained and out of sight makes SUCH  a difference in how clean this space feels! It NEVER looked clean before, you guys. I talk more about how much I love them and how they are made (so you can make your own!) in the DIY post right here. 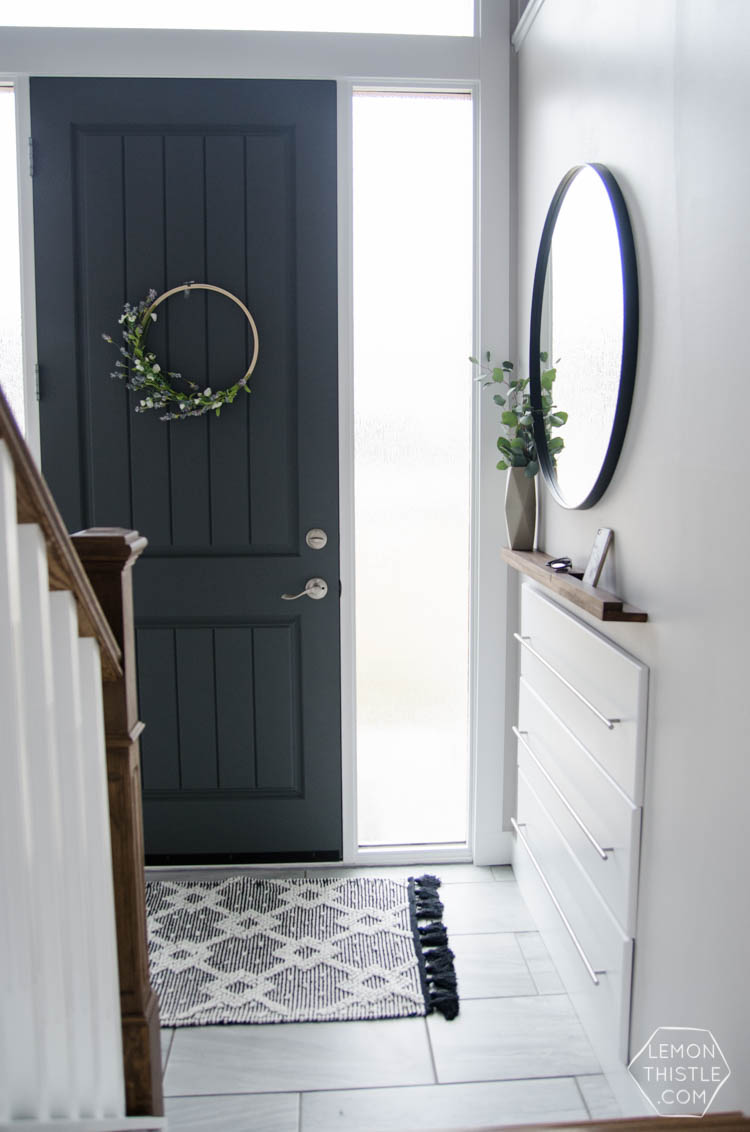 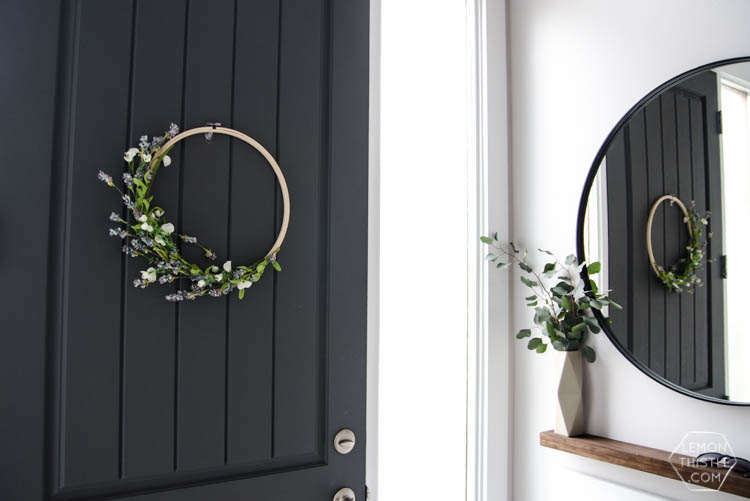 There were really SO many things in this entry that demanded a makeover- not just aesthetically. One of those was our door. It didn’t shut properly and would swing open when it felt like it unless we had the deadbolt turned. It also leaked, you guys. Like if there was a storm, our entry flooded. The worst. That’s not mentioning the chunks/chips and how dated the glass (checkered?) looked. This fall we had saved up and decided it was time for that baby to go. I’m in LOVE with the door that we have now. It’s over sized which I thought might look strange in this age of house but it really pulls the levels together instead of having such a giant window above the door. If you’re in Kamloops, by the way… I’d be happy to recommend a doors company to you (amaaazing service). We chose a fibreglass door that has a wood texture (did you know there was such a thing?) and rain glass sidelights and transom windows. I know that clear glass is the ‘in’ thing and it’s what they put in new houses… but I like my privacy, thank you. We painted it a light charcoal color called ‘Straight Goods’ from Para Paints and trimmed it out with a modern farmhouse trim. Speaking of paint… the wall color is custom BUT we found almost an exact match (by happy accident) from Para Paints called ‘Dreaming in the Clouds’. 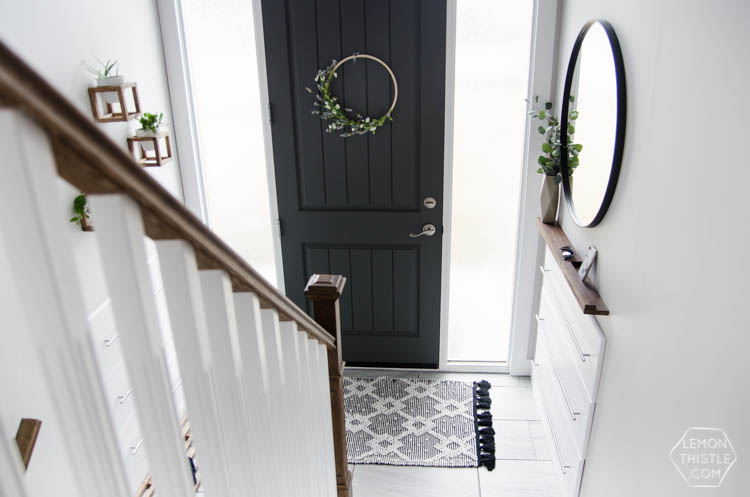 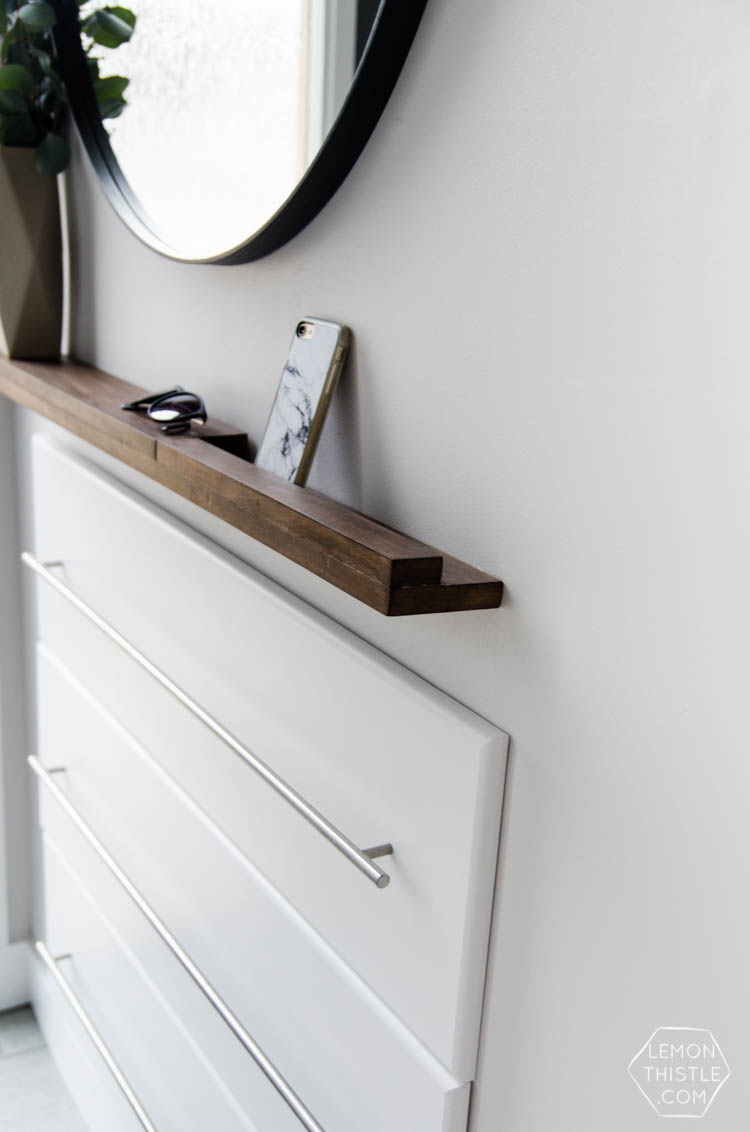 The other major concern in this space was the hand rail. It just wasn’t safe before. The spacing of spindles was so wide that our kids could sit in between them (stress a mama out!). We built this wooden stair rail with materials from Home Depot and wrote a whole post about the process if you’re interested. I really love that we chose to do the white spindles with the wood rail and newel post. It ties together the stairs so well.

We wanted to carry the white/ wood theme down onto the entry way so quite a while ago now I’d made a thin floating shelf for keys and coffees. I made it using L brackets but when we moved it (we switched the way the door opens when we got the new one), we changed how it was installed. I’ve updated the post with instructions to make it truly floating (it’s amazing FYI). 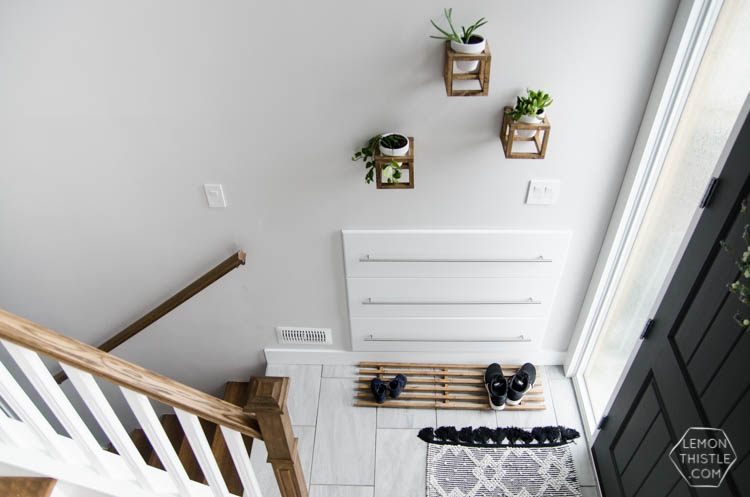 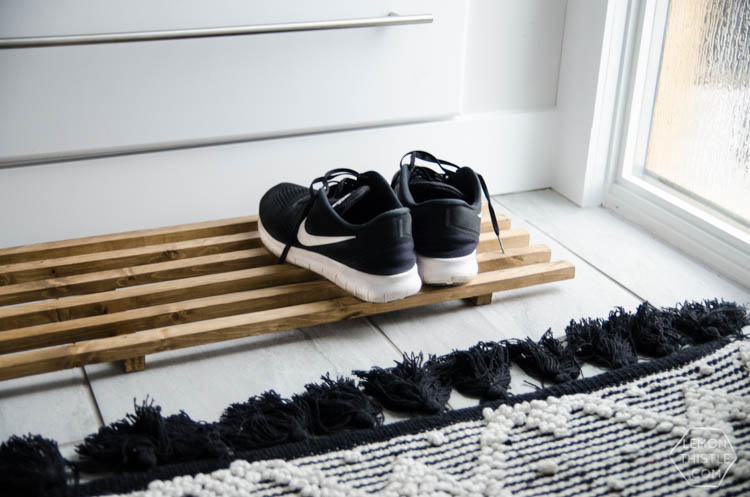 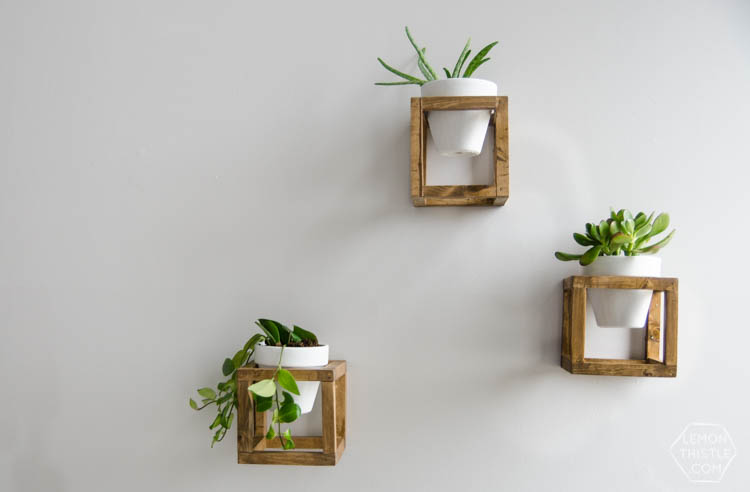 We carried that same wood tone from the stairs and rails to the other side of the entrance with a wooden shoe mat I made (I am DONE with the rubber ones, you guys, I put those inside the shoe drawers and will never trip over one again) and cube wall planters. These two projects were done in a day using two 8 foot 1x4s. That’s about $8 total if you’re wondering #win. I’m not going to post DIY instructions for those- you can check out this post for the planters (it’s in German, but Google Translate is a wonderful thing- I used brad nails though) and this post for the mat BUT I used 3/4″ square pieces of wood cut with a table saw from a 1×4 instead (also I sealed it with Varathane Crystal Clear Satin). Honestly… most of the time for those projects was staining and sealing them. A word of advice- if you want to stain yours and seal them… do it BEFORE you assemble and save yourself some serious time. Oops.

Aren’t these planters amazing though? I really love how they work in the space to bring the wood tones up the wall and add some life but also they add such good shape around the light switches. For all you plant lovers, those are (top) aloe, (left) lipstick, and (right) jade. 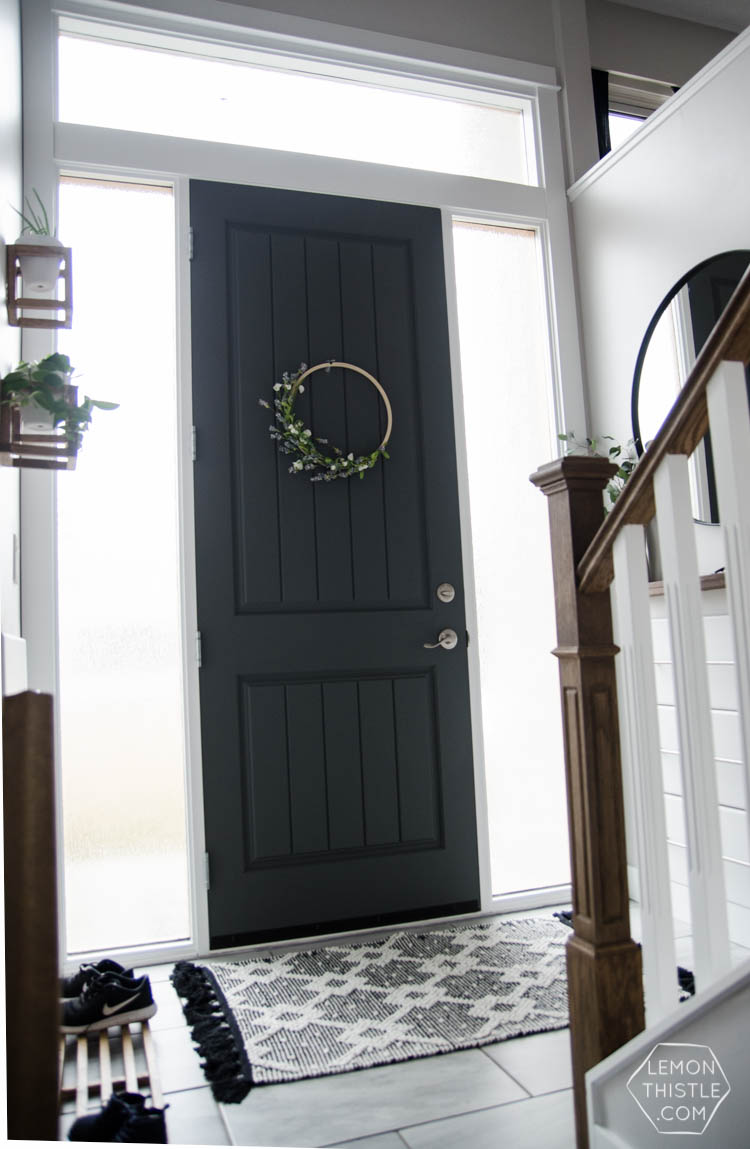 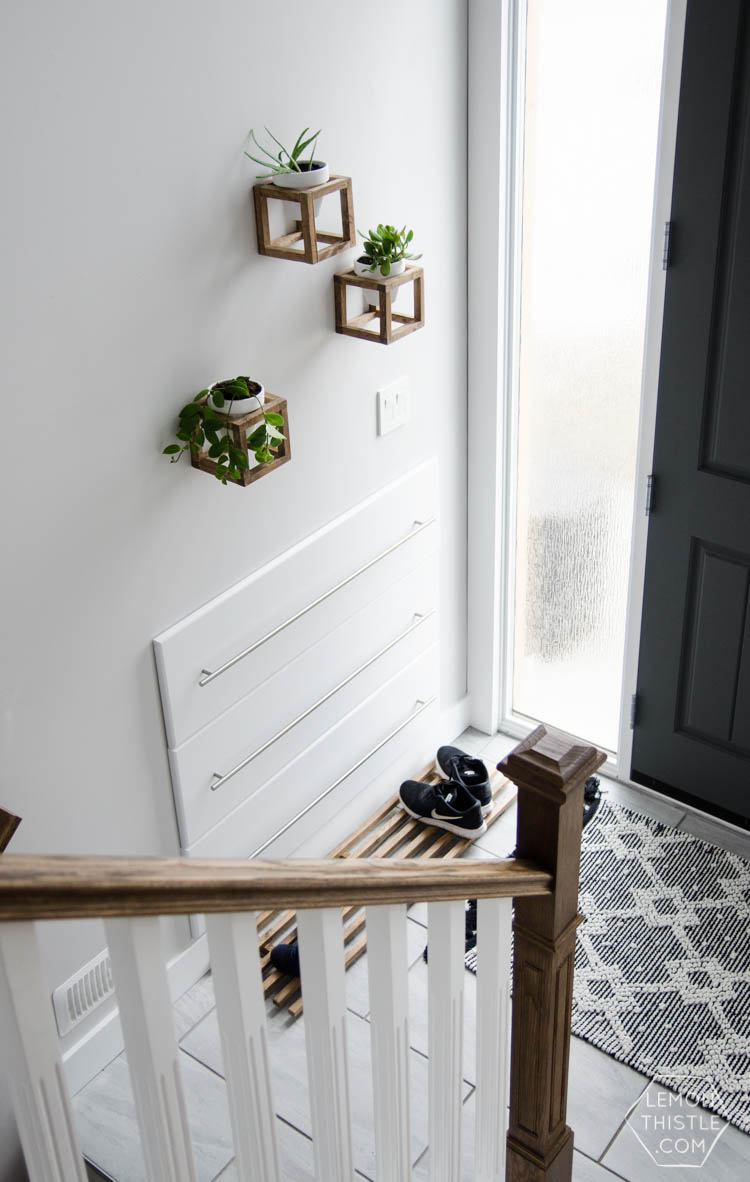 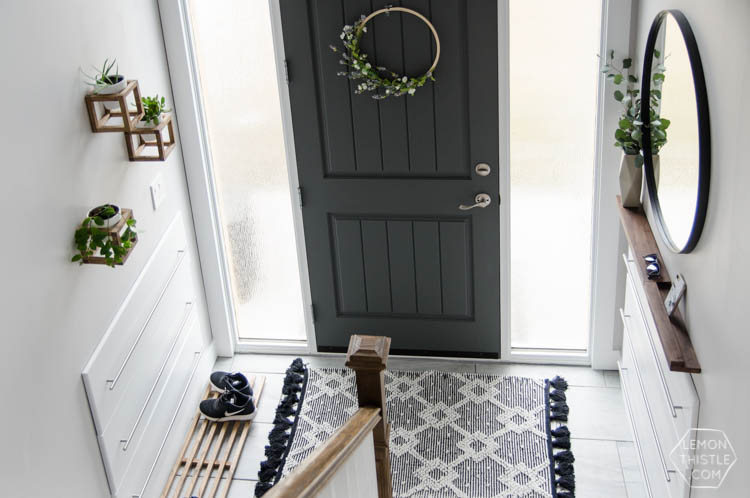 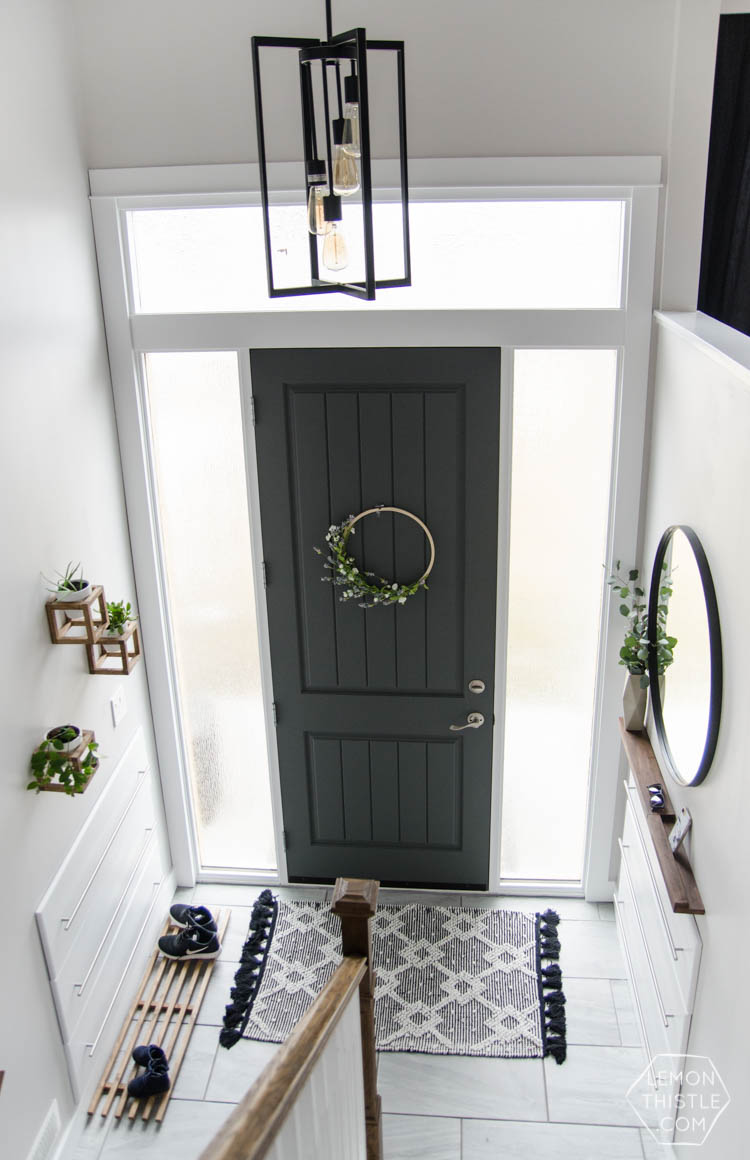 Originally, I’d planned to leave the light that was there when we bought the house and just paint the different pieces (except the glass- there was silver, gold, white, and black in ONE fixture) but as the entry started to come together we knew a bigger light would make such a difference and it really, really does. Also- we went from one lightbulb to four so the space got so much brighter in the evenings. We grabbed this one from Home Depot (can you tell we are there ALL THE TIME?) and I really love how the length of it compliments this HIGH space. We have pendants with Edison bulbs in our kitchen (right at the top of the stairs) so I love that they are featured here too for continuity. BUT the bulbs we picked up from home depot have this champagne kind of coating that make the light really yellow. We ordered some LED ones (tested them first) from the lighting store and will replace them when they come in. Thank goodness for neighbours with really tall ladders ;) 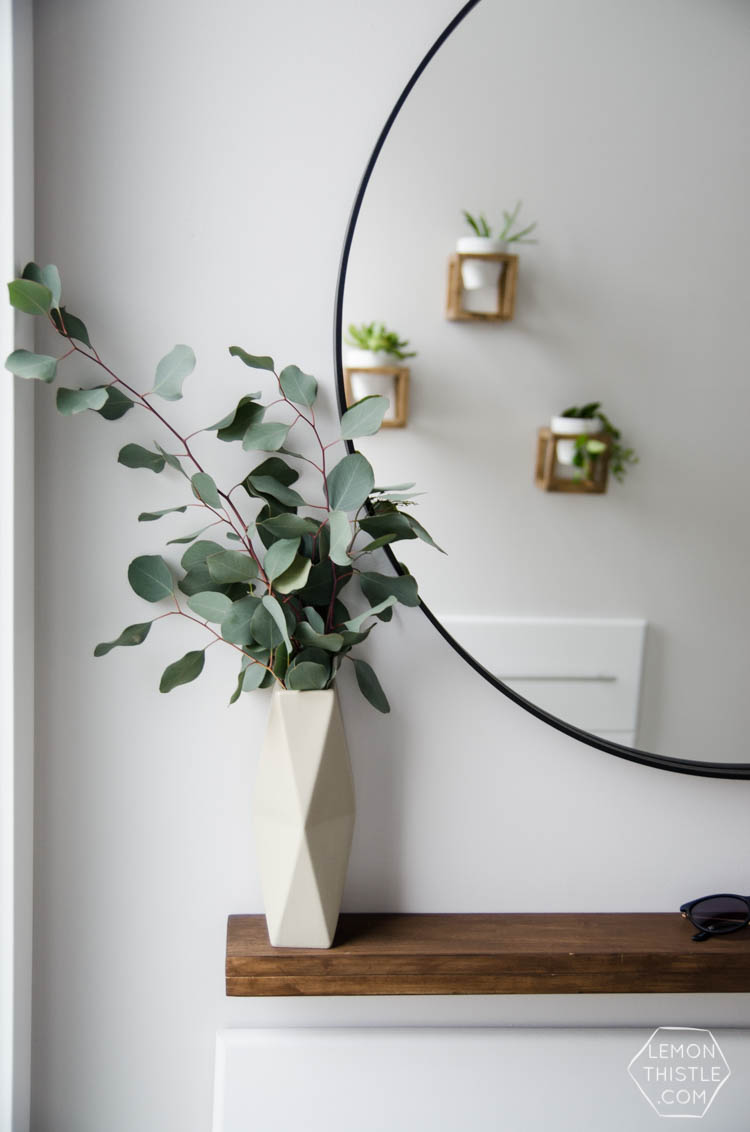 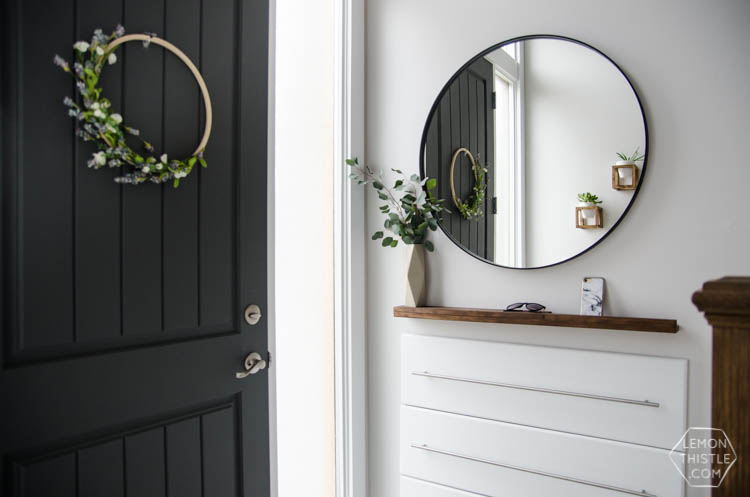 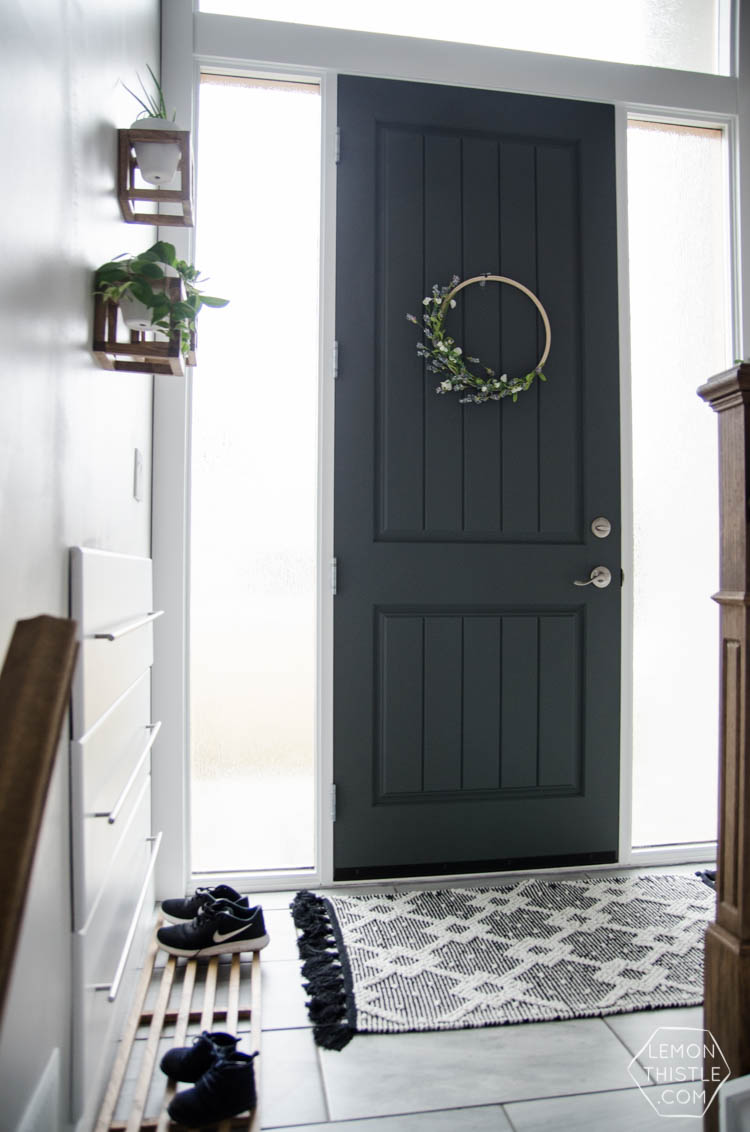 In the past, I would have stopped at getting it functional, but the more I do this blogging thing (and do this living in a house of my own thing), the more I’ve realized how satisfying it is to have a decorated space- not just a done space. Now every time I walk by this landing (which happens 100 times a day, I swear) I feel happy. Some of the details we added at the end are that round mirror, that tasseled rug and the vase of eucalyptus. The round mirror is from Ikea and I’m so happy we decided to buy it. We tend to make everything for our decor just to save on cost but mirrors aren’t exactly makeable- and it’s what this space needed. I love the round shape over that floating shelf. We had planned on buying the smaller one ($30) but made the impulse decision to get the bigger one and I’m so glad we did.

The floor mat is 100% cotton and doesn’t have a backing. I know that’s stressful for some of you BUT here’s what’s rad about that… you can toss it in the wash. The mat we had in there before was alright (not great) but since it had the rubber backing, we couldn’t toss it in the wash. So all winter it got more and more dirty and looked pretty gross but we couldn’t take it outside and hose it down while it’s this cold. My sister in law told me about a little secret to keep a less structured mat like this in place in a high traffic area- 3m velcro strips! Just stick one to your rug and one to your floor in all the corners and middle and you’re SET. I need to do this to the rug in our kitchen too because that one is constantly getting kicked around. I found this one at Homesense and was able to use a gift card so I paid $7 for it which felt like a steal. The vase is from Target.

Alright- that was a LOT of details! If you’ve stuck with me this long… thank you! Shane and I are so amazed at how big of a difference such a small space makes in the feel of our home. It’s the first place we walk into and it used to just cause us stress. Now, it’s one of my favourite spaces in our home. Maybe because it’s the only one clean right now, but nonetheless ;)