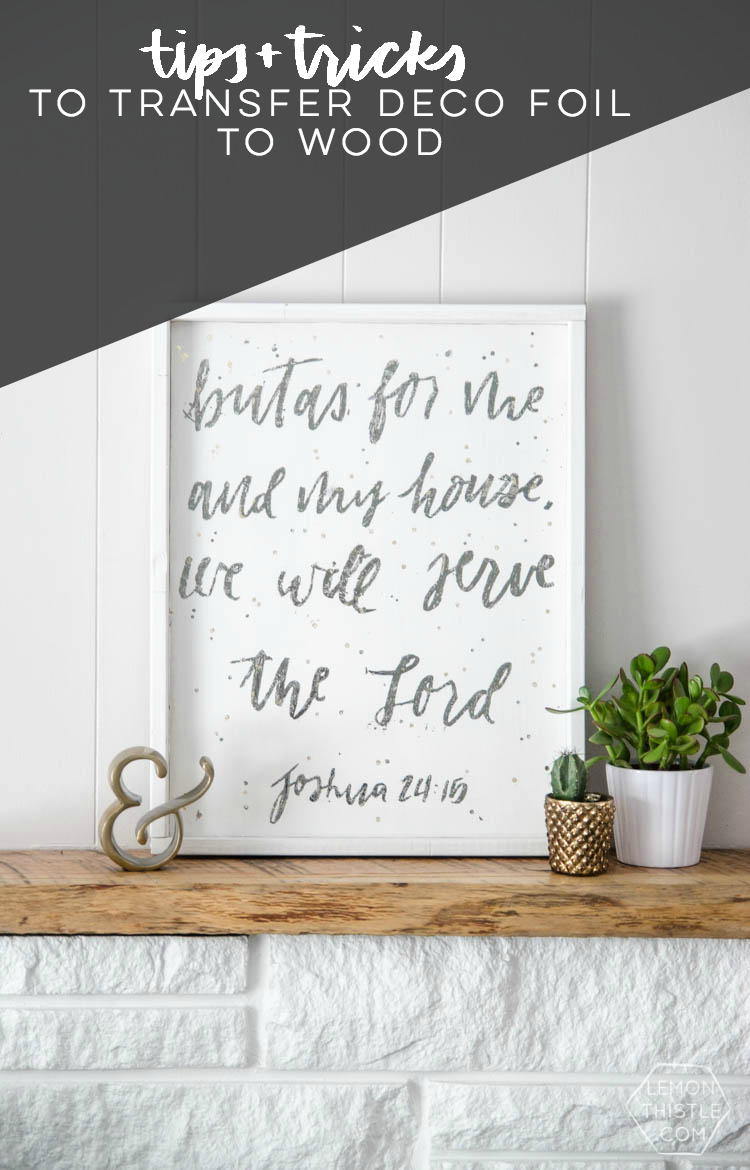 Today I’m so excited to share some tips with you all on how to transfer Deco Foil to wood a couple different ways- and then give you a chance to win some to test out yourself. But first I wanted to tell you WHY I decided to use this verse for the sign. When Shane and I were engaged, I gave him a tattoo GC and he got this verse tattooed on his arm. Then, when Shane and I got married and I started doing crafty things- he made one request. Just one. That I make a sign that says this. I said yes, of course. But we’ve been married almost 8 years you guys… and I never did. But you know I’ve made probably 15 signs and countless lettering pieces. But not this. So now I’ve finally made good on the promise… and it took way too long!

But now that we’ve got my #craftywifefail moment out of the way- lets’ talk about alllll the things I learned about transferring Deco Foil to wood and tips so that you can get it right the first time. It’s kind of hard to tell in these photos but the stuff is foil level shiny. I took a close up of it reflecting so you can see what I mean. 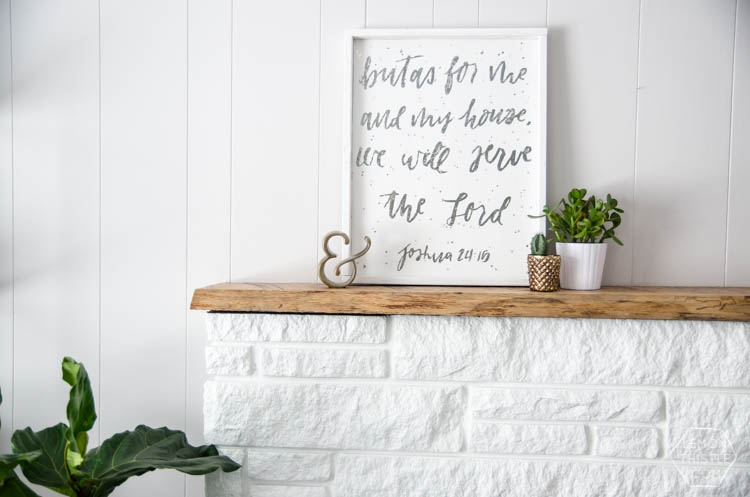 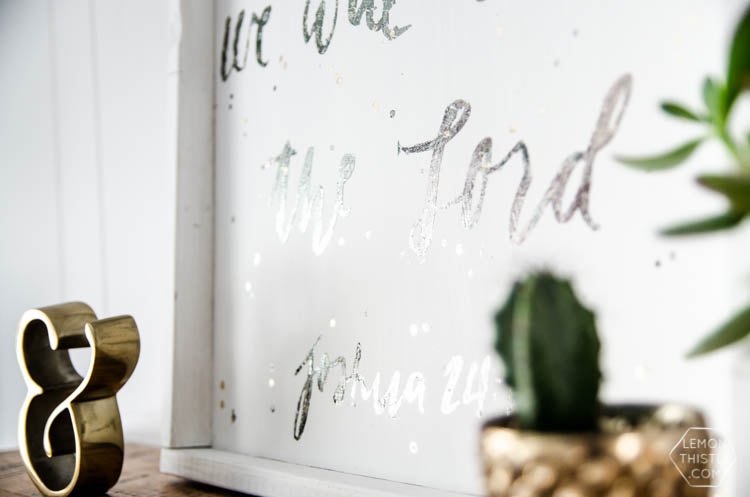 If you haven’t worked with Deco Foil before, it’s super fun to play with. I’m on the Therm-O-Web ambassador team this ear and I’ve not so silently made Deco Foils my favourite product of choice (although I do love the no sew products too #nosewforlife). I’ve made a few DIYs with it here in the past- like this metallic throw pillow, this holiday hoop decor, and this customized photo frame mat. It’s an easy way to get the foiled look without fancy heat tools (like the Minc… although I still covet one of those). Plus they come in SO many cool colors. The idea is that you lay down the adhesive and when it’s not liquid any more but still tacky, you lay the foil down and peel back the plastic to transfer where there’s tack. Pretty simple, right? 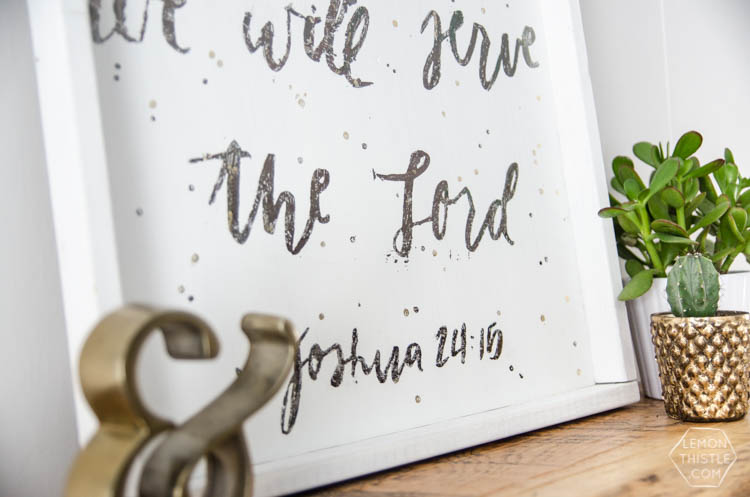 But there’s a few different adhesives and ways to transfer. My goal with this sign was to use a stencil I made with my Cricut (my lettering, if you like it, you can grab it to make your own stencil RIGHT HERE), and to end up with a rustic/crackled/ brush stroke looking sign. You know, kind of how gold leaf looks when it is applied but without all the mess. I chose to use a Pewter foil– I love the smoky but not black tone of this one, and a gold accent. The gold accent is my favourite part. 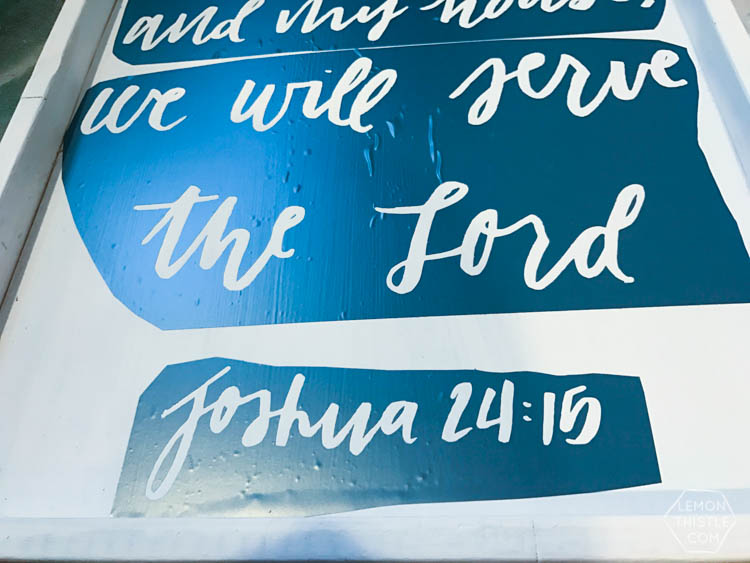 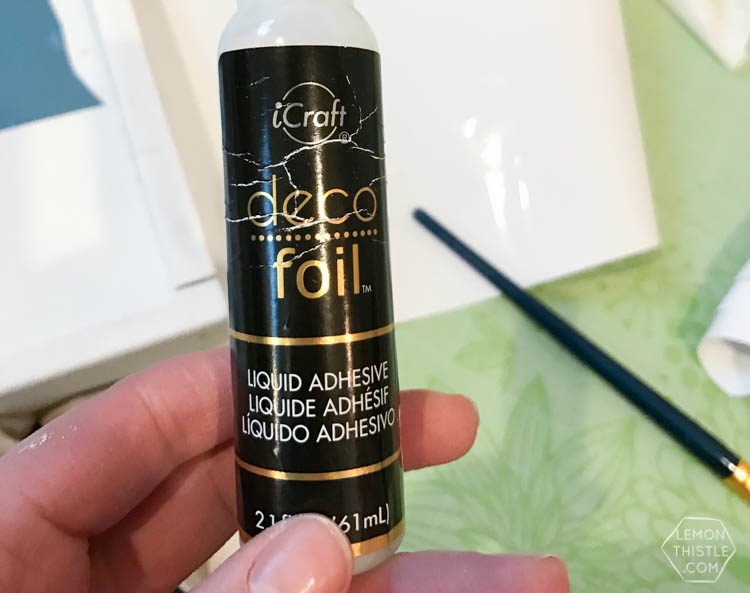 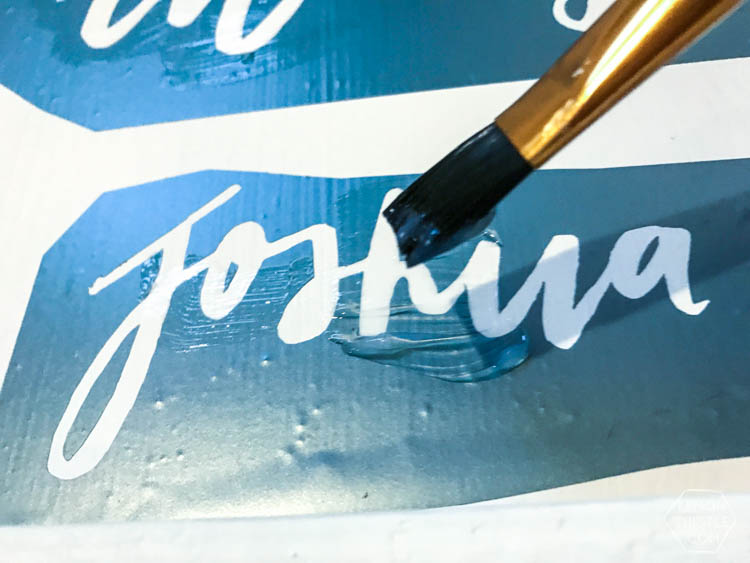 So there’s a few ways to do this. The method that was recommended to me was to brush the Liquid Adhesive on. It comes in a squeezy bottle, so I sqeezed it out and brushed it on over my vinyl stencil. It was looking so darn good… then I peeled back the vinyl. Do you remember that kids nail polish you used to get that could peel off? How if you got some on your cuticles and tried to peel that part off, the rest would kind of peel up too? Okay… so as it dries, the adhesive kind of does that. And what I mean is that if you waited and peeled back the stencil when you were ready to foil, you’d end up with imperfect edges. SO the key is to do one word at a time and then peel the stencil off before painting on the adhesive in the next word.

So if you get that right, you’re golden… right? Well here’s another tip. The adhesive dries much quicker than it says on the bottle if you brush it out instead of using the squeeze bottle. This is because it’s much thinner this way. Mine took about 10 minutes to dry to the point that it was ready to be foiled. If you foil before it’s dry to the point of tacky though, it will get adhesive on the back of the foil and that piece of foil will be ruined AND it will smudge the adhesive shape you’d stencilled on. If it dries too much and you can’t transfer the Deco Foil to wood, that’s okay because you can always add more adhesive to that spot later.

When it comes to applying the foil, I have treated it like vinyl in the past and used a scraper to get it pressed on firmly BUT I found it was WAY more effective to press down instead of across. Scratching the foil on (with a scraper like you would vinyl) can negatively affect the shine of the foil.

Okay so that’s using the liquid adhesive. Notice the nice brush stroke effect from brushing it on? I also tried the adhesive pen and it worked AWESOME. It doesn’t give you the brush stroke effect of course, and if you wanted to do a larger space it would be a total pain to spend the time coloring it in BUT for lettering or little polka dots? Perfect. That’s what all those little dots are done with. I will probably do another wood sign like this, just freehanding with the pen because it is so much quicker and I’m an impatient crafter.

Last but not least! I did NOT do this BUT if you want a really clean edge for your foil and smooth with no brush strokes- I’d suggest using the Hot Melt adhesive sheets. It’s cuttable with something like a Cricut so you could cut your shape, iron it on and transfer the Deco Foil to wood. I have some and I’m totally going to test it out another time. 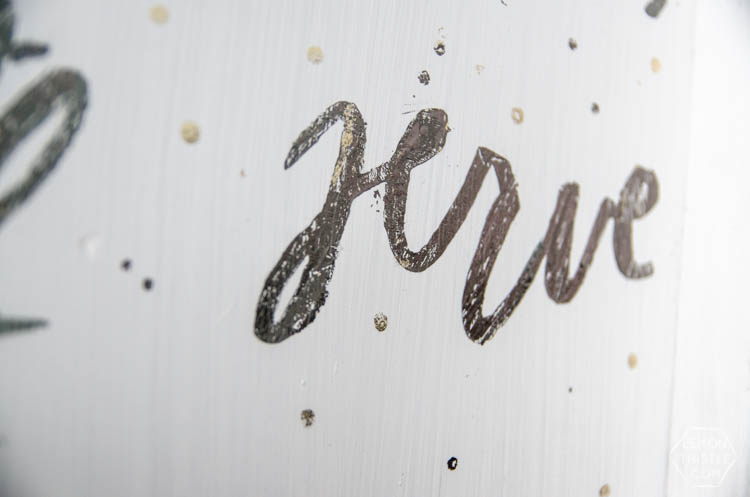 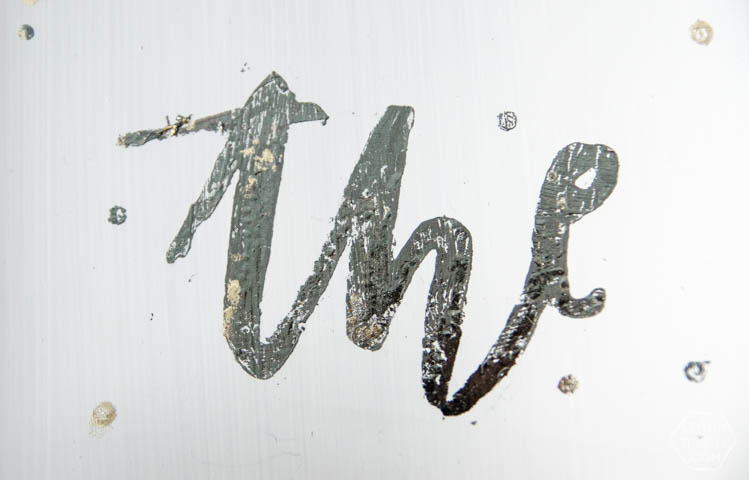 To add the gold foil detail over the pewter lettering, I used some dabs of the adhesive on top of the foiled letters to transfer the gold. Again- I so love how that detail turned out! I tried to get a close up of it without reflection so you can see what I mean. 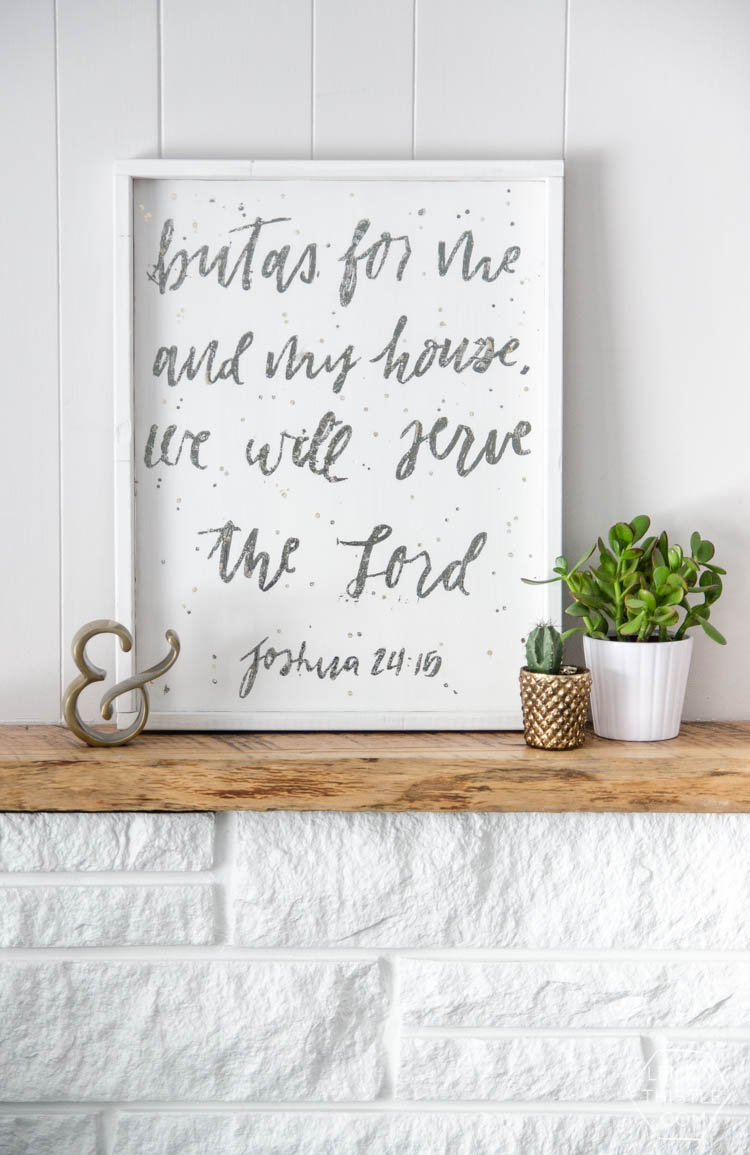 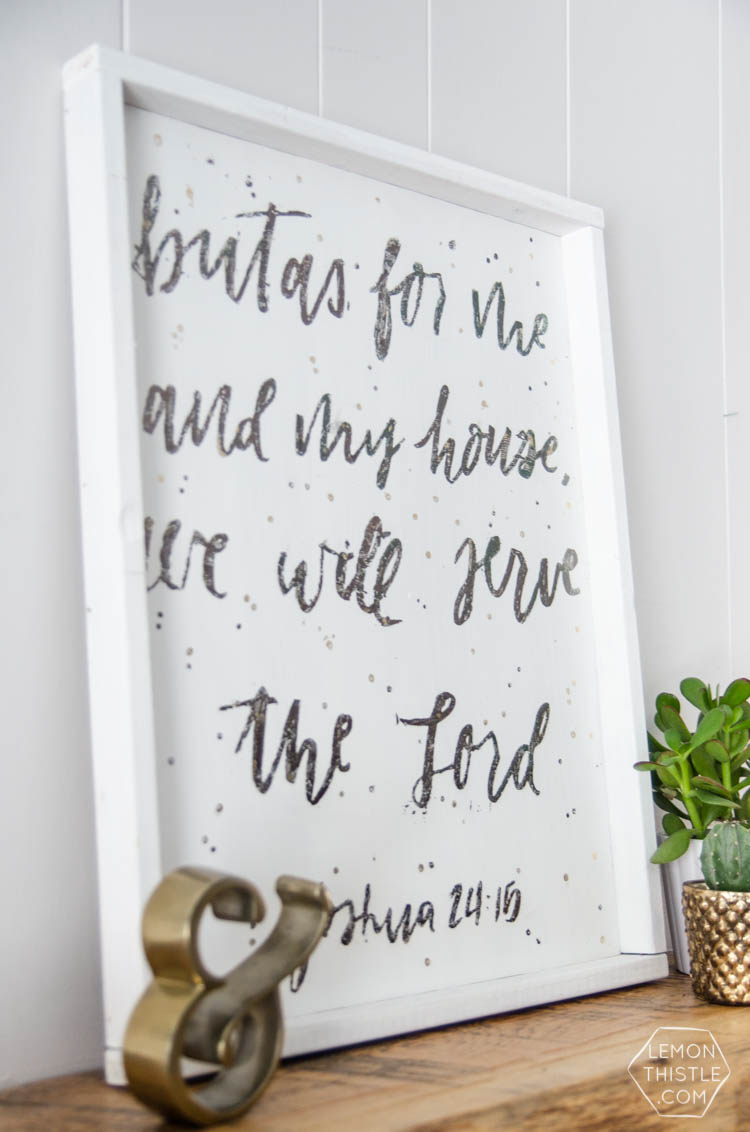 *phew* that was a lot of info, right? Before I go- I made the sign just using a piece of plywood cut to size and sanded and 1×2 on edge for the frame. Simple. 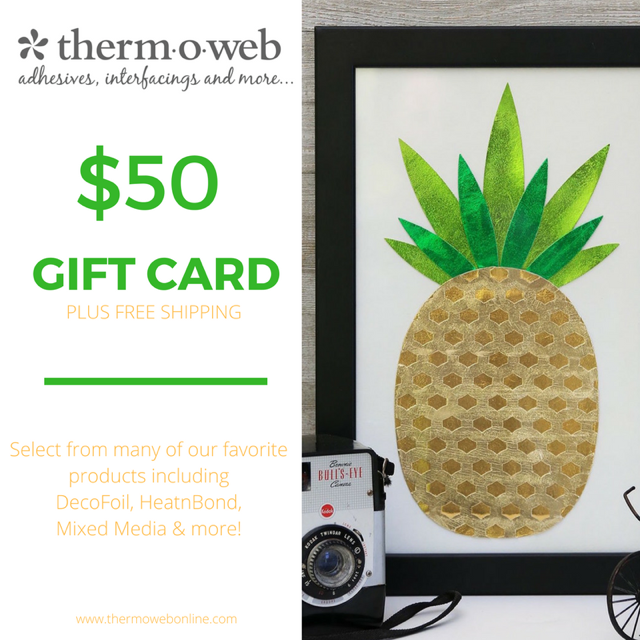 Alright… want to win some Deco Foil for yourself to try out? My friends at Therm-O-Web have been generous to give away a $50 GC (and free shipping!) to someone. Enter using the Rafflecopter below! And if you win- be sure to show me what you make with it. Good luck! 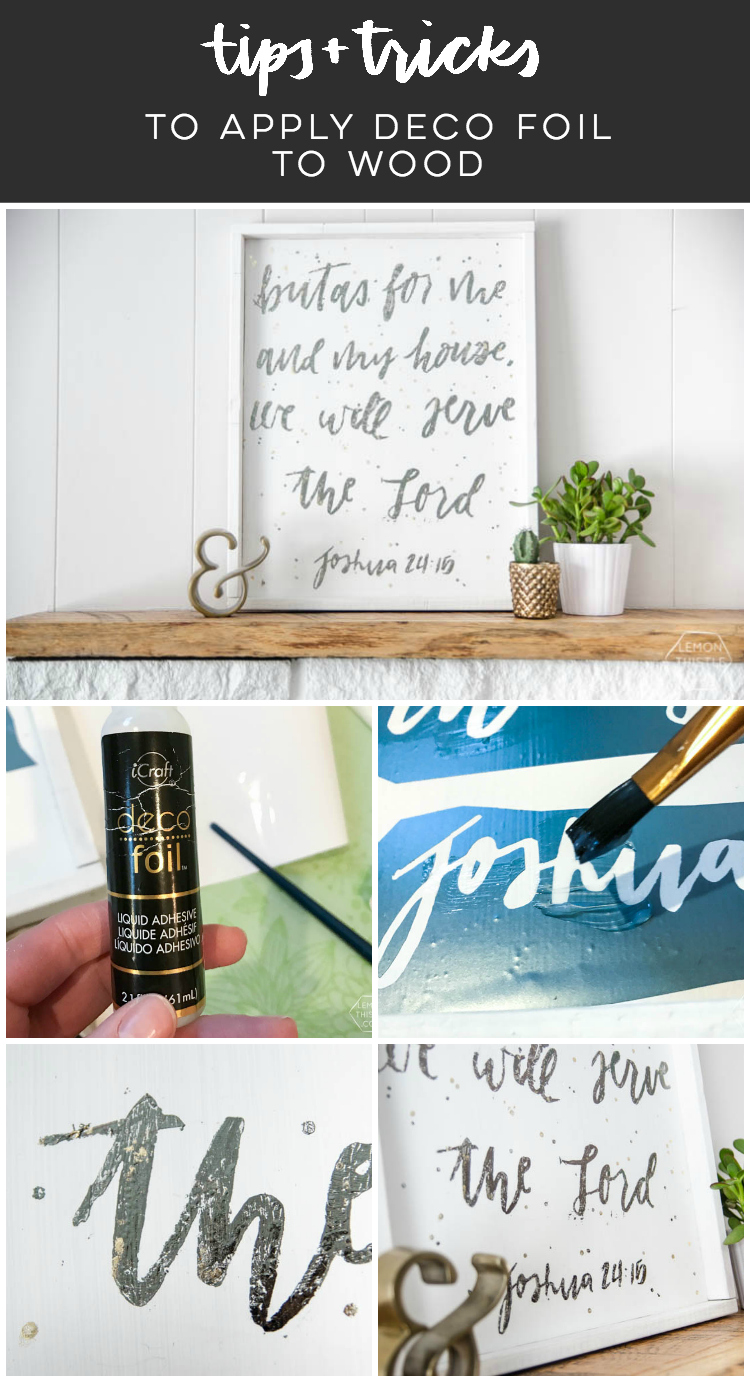