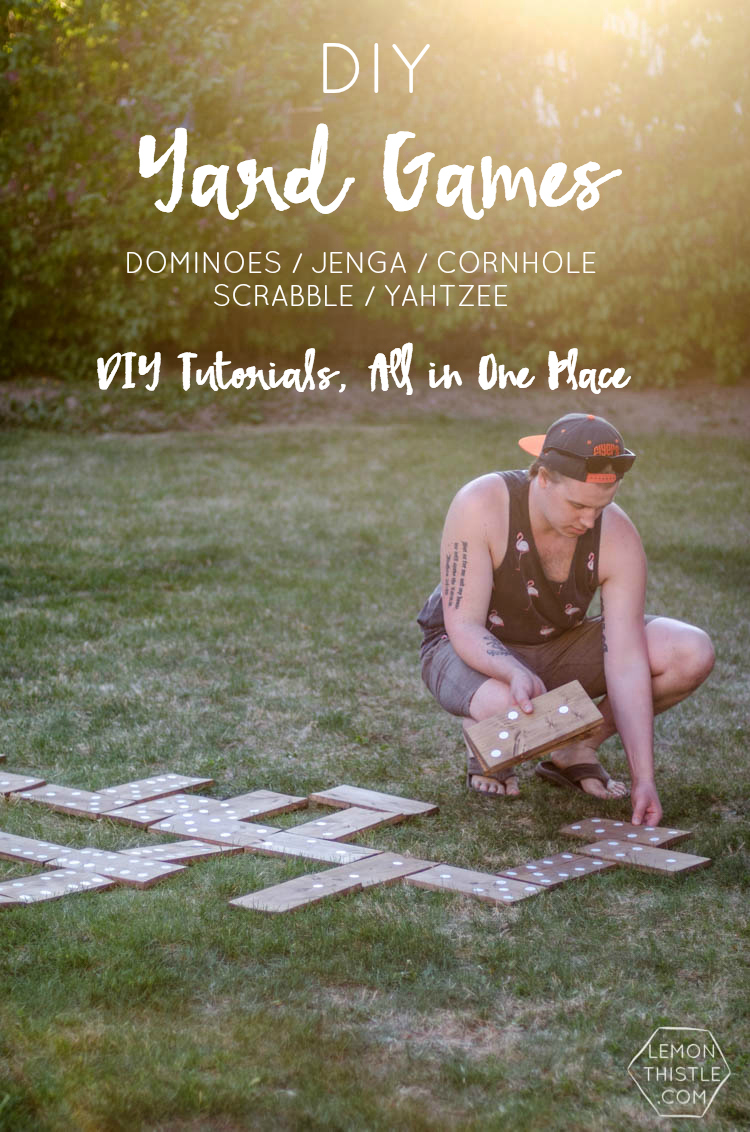 This weekend we hosted our first barbecue of the season (woohoo!) and the weather was SO beautiful. We actually came inside after a few hours because the kids weren’t used to the heat- it was that nice out. We had some of our family over to test out our new DIY Yard Games and I’m so excited to share them with you today! I’ve got five awesome giant yard games coming your way, and that’s a lot of tutorial talk, so I thought I’d split it into two posts. I’ve got Jenga, Dominoes, and Yahtzee today for you and next Monday I have Scoring Anagrams/Speed Scrabble and Cornhole! 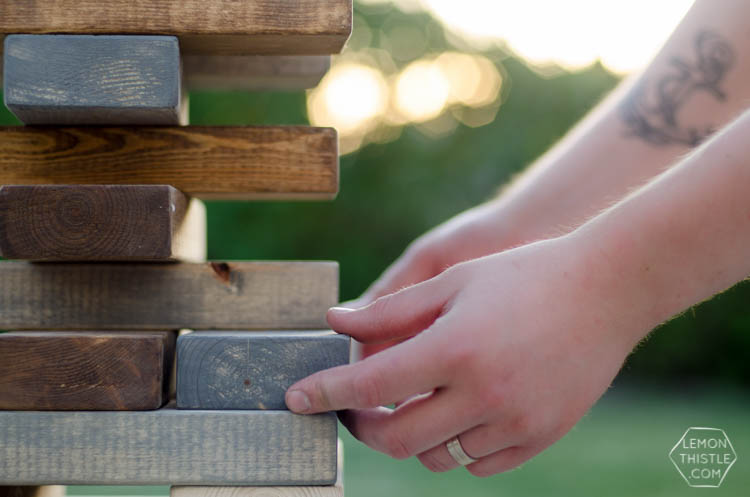 I’ve been dealing with some serious Pinterest envy over massive Jenga games and other back yard games for a while now. I decided that it had to happen as soon as we possibly could and when I mentioned it to Shane, he not only loved the idea but suggested we make a whole suite of DIY yard games. So far we’ve made five but we have plans to make a few more later this summer as well. Since making them last week (*ahem, finishing them right before our barbecue*), Shane’s work has already called dibs on them for their summer work party. It’s safe to say we’re loving these DIY yard games!

I’m hoping by giving you all of the tutorials in these two posts, that you won’t have to do a ton of digging around the web to do the same. It took a lot of research to find all the information to make these games! There’s about 100 tutorials on giant Jenga- but only one I found recommended a sealer for the wood. We are building shelves on the outside back of our shed and want to store our games outdoors. That means we NEED to seal our wood if we want it to last. All of these games are sealed (I’ll tell you which I chose and why), all of these tutorials have measurements, and I even managed to snap photos of some of the steps. And that’s an accomplishment when you have 100 Scrabble tiles to paint (yep, there’s 100!). I also hope that you’ll only need to take one trip to Home Depot to get everything you need (I may or may not have had to go back once or twice to get it right). So let’s hop to it. 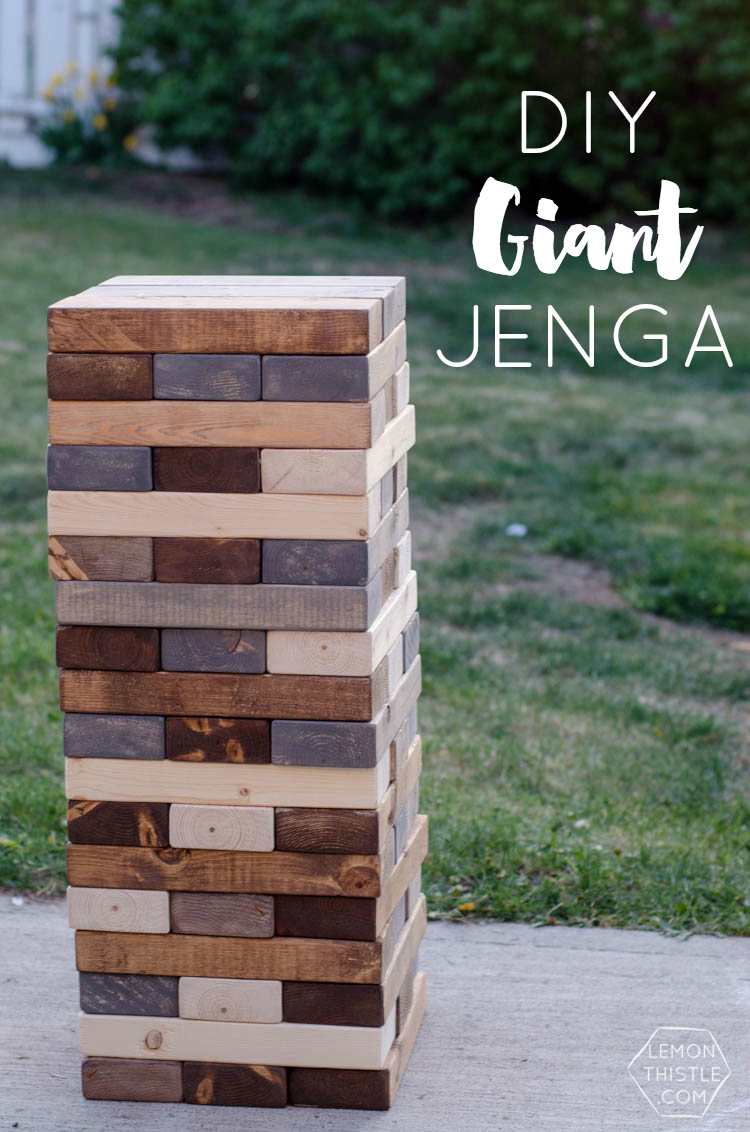 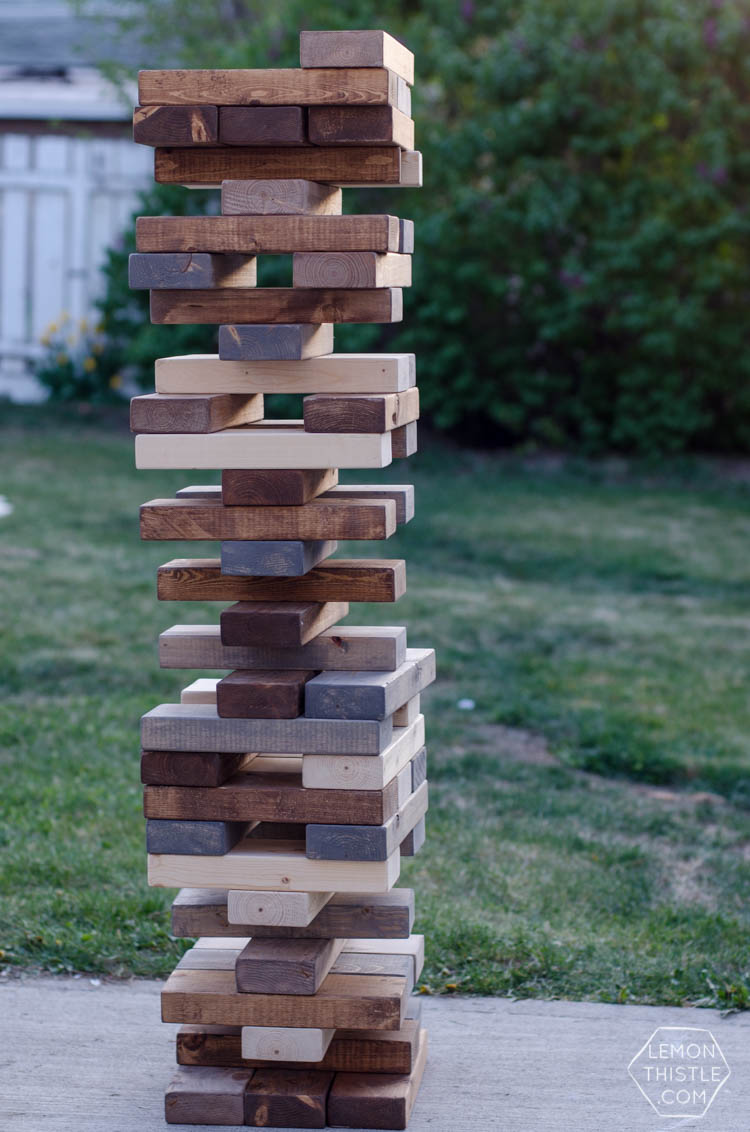 Let’s start with the most popular/ everywhere you look game, shall we? Jenga is such an easy playing game and it gives the thrill of faster paced games (it could fall at any time!) but you can still carry on a relaxed conversation as you play. I’m a fan. Here’s what you’ll need to make your own: 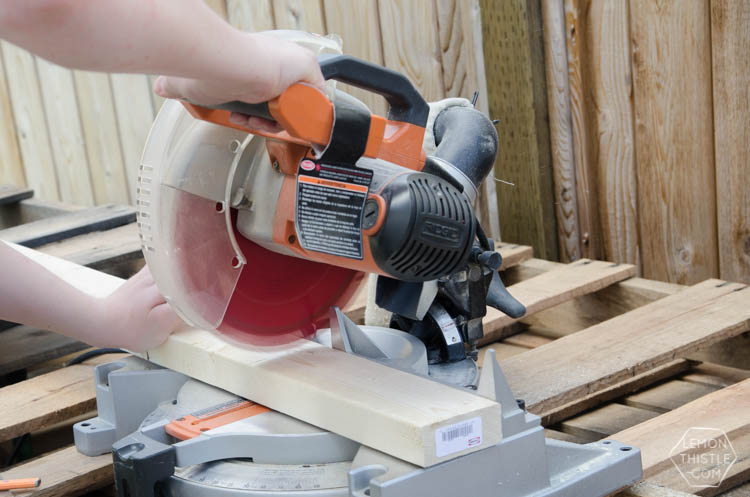 Start by marking out your two by fours a hair over 10.5″. Jenga towers are square if you look straight down at them. Since there are three 2x4s wide, they need to be cut to that length. The tricky part is that 2x4s are not actually 2″ wide, they’re only 1.5″ wide. So the measurement is 10.5 but your saw blade will take off a bit too, so try mark just outside your 10.5″ measurement along the boards. When they’re all marked, go ahead and chop your 2×4 into 54 pieces! Make sure you have a sharp blade to cut down on the amount of splintering (and sanding!) you’ll have.

Once they’re all cut, the fun part… sanding! I say the ‘fun’ part because this is what we did with the majority of our free time last week. We even invited some friends over for pizza to help us. It takes longer than you’d imagine! You could use a palm sander, but we enjoyed chitchat while sanding by hand. The idea is to get the sides all smooth enough that the slide when you’re playing Jenga. Additionally, sanding helps the wood take the stain more evenly. When they’re all sanded, wipe them down with a damp cloth to get the sawdust off. 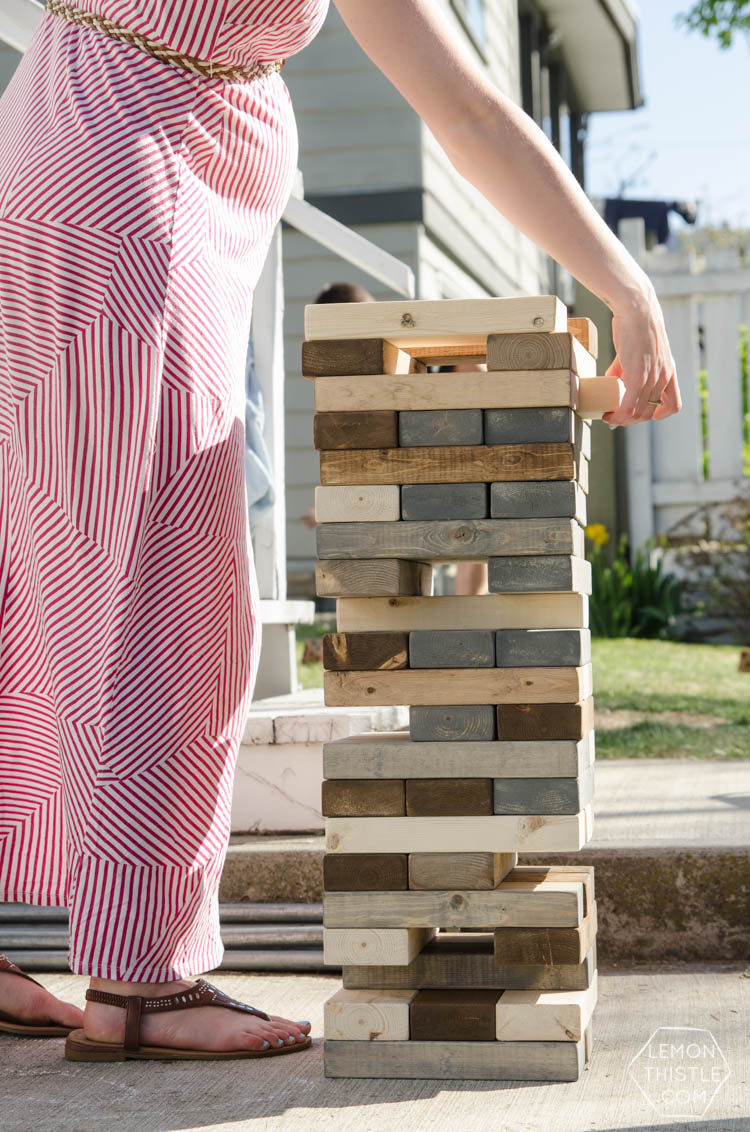 I chose to stain my Jenga pieces with three different colours of stain and left some natural. The stains I chose were all from Minwax Wood Finish: Early American, Classic Grey, and Weathered Oak. The Early American is my new favourite colour, it is the darkest one! You could also choose to leave your wood natural and skip this step. To stain, work by staining (wiping on with a rag) one of the large sides, plus all the edges in one go. Then, flip it over and stain the final side. You’ll need a large space to lay them out while they dry. You can see a photo of the staining process under the Dominoes tutorial. 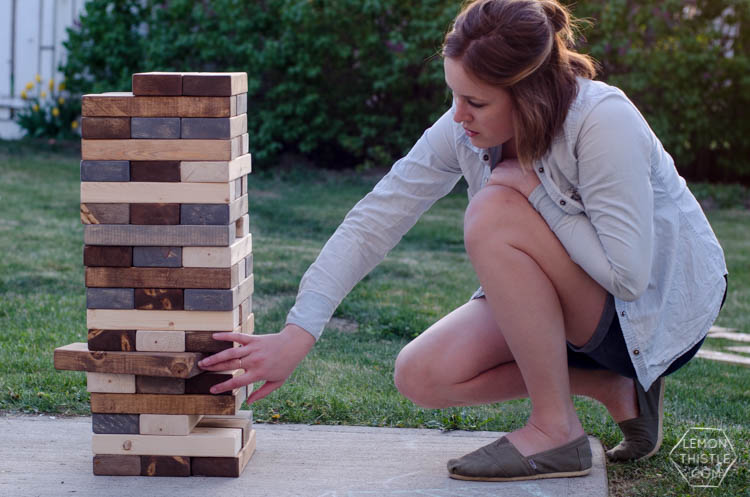 When that’s all dry, you can go ahead and apply Minwax Finishing Paste. The only other recommendation I found to seal the wood is Hemp Seed Oil. 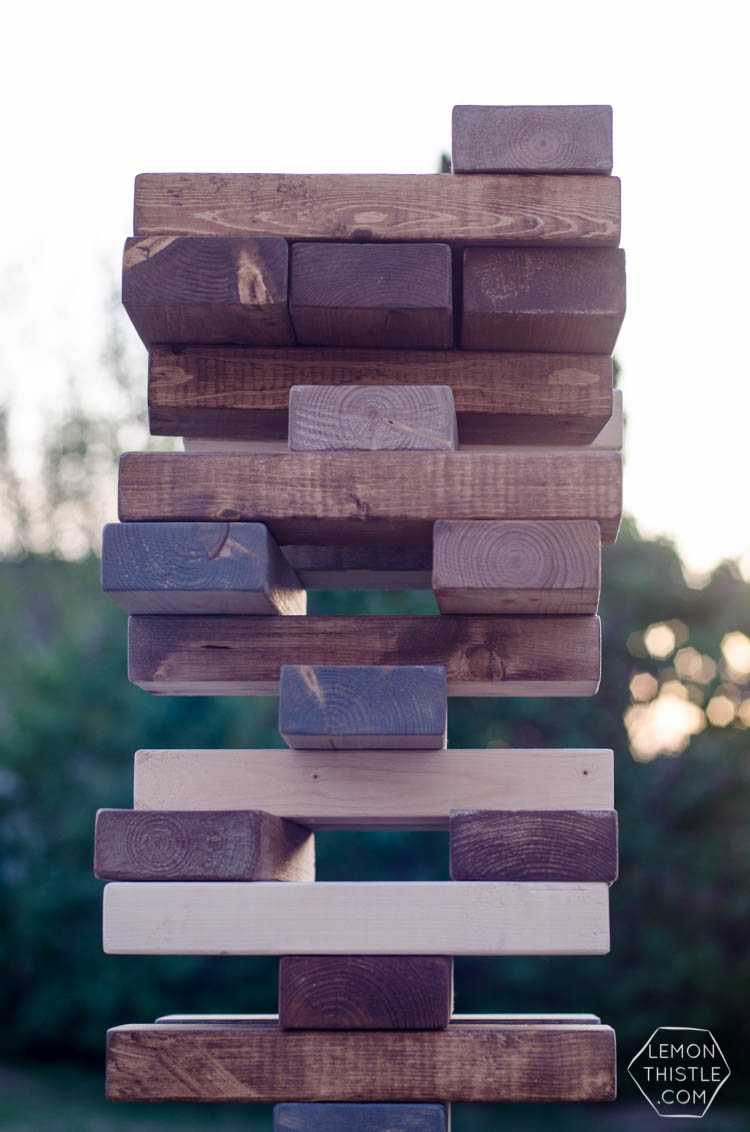 If you’re not sure how to play Jenga, the general idea is that you stack the blocks (as shown in the first photo) three wide, alternating directions. Then, players take turns removing a block by only touching that one block and stacking it on top of the growing stack. It will slowly get more wobbly and difficult to remove pieces as you go. When the tower topples, that player is the ‘loser’ but really, the toppling is the best part! See? 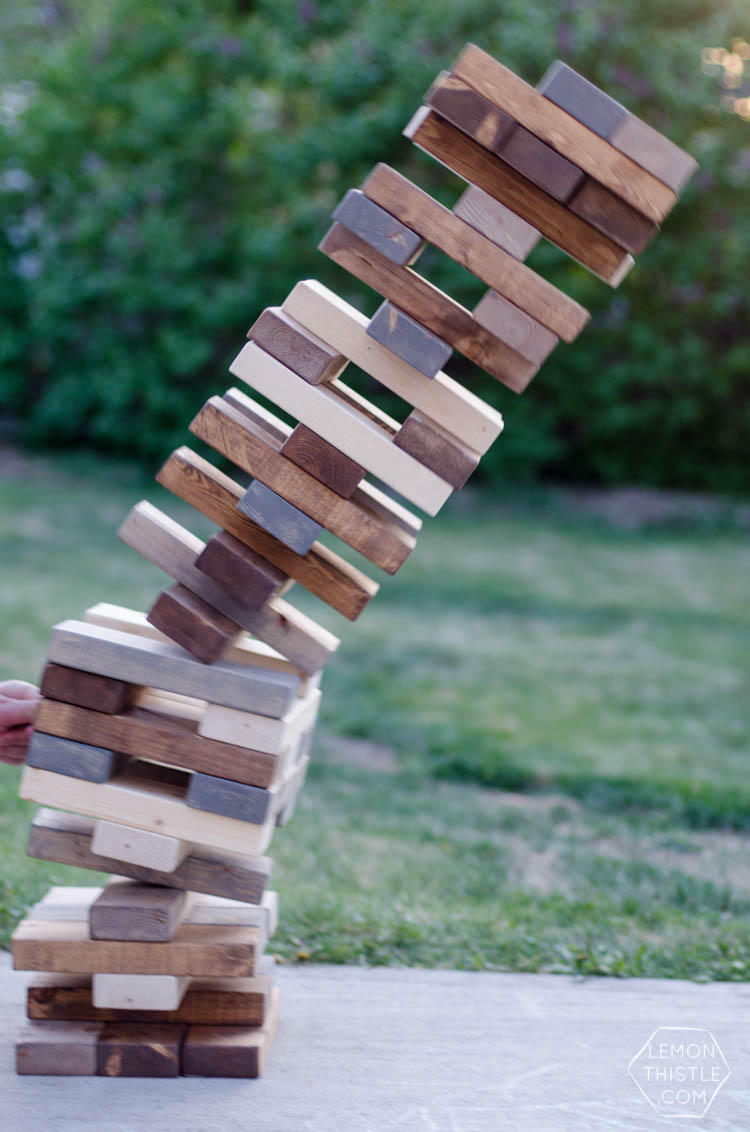 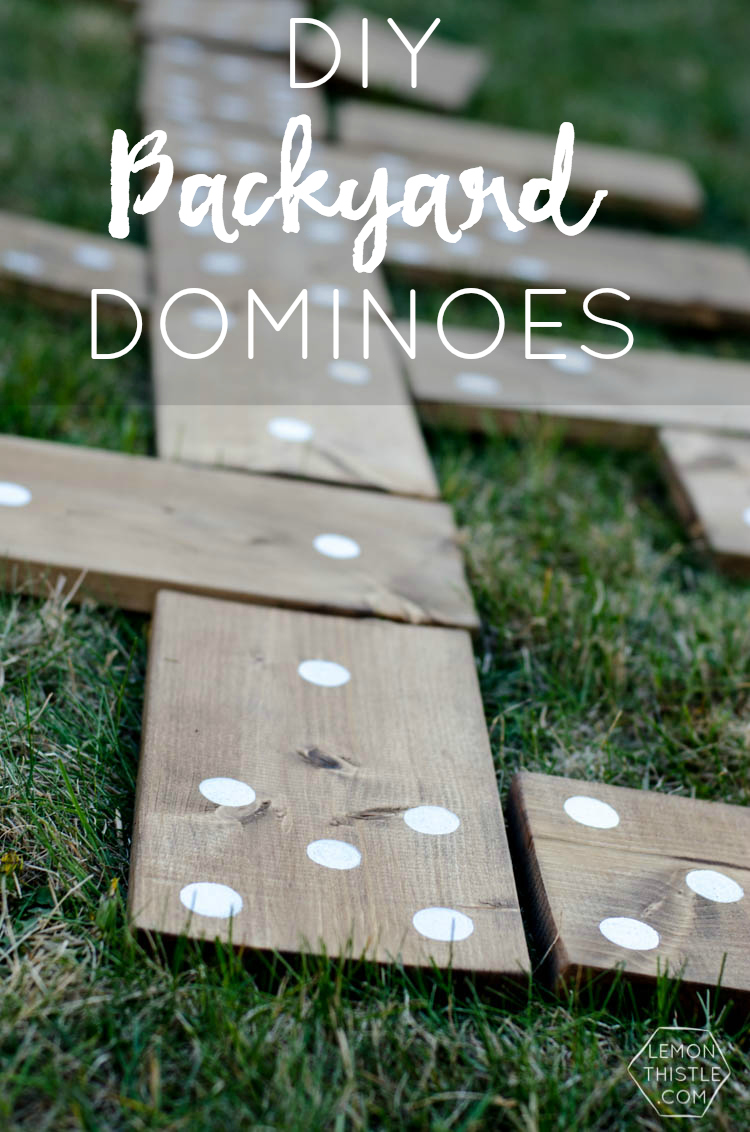 Next DIY yard game? Dominoes! Before making these dominoes, my hubby (and his brothers) had never played an actual game of dominoes (have you?) they had only played where they stand the dominoes up and make a long trail that collapses (also fun). If you have never played ‘real’ dominoes either, you can find the Basic Rules here, but there are 101 games to play with them. So these should never get old! Here’s what you’ll need to make your own DIY giant dominoes:

Start by marking and cutting your 1×6 boards in 1 foot pieces. The math here is that dominoes are twice as long as they are wide. You will need 28 pieces. When they’re all cut, get to sanding. Although they don’t need to slide (like the Jenga pieces) sanding is still good to have a smooth surface, and help the stain penetrate more evenly. 1×6 Boards seem to be a bit smoother than 2x4s so this should be an easier job (plus there’s less of them!). Wipe them clean of any sawdust with a damp cloth. 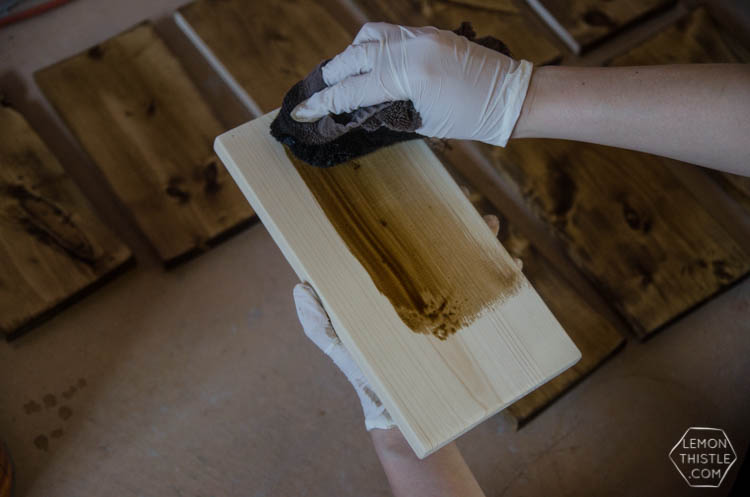 You could choose to leave your dominoes natural colour, or you could choose to stain them as I did. I love the look of white dots on dominoes and the natural wood just wasn’t dark enough for that. I used Minwax Wood Finish Early American Stain. Wipe it on with a rag (make sure you’re wearing gloves!), following the same process as the Jenga: stain one of the sides plus all edges; let dry then flip and stain the second side.

When the stain is cured (you wont be able to smell it anymore and it will be dry to the touch), you can paint your domino dots. I used Rust-Oleum Ultra Cover and love that I only had to do one coat. I used a 3/4″ spouncer (basically a round sponge brush for dabbing- I like the Martha Stewart brand) to create the dots. I used this image to track which tiles I’d completed. The gist is you make one tile for each combination of 0-6 for a total of  28 pieces. This goes quickly, I got it done in one episode of Friends on Netflix. When the paint is dry, you’ll want to seal your dominoes. I chose a spray on sealer for ease. I use Rust-Oleum  Painter’s Touch Clear in Satin for almost everything.

That’s all there is to it! Then teach your husband or friend how to play dominoes and enjoy beating them ;) 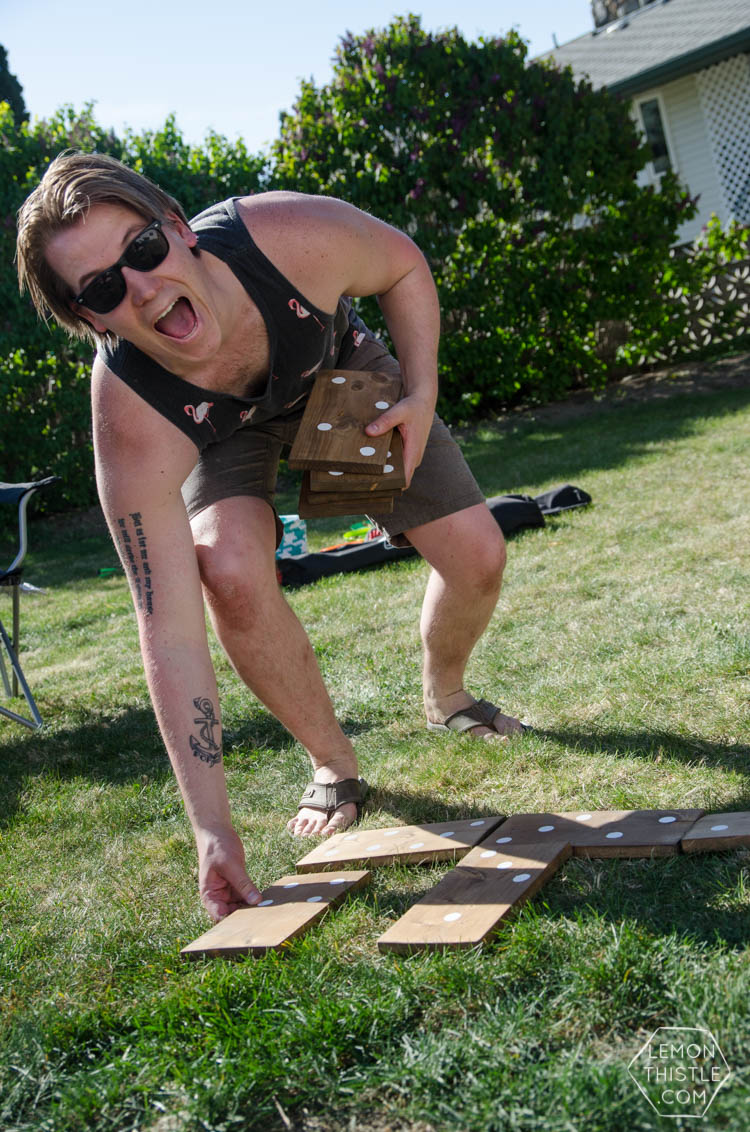 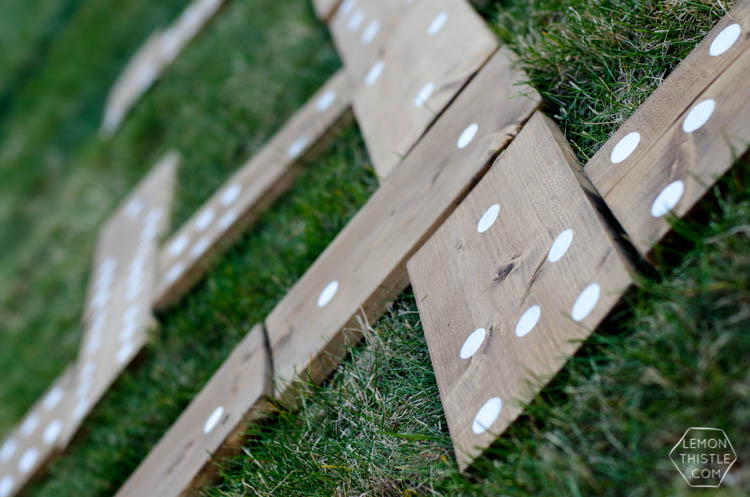 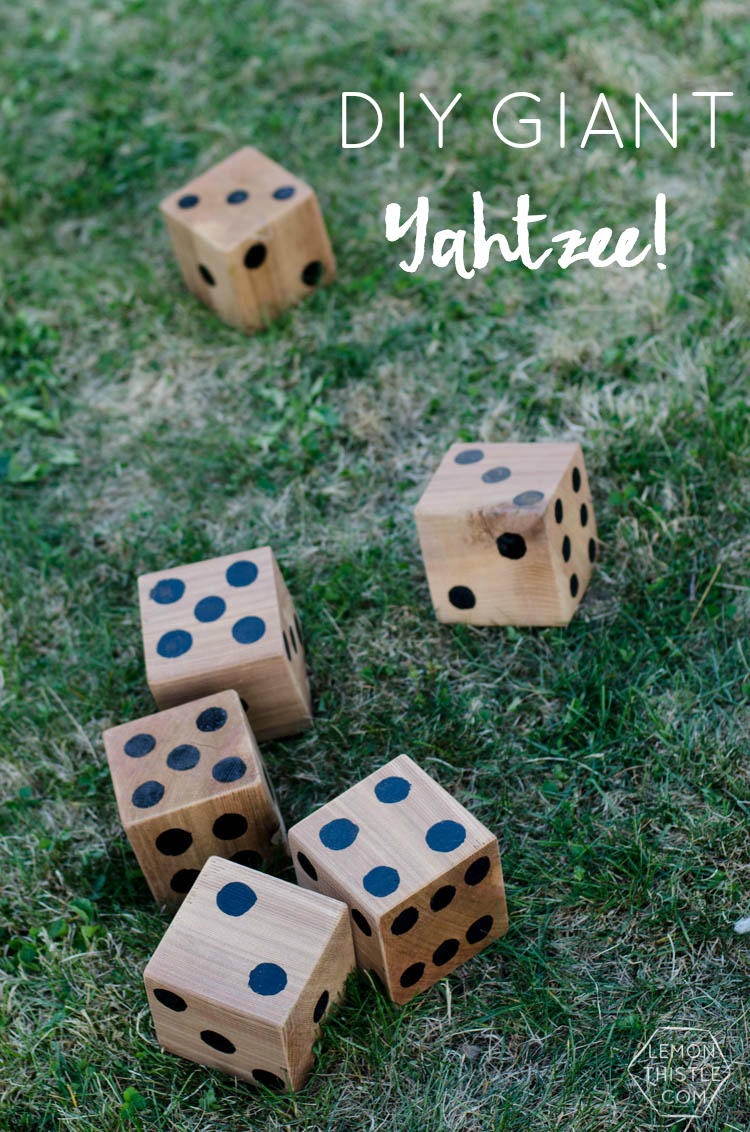 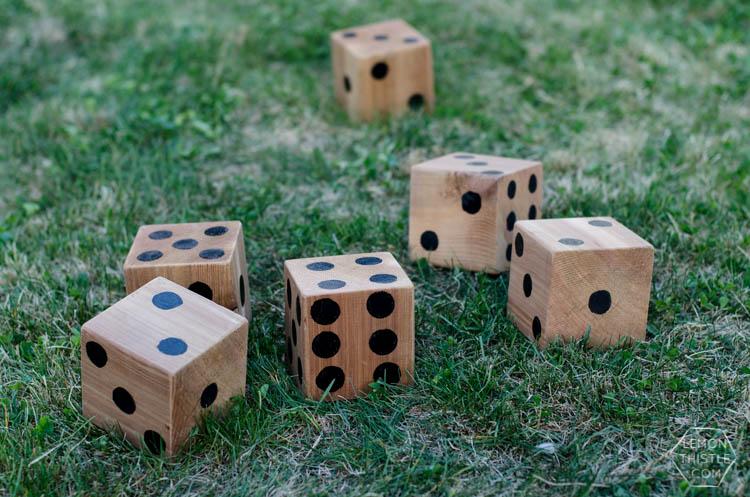 Yahtzee was one of my favourite games as a kid. It was complicated enough that I felt like it was an ‘adult game’ which makes anything cooler (I also loved Canasta, if that tells you what kind of nerdy kid I was!). We did have a Disney version though which made learning the rules easier. When I suggested this game to Shane he was mostly excited to have giant dice- he didn’t care much about the game rules *sigh*. We went really basic on this one, but there’s some fun things that you can do if you want to (we might in the future). Here’s what you’ll need to make your own:

To paint your dots, I recommend using spouncers (the round foam dabbers), I started painting the circles on and realized how much of a pain this was halfway through. So I switched and kicked myself for not thinking of it sooner! I used Rust-Oleum Ultra Cover in Black Gloss for this and again, I love that I only had to do one coat. I’m used to craft paint where everything takes more than one coat so this was a treat for me. To map out which sides of your dice get which number, I used this photo.

Then, I gave them a spray with my Rust-Oleum Painter’s Touch Clear Satin to seal them. 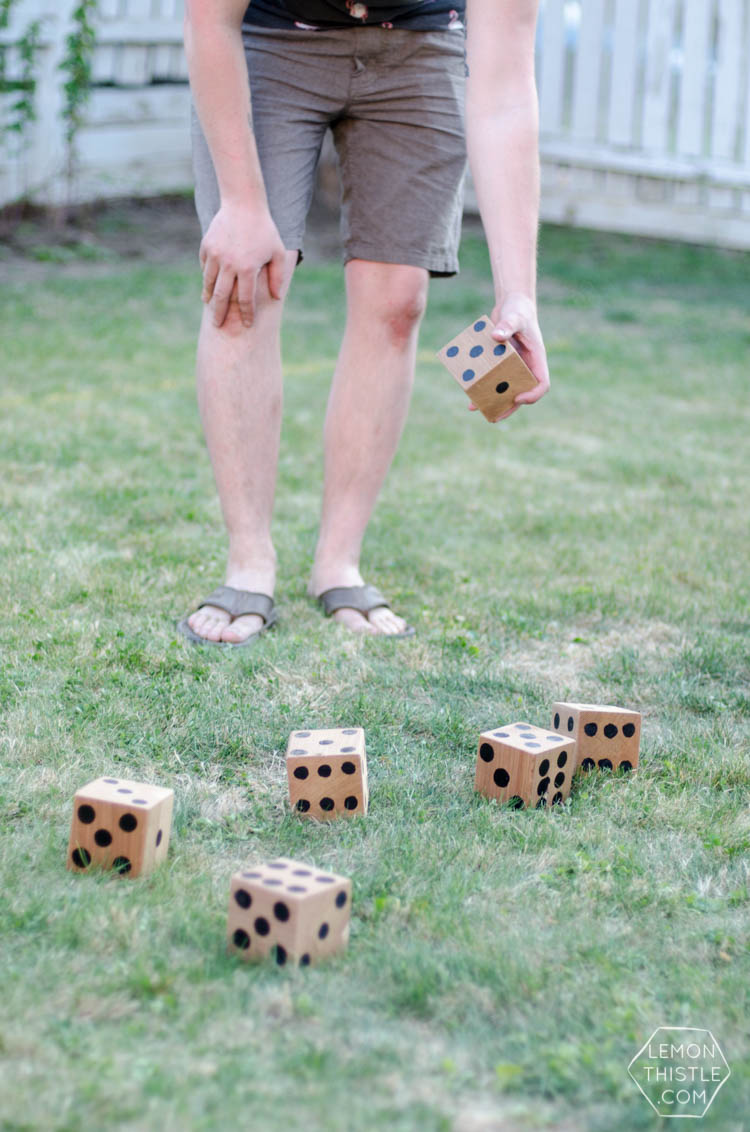 We just rolled the dice with our hands and kept track of points on paper BUT there are some options for you here. I’ve spotted that the dice can be rolled in 5 gallon buckets (that you can get for just a couple dollars from Home Depot). 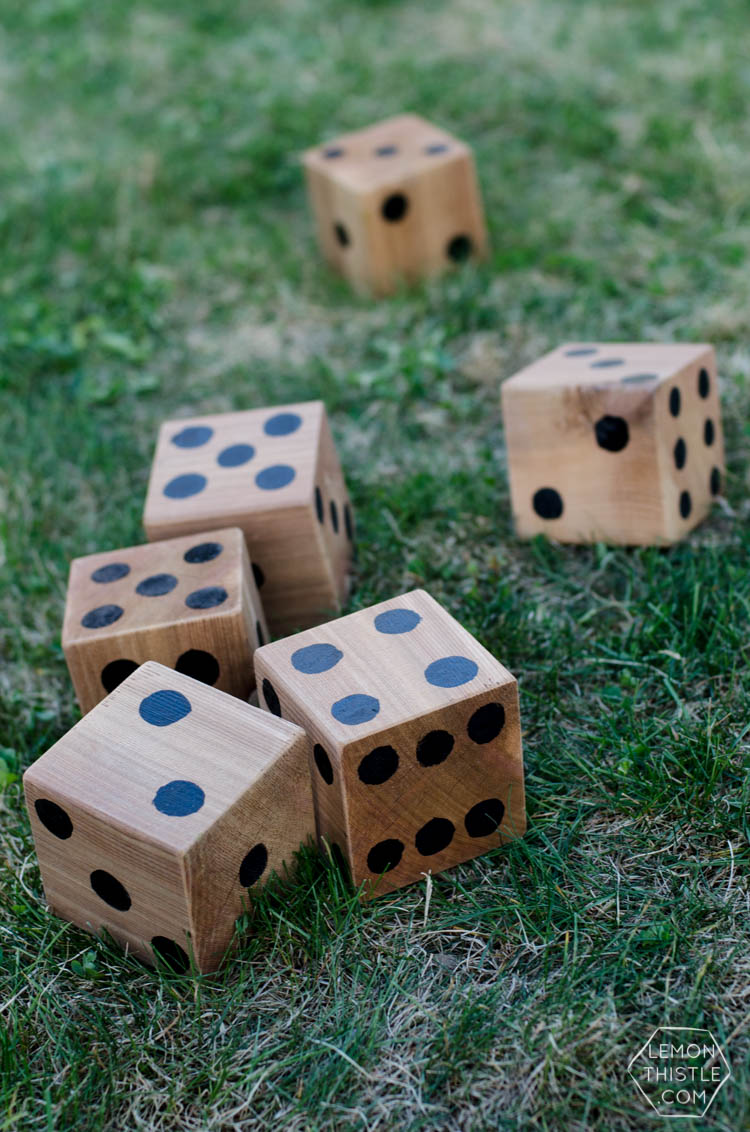 Whew- that was a long post! Aren’t you glad I’m breaking it up into two posts? I know we’re going to have many summers full of yard games ahead of us, and I can’t wait! I’d love to hear from you if you have made any yard games or if you ever would? After living in an apartment for the better half of our marriage, we’re so excited to have a yard that we pretty much want to live in it now. We also want to do something about our grass. But it’s only April, so there’s hope… right?

Make this? I’d love to see! Tag me @colleenpastoor on social.