I made this confetti shadow box a couple years ago and updated it when we re-did the twins bedroom, but I totally forgot to share it with you here! This would make an awesome gift or a fun addition to your gallery wall… or really any where in your home. There are few things more fun than confetti and I love how it brings some celebration into my kiddos room (without all the mess). I’m going to go ahead and share the directions as I wrote them a couple years back. The biggest change I’ve made is just choosing a colour palette that fits with the twins’ big kids room design. I love how by sitting the frame on the dresser like this it looks like it’s part of the gallery wall. 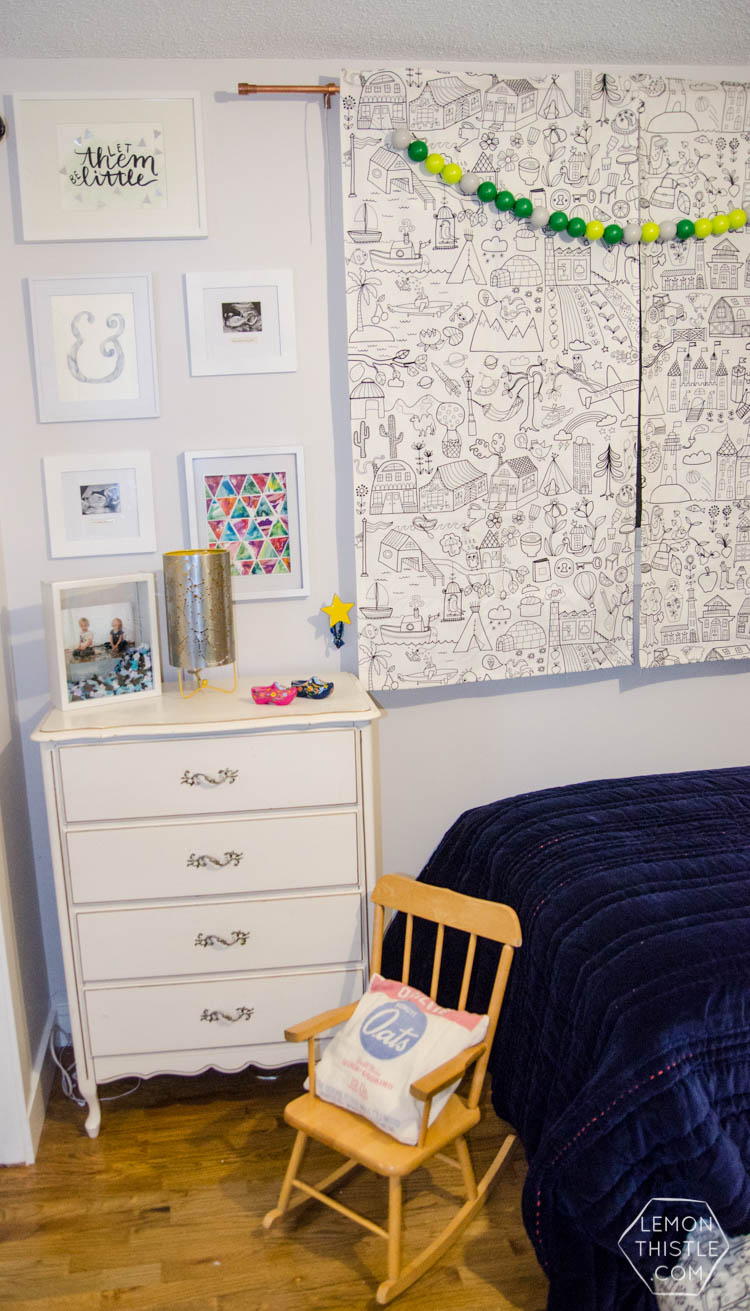 But before I share, want to know why I remembered to post this? It involves this shadow box, and all of the confetti… ALL OVER my house! The twins are climbing machines lately and one naptime they decided a sneaky little party was in order. I salvaged enough to put it back together but might I suggest you screw the lid on if you have wild children as I do? 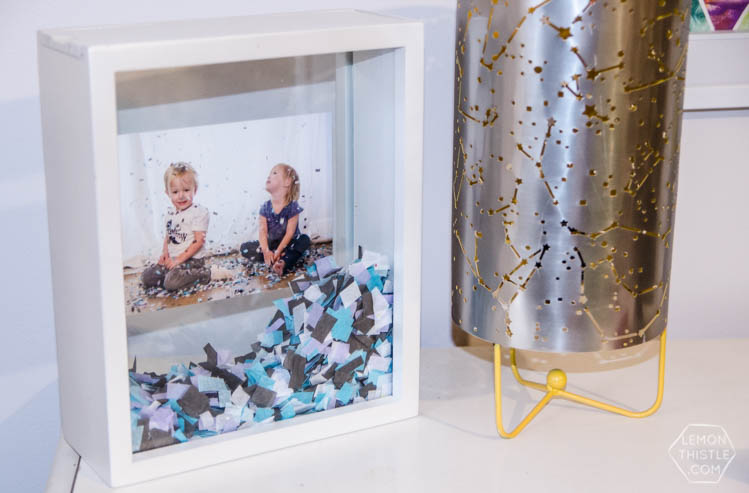 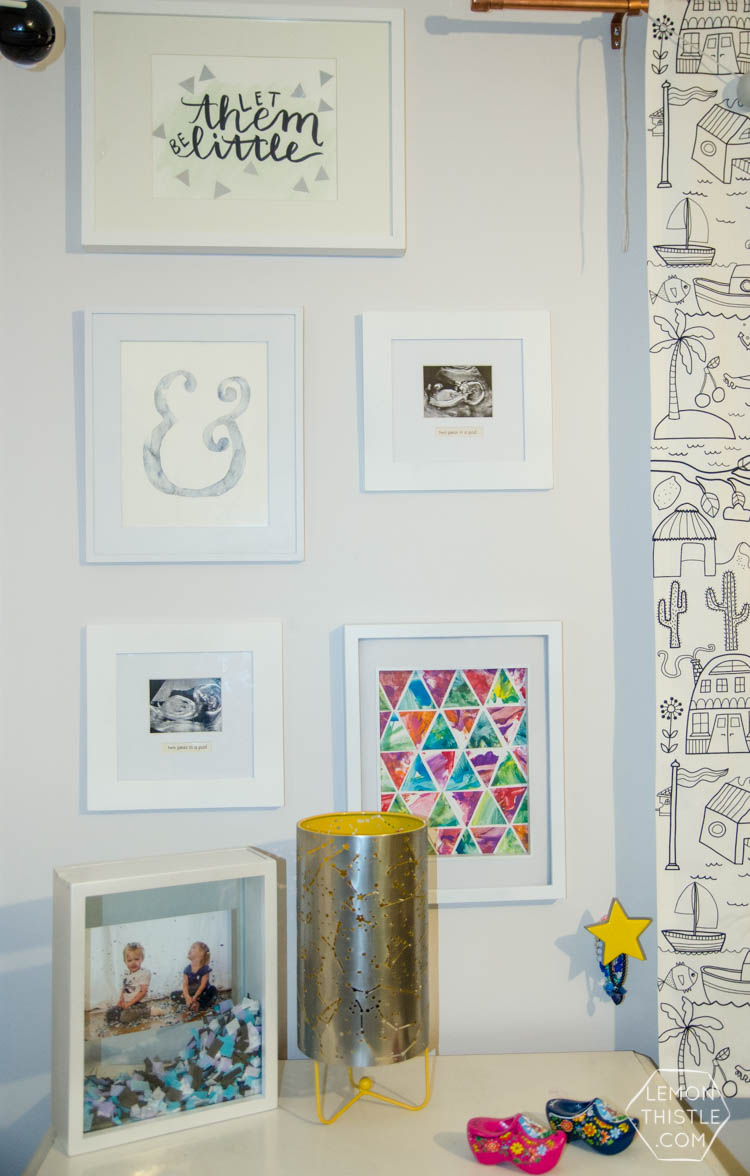 I’ve been saving confetti leftover from my Confetti Wreath to do a project with. My hubby was thrilled when I told him the rest could go in the trash after this. Yes, I had a garbage bag of confetti in my closet for almost three months- don’t you? Of course, so now that we’ve gotten the hoarding chat out of the way, let’s get to the DIY!

To make your own confetti filled shadowbox, you’ll need:

That’s it… pretty simple supplies list! Let me tell you a little about the confetti I used first. I made this confetti using tissue paper and although I’m sure you can figure that one out, I show how in my video DIY when I made my confetti wreath. I’m pretty sure this is the fastest way to make a ton of confetti in one sitting unless you use a paper shredder. 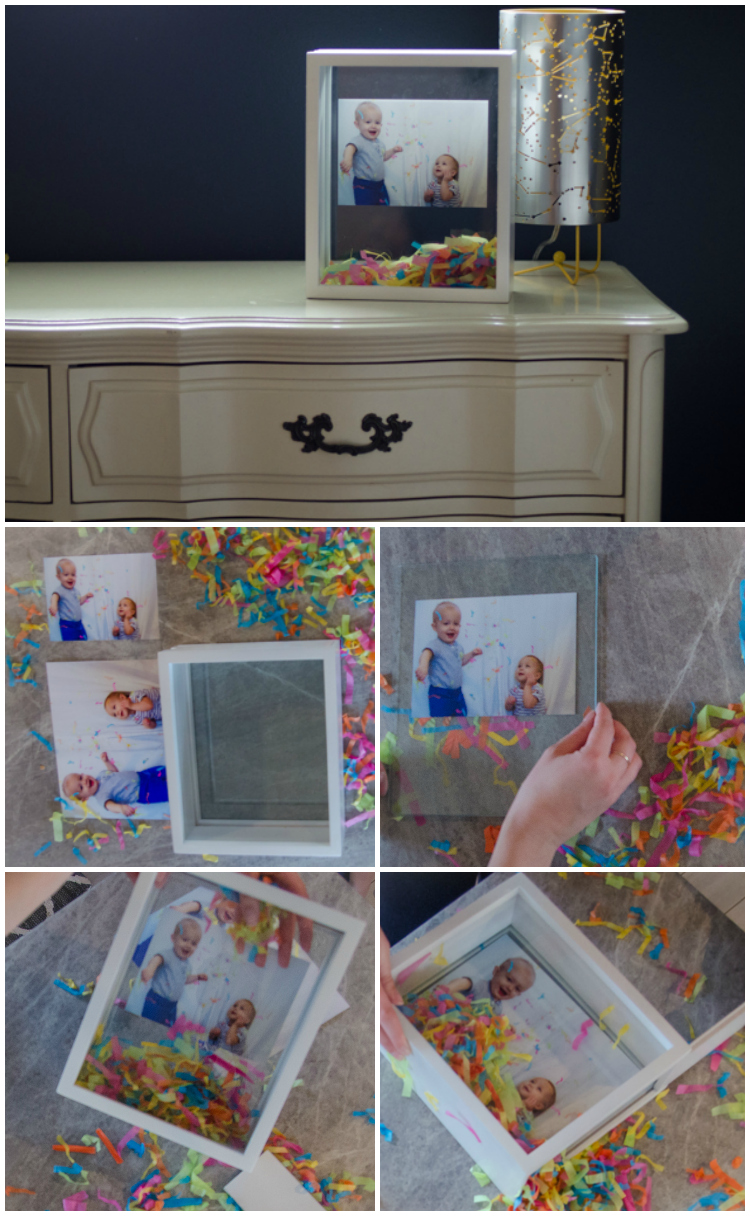 The fun part? Getting a confetti filled photo! Line your kids/ best friend/ good-sport-husband up in front of a plain background and start tossing confetti. I set my camera up on a tripod and set it to shoot ten shots at a time. I would hit the trigger then drop the confetti. It’s so fun to look at the outtakes on this one! I did this about five times until I got the shot I loved. That’s about when my kids decided the camera wasn’t fun anymore (confetti or not).

When you’ve got your shot, you can get it printed. Depending on your size of shadow box, you can pick which size you’d like. I got both an 8×10 and a 5×7 printed to see which I liked better. Oh, and then you’ll need to clean up all that confetti. My husband thinks a vacuum is the best way to do this, “it’s like I’m using a vacuum from space,” he said because the tissue is so light it practically runs into the vacuum.That’s just a bonus tidbit… if you clean it up with a broom, your shadow box will still look just as nice.

Now all you need to do is assemble it! I got my shadow box from Michaels- with a coupon of course. The photo goes on/in (depending on how your shadow box works) the back piece of glass, and your confetti goes in the middle. You can see I tried both the 8×10 size and 5×7 size photos before deciding on the 5×7.

Then pick a place to display your Confetti Filled Shadow Box! Mine is on my kiddos dresser for now, and they love it. Really, they love all pictures of themselves… but they also like confetti so it’s a double win. The best part is if you decide you want to use your shadow box for something else… just have to pull out the photo and confetti. What would you put in yours? Are you all about confetti too? I think these are great for adults too… how sweet would this be for an engagement session- a golden confetti fight with lots of kisses? And if you use that idea, please show me? I’m on social @colleenpastoor or shoot me an email!