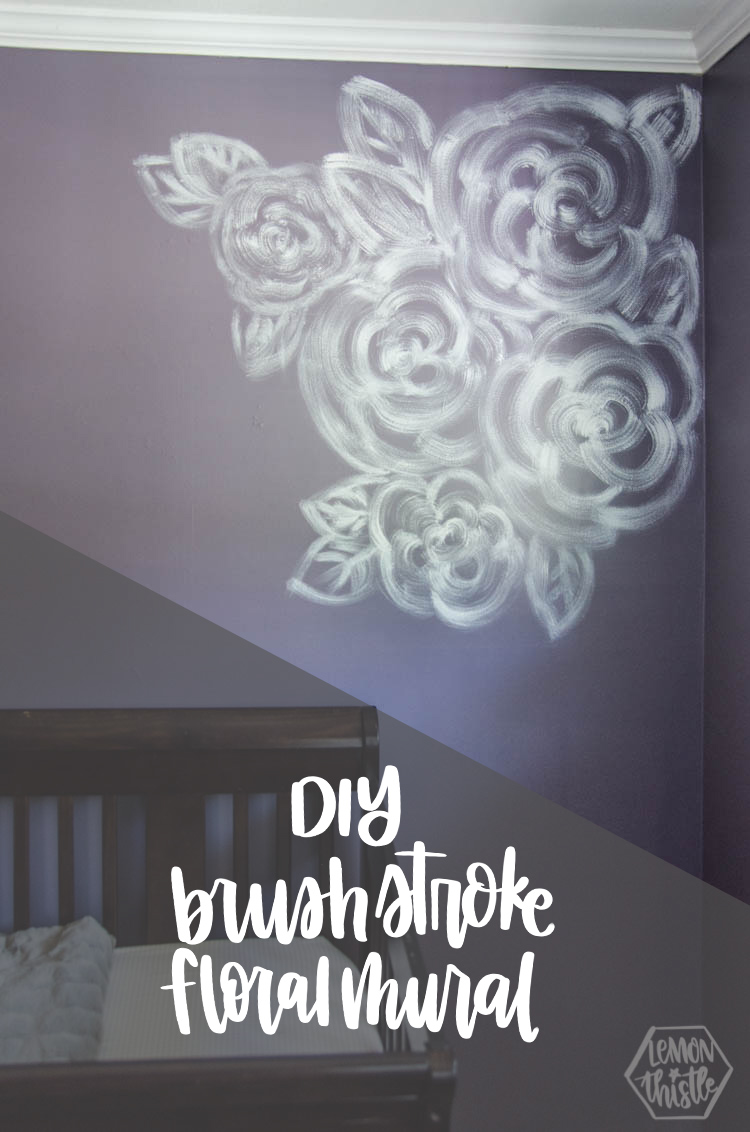 A wall mural? When we’re moving? You know it.

But this one’s not in my home! Today I’m excited to be sharing a little nursery refresh that I partnered with Premier Paint from Canadian Tire to give a friend of ours. This is something that was so fun to create for them but also so wonderful to be able to do for a family that we love. They were so game for going for a bolder colour (purple!) and when I brought up the idea of painting florals on the wall… they were all for it. I’m so grateful that they were totally open to my getting creative in this space, and it definitely paid off! 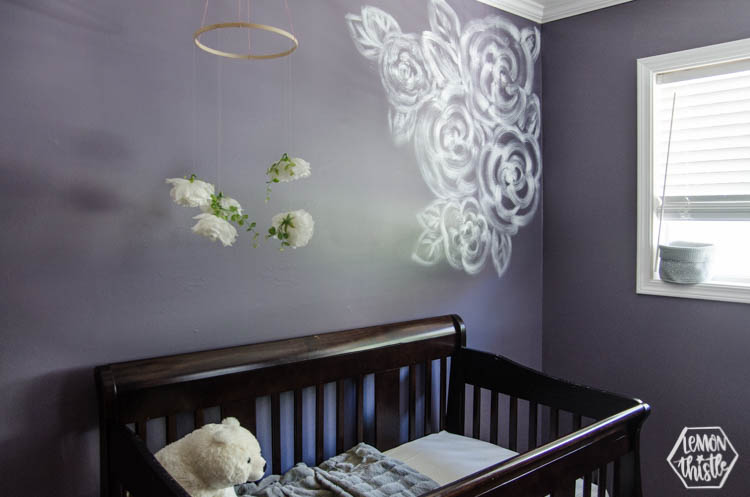 This nursery is for a baby girl that our friends are fostering to adopt. When they found out they would be able to bring her home, they didn’t have time to really create a nursery- so they moved in what they had and put up some vinyl stickers to make it girly. They were ready to hand over the paint brush and I got to play. Can I just say that it took me like 9 months to get Windsor’s nursery done and he was my 3rd. And I didn’t even paint. When Calder came along, he just took over Windsor’s nursery. If I was going to welcome home a 5th kid (which is what they’re doing!) I don’t think I would even get around to sticking up decals. So I think they were already winning. Before I get into the mural- I want to mention that I don’t know anyone else who rocks a big family like this one. When Shane and I were struggling with the decision of having a bigger family (4?!) or not, this is the mama that I talked to- because she handles it with total grace and ease. Anyways… let’s talk about the room and this fun mural! 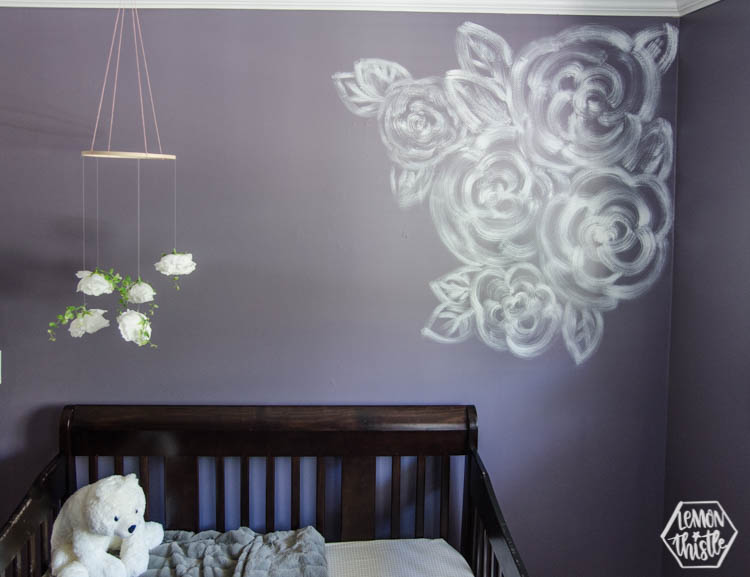 I really love the way this dark but muted purple makes the room so cozy and the white brushy florals pop against it.The base colour I used is Premier Paint’s Infinity line in Plum. It’s the perfect colour for this space. I actually took a vote on Instagram stories for this colour. I couldn’t decide between a more grey purple or a more purply purple and I went with the colour that won out. It was my favourite too and for good reason. It’s actually such a beautiful colour! We painted the whole room in a coat of this (the paint was so nice to work with, the coverage was really great!). 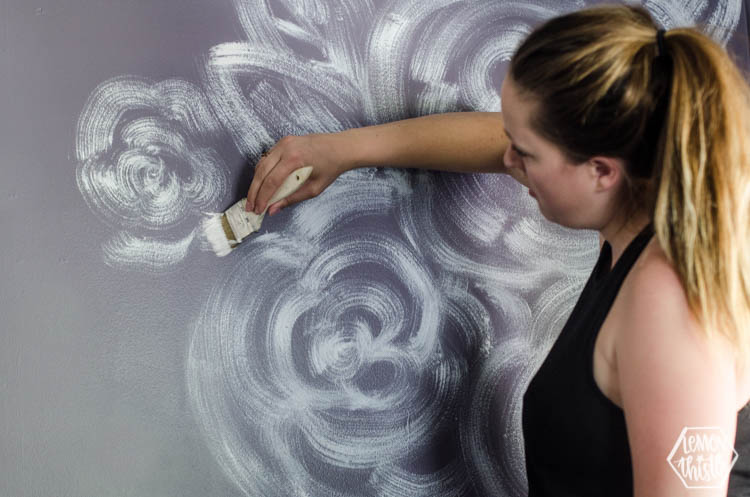 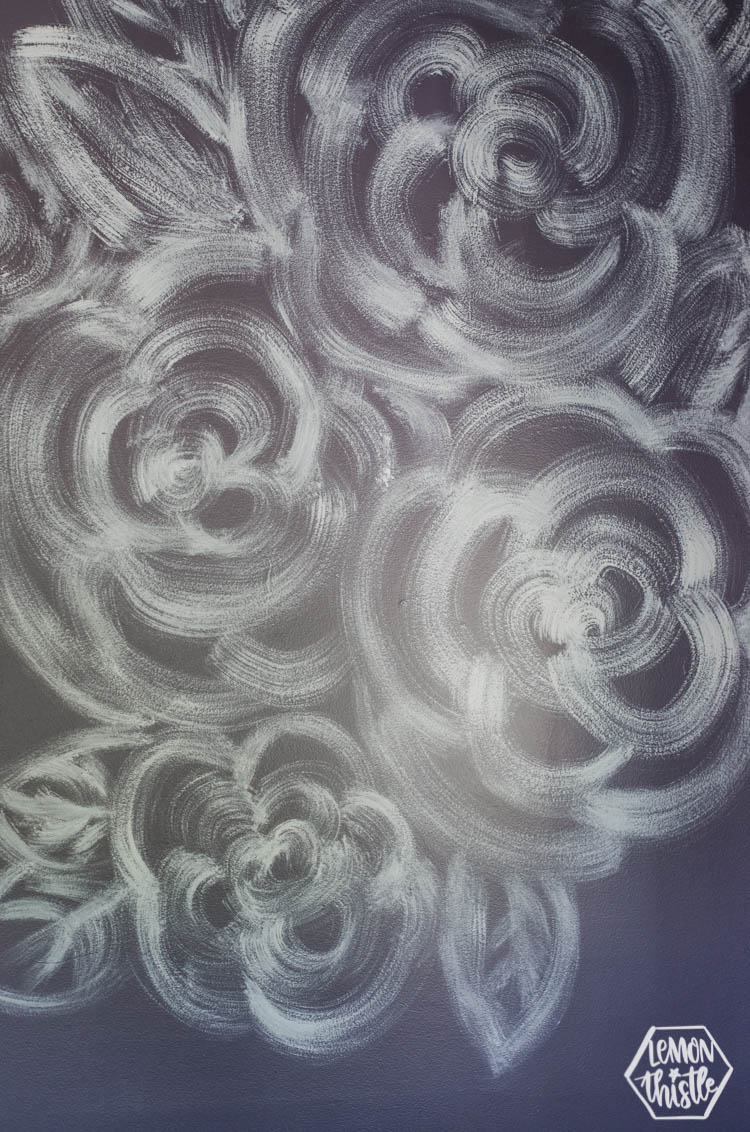 The florals turned out just how I’d imagined- brush stroke heavy and totally organic. I’m not going to lie- I was kind of nervous just free handing a mural like this on someone’s wall. In my own home, I don’t have much fear- it is paint after all! But I really wanted them to love it.  I had sketched it out before hand to show them, but wanted to try with the paint and the chip brush. I just used some cardboard to test out how much paint I was getting on the brush before I took it to the wall. I started with the three large flowers before adding in leaves and the smaller blooms. It came together SO quickly, you guys. I finished the mural, set the room back up and took photos before I finished my coffee. Which is crazy. If you don’t want to invest a TON of time and money into painting a mural… might I suggest this one? We used the white I’d chosen for trim (Arctic by Premier Paint), but if you were buying just for the mural, I’m pretty sure you could get away with a tester. It uses so little paint because of the brush-y look. And it’s that brush-y look that I love so much! It’s totally unique to other floral murals (not that I don’t love the really bright and bold ones too!). It reminds me of brush lettering– it’s so organic looking. 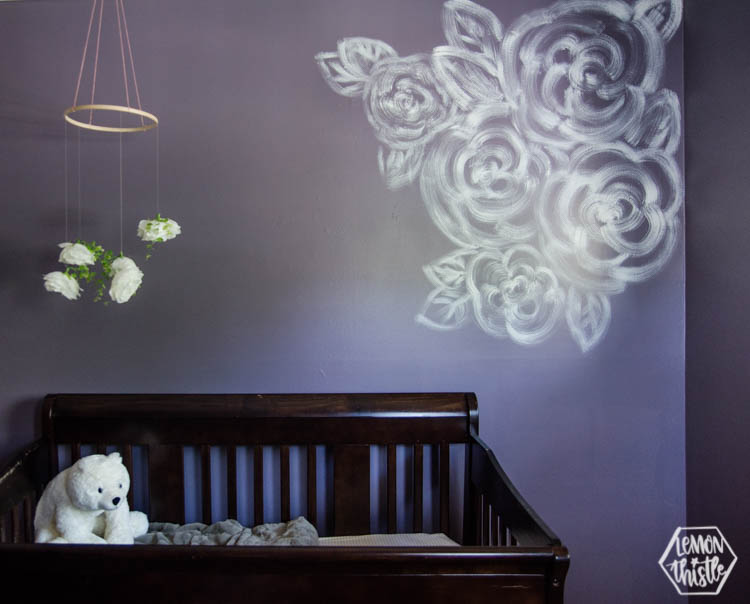 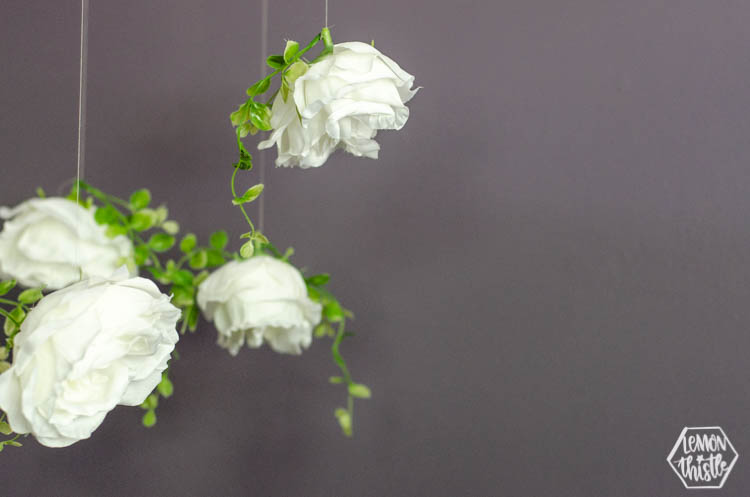 Other than the floral mural, I also made this sweet little mobile for the space. I made it while we had coffee that morning and totally didn’t take any pictures for ya. I used thread to tie fake flowers and leaves onto an embroidery hoop. I have enough blooms to make a second one so could definitely make a tutorial if that’s something you guys would be into- just comment below!

Thanks so much for partnering Canadian Tire!