If you’ve considered removing valences in your home but don’t know what you’re in for- I’m sharing some things we’ve learned about removing a few of them (in different aged houses) from how to remove them to how to repair afterwards! 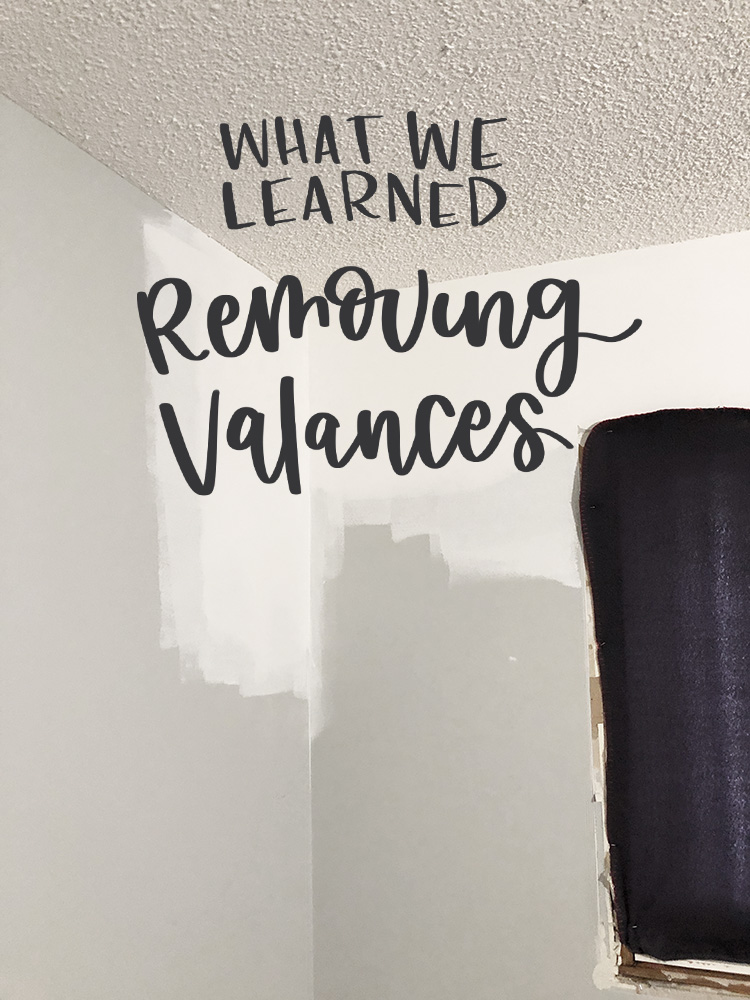 Earlier this week I shared on Instagram that we’ve made very little ‘pretty’ progress in the boys bedroom makeover but that doesn’t mean we’ve done nothing. We have replaced the flooring, put in new doors (a real closet door!), new trim, and removed a valance. And the amount of responses I got about the ‘removing a valance’ piece of that sentence was way more than I would have expected! Turns out a lot of you guys have them too. And want to remove them. But also want to know what you’re getting yourself into. So I thought I’d put all the conversations I’ve had over Instagram DMs into this weeks One Room Challenge update post in case you’re thinking of taking it on!

If you missed last weeks’ post, we’re joining in as guest participants to the One Room Challenge. The One Room Challenge is a 6 week makeover challenge to take any room and make it over top to bottom, sharing your progress along the way. We’re taking on the boys’ shared bedroom and it’s currently week 2/6! You can see our design plans for the space right here!

I feel a little foolish that I DIDN’T take any photos of this. We’ve removed 3 valances now both in this house and our last one and we’ve definitely learned some things from that process… BUT we managed to go through it without taking a single photo. Just before and after photos. Those alone remind me of why it’s so worthwhile, though. I will probably remove every valance in every home we ever buy now. But there’s definitely some things to keep in mind that could influence your decision and how you go about it! 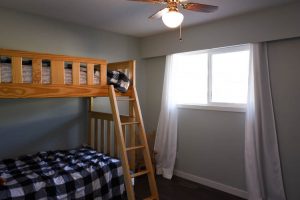 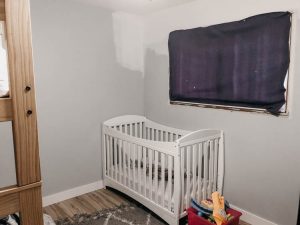 Here’s where we’re at right now. We have it all patched and the drywall patch is pried but need to paint… and replace that window. Getting all the big things out of the way! Alright… enough of the update, let’s talk about ripping those valances out!

PS. I’m sure you’ve gathered this, but we’re not pros… consider that your disclaimer ;)

When were your valances built?

Our first house was built in 1965. Shane’s dad was building houses around then and said that in that time period, valances were built IN to the house. When it was being framed, valances were framed in and they were finished like that. That means that there is no drywall underneath the valances so you need to do patching. This also means that any panelling was cut around the valances so we patched that as well (we loved the painted panelling in our last place!). 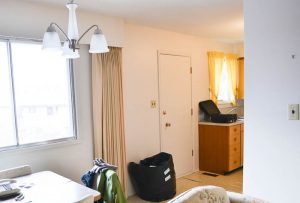 (see all of our old dining room right here)

Our current house was built in the 80’s. From what we’ve learned, it’s pretty standard that houses built in this time were built without valances and they were added in before paint/finishing as a decorative detail. That means that there is actual drywall behind the valances so removing them in this place was so much easier.

Depending on the age of your house and the builder, you could have either. If your house was built in the 60’s, it’s pretty safe to say you will need to patch drywall. If it’s built in the 80’s or later, you will probably get lucky and only have to fix texture of drywall. 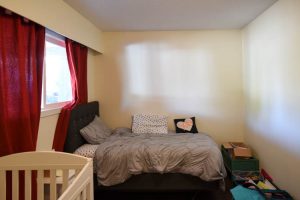 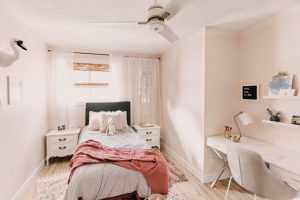 How do you remove a valance?

The actual removal of a valance is like any demo- but more careful since you don’t want to damage the surrounding drywall. Use a knife to cut the paint and drywall tape in the corners where the valance is attached to the walls and ceiling.

You’ll probably want to put down plastic to protect your furniture and floors since there’s no telling what will come down with this!

We then took a big hammer to it! Careful to only hit your valance, but the easiest way I’ve found doing this myself is to hit a hole big enough to get my hammer in and pull down. If you’re like me, that might take all your body weight but it feels so darn good when it you get it- ha! As soon as you get a hole in the valance front, you’ll be able to see if you will have to patch drywall or just texture. A giveaway is if blown in insulation from your attic starts falling on you- then you have a patch job to work on.

Once you loosen the framing of the valance, if you have a recip saw, you can cut it in the middle to make removal of the framing easier (less likely to damage the other walls). Honestly… I’ve never done that because once it starts moving it’s too exciting to get it out of there. But I have hit the other walls trying to get it out of there so think it would be a *wise* decision. Once you get it loosened like this, it’s really just pulling the framing down and clearing all the nails and blocking that were behind the valance. A large hammer and pry bar should be all you really need. 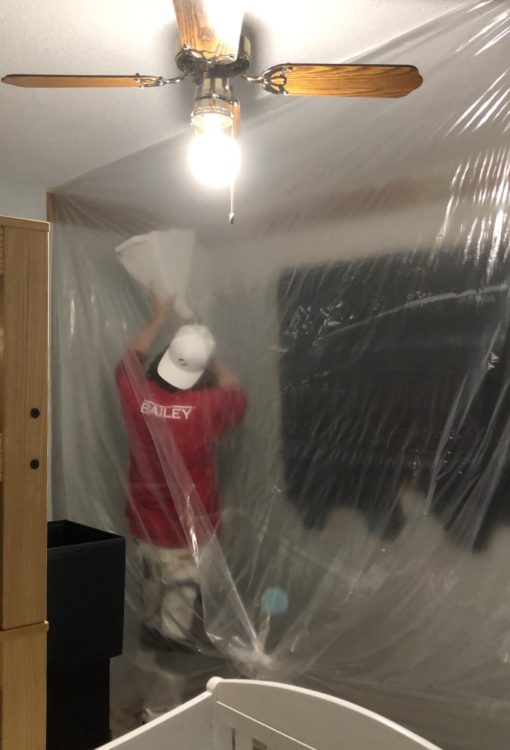 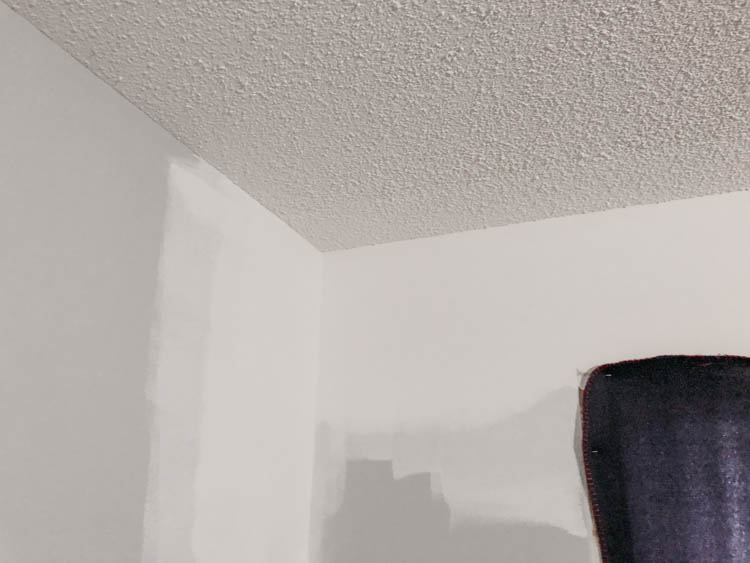 How to patch behind a valance

This is where you feel lucky if there was drywall behind your valance. Because if that is the case- all you need to do is patch up where the nail/screw holes did damage and patch your ceiling texture. We always choose to hire this step out. We will frame and board ourselves but drywall finishing (especially matching ceiling texture!) is a total art… that I don’t want to fail at. ;) A great drywall finisher will be able to match the texture in the ceiling pretty much seamlessly.

If you have a valance that is built in to the framing (not over the drywall) then you’ll need to patch the drywall. If your framing is complete, you can just cut your drywall to size and screw it in place before drywall finishing (mudding and taping). If you are wanting to try mudding and taping yourself, my friends Lindi and Russel from Love Create Celebrate have an Instagram stories highlight that gives lots of great tips! If your ceiling is flat without texture- rad! Do that there too. But if you have texture, I really, really recommend hiring a drywall finisher- they can work magic!

If you need to add some backing for your drywall patching (there’s nothing to screw your drywall to), you don’t need to worry about adding structural support- just adding something strong enough to screw the drywall into. You can take a piece of 2×4 and screw it into the existing framing- same as in the ceiling!

Alright… I’m going to leave it at that! I hope that if you’re considering taking down a valance that this gives you some kind of hint of what you’re in for!

Modern Patio Design Ideas
Next Post: How to Replace a Light with a Pot Light