I’m so happy with how my sister-in-law’s shower came together for this weekend! She is the best new mom ever- suggesting margaritas at a baby shower? How cool is that!? We may have taken her suggestion and ran with it. Remember our inspiration? It came to life in all the best ways. 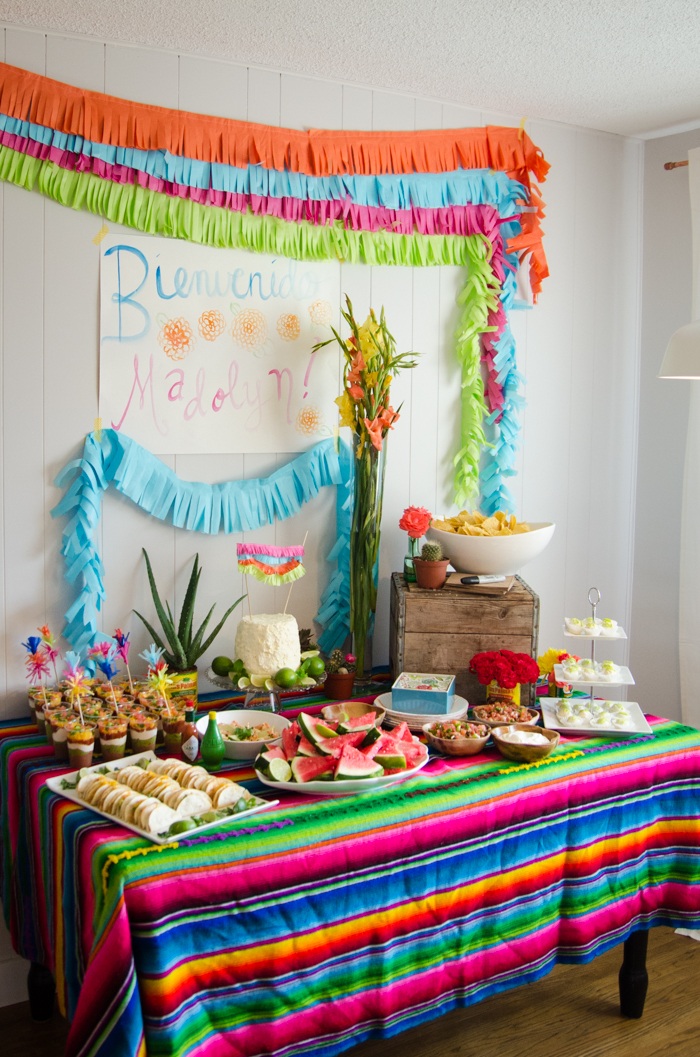 We harnessed the fiesta and brought out the cacti, enchilada sauce tins, colourful blankets and even the tequila. Is that taboo at a baby shower? It was tasteful, I promise. There are so many details for this shower I’d love to share and I’ve put a lot of thought into the best way to share them… and came up empty. So we’re going to just follow along with the pictures… shall we? 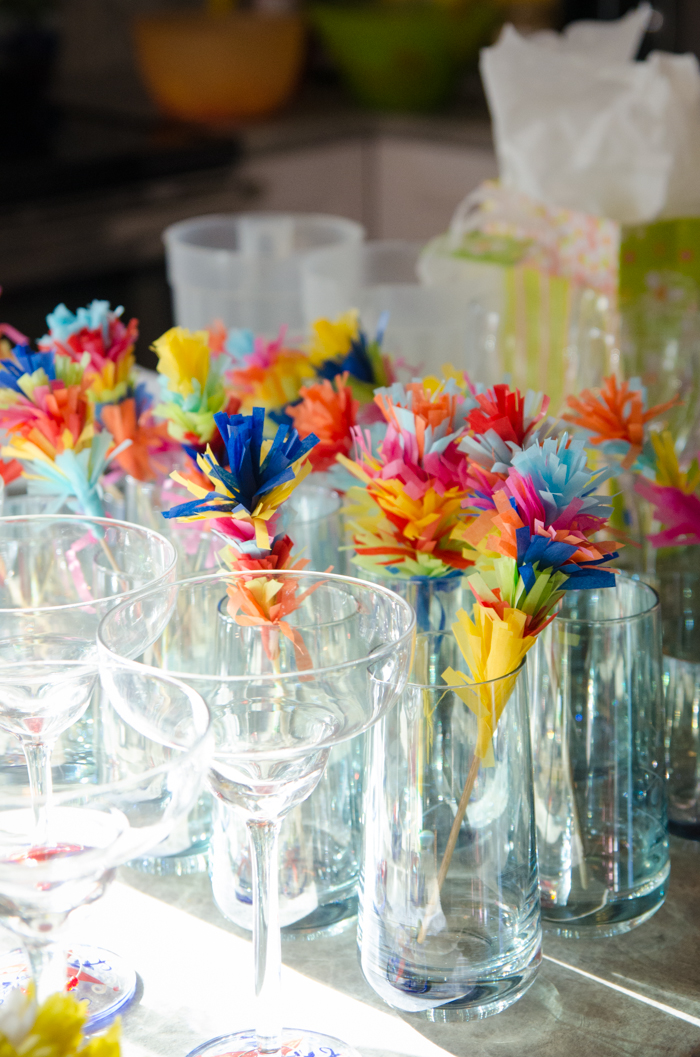 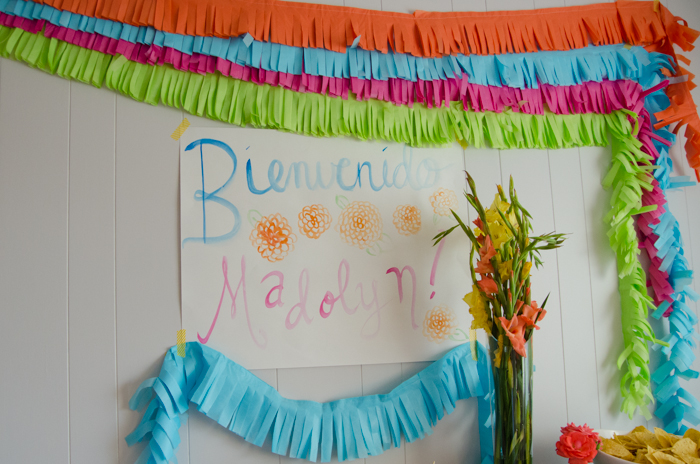 We got hooked on fringe after seeing Lou Lou the Baker‘s fringe cupcake toppers. We made our own as drink stirrers and carried the fringe through the garland and cake topper! We followed how to make the drink stirrers, and I’ve got a tutorial for the garlands coming up. I also tested out my watercolour skills to make these signs- there was one by the drinks as well. I’m pretty impressed for my first time really using watercolours! 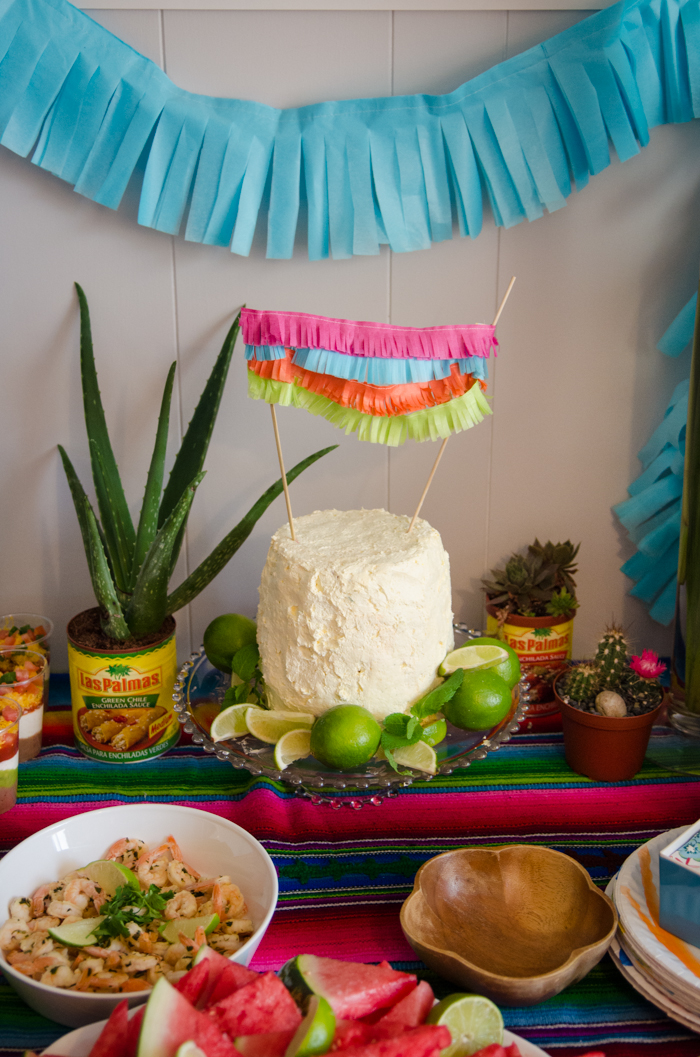 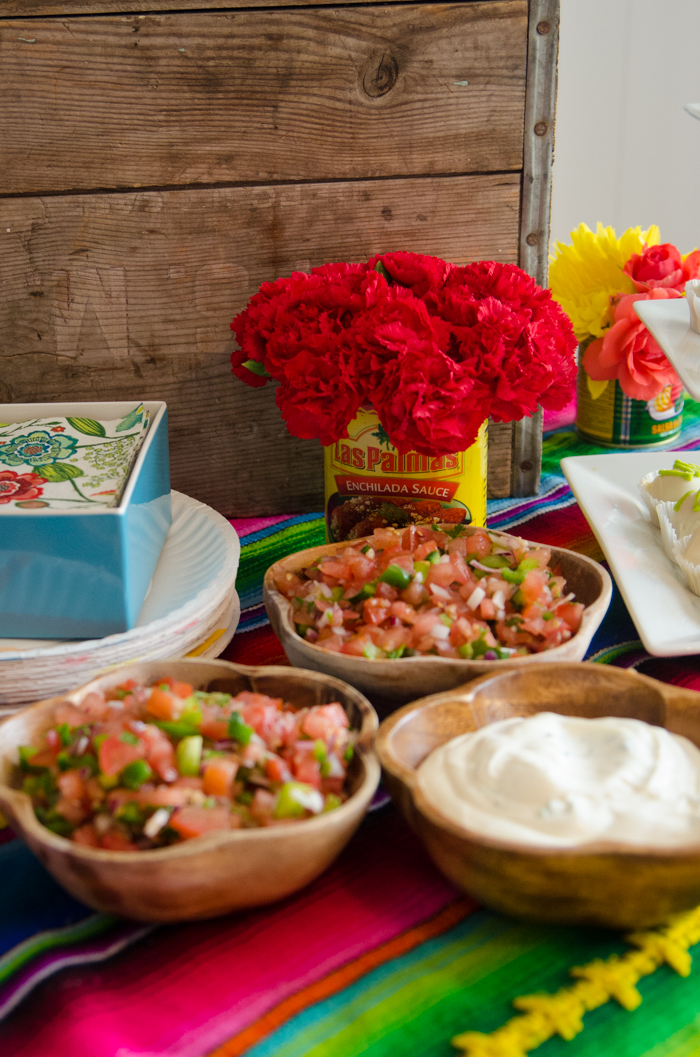 As always- I love fresh flowers. We used flowers from our local grocery store- the tall guys are glads and often go on sale 2 bunches of 5 stems for $5. The red ones are carnations, the white and yellow are mums, and the pink are roses from my dad’s garden. I love the enchilada sauce tins we used as vases! So festive. I also spent some time tracking down cacti (apparently they’re all the rage in town- everywhere was sold out and I wasn’t about to pay $7 for an itty bitty cactus at the specialty plant store). So I pulled mine off my window sil, found one at a grocery store, then turned my attention to succulents to fill the gap. Luckily those weren’t as in demand! 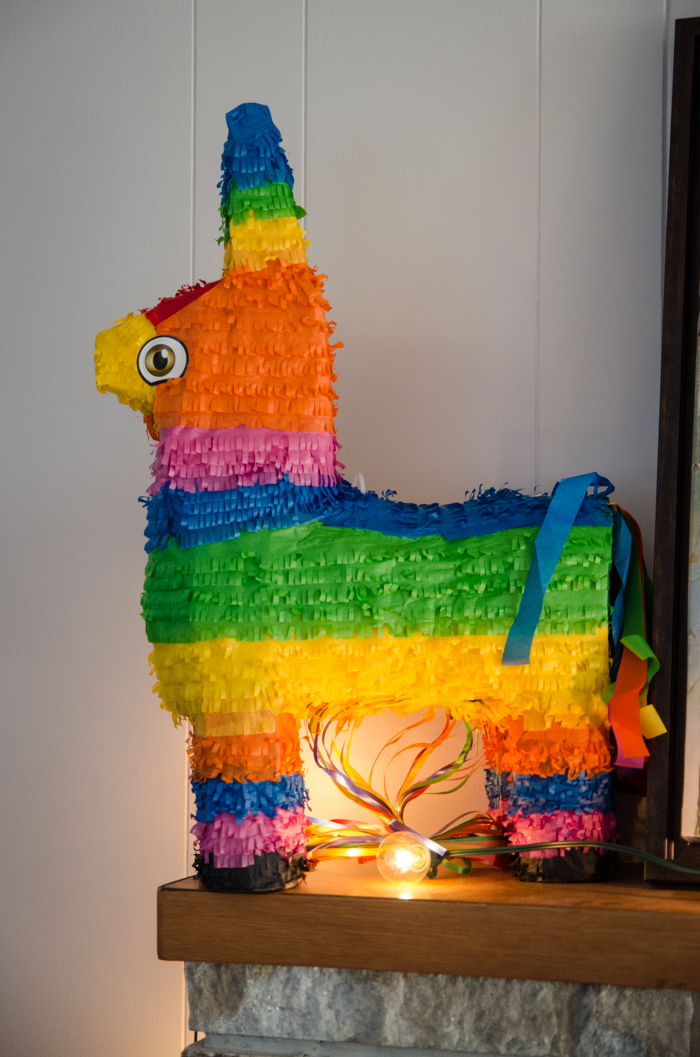 One of the guests (my sister-in-law’s sister… say that 3 times fast) brought a pinata! We displayed it on the mantel with some patio lights until the festivities. It really dressed up the living room, along with some more mexican woven blankets. 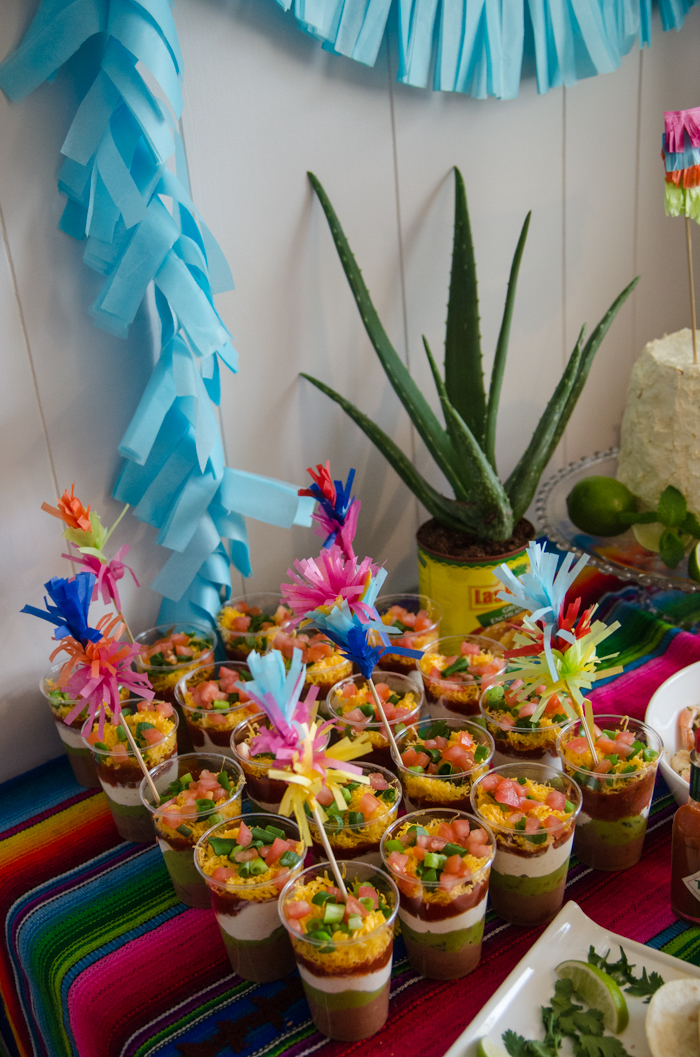 Gah, I don’t know if I’ve ever been in love with all the food from a party as much as this. Like, it was all insanely good. There were no flops. When does that ever happen?

We made 7 layer dip cups like The Girl Who Ate Everything– the only issue with these was we used too tall of cups and it was hard to get the bottom layer out with a chip. Doh- there was even cute short and wide glasses at the dollar store, but we had these ones at home so thought ‘make do’ but we should have splurged and spent the dollar. Lessons learned. We cheated at filling them to (or should I say, we won) and used ziploc bags with the corner cut off to ‘pipe’ the layers in. Scooping was just too messy. 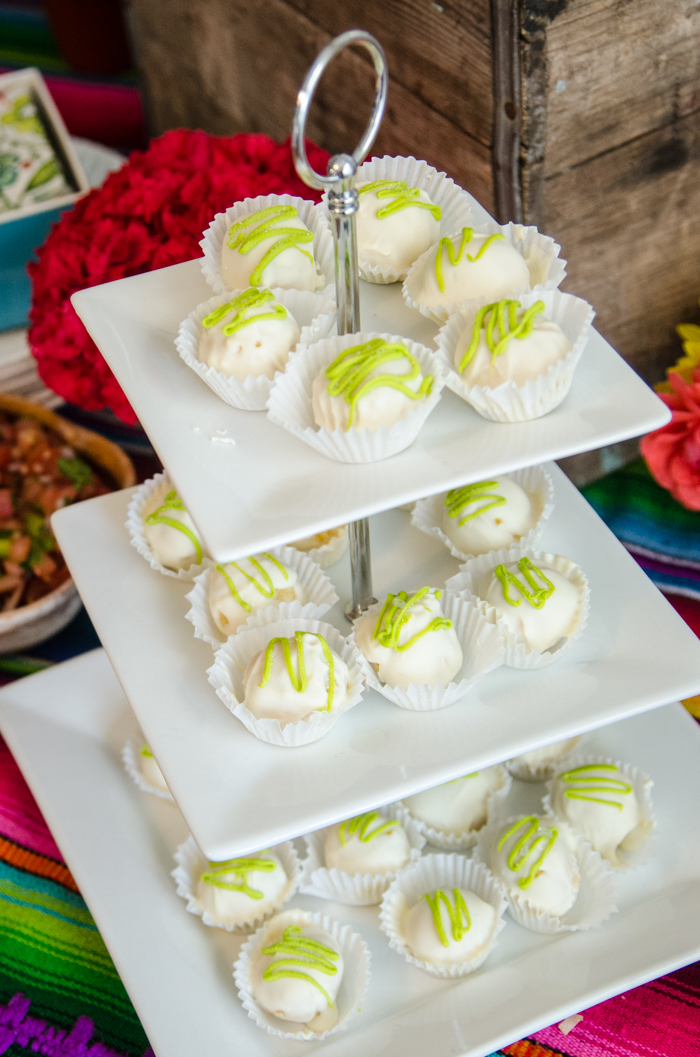 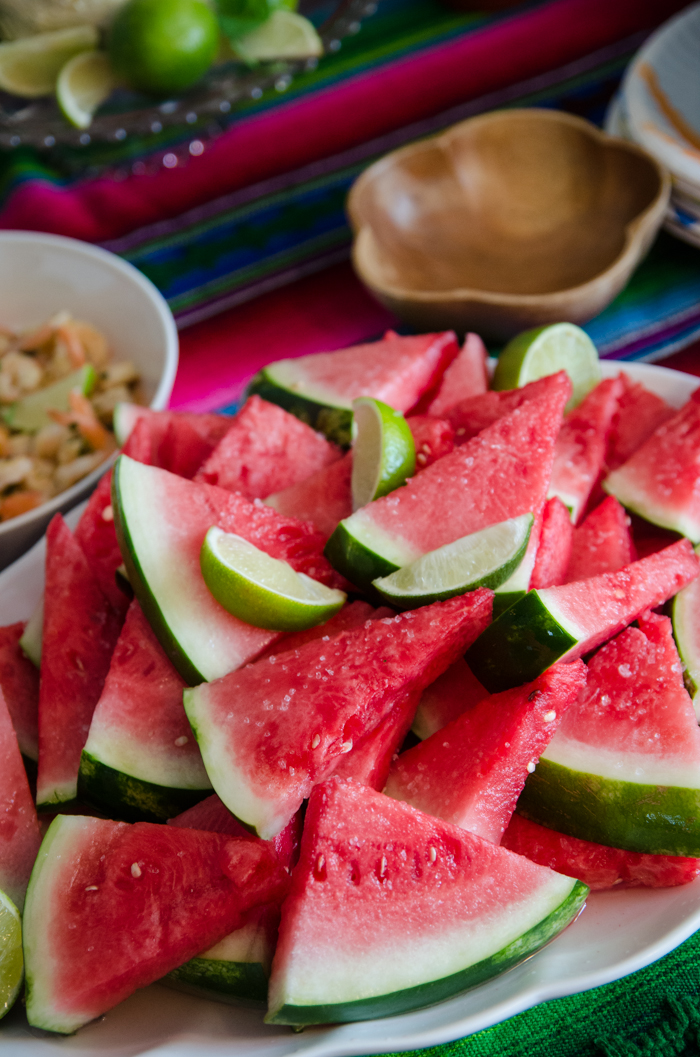 My sister-in-law (the gorgeous blonde up there!) made those margarita cake balls from Butterlust as promised and they were as good as the pictures looked! SO good. I had to walk away from the food table so I wouldn’t eat them all. She chose white chocolate to dip them in instead of green candy coating, and just drizzled with the green candy melts. We also made Martha’s tequila watermelon– and salt with watermelon was such an unexpected and refreshing combo! This got rave reviews. 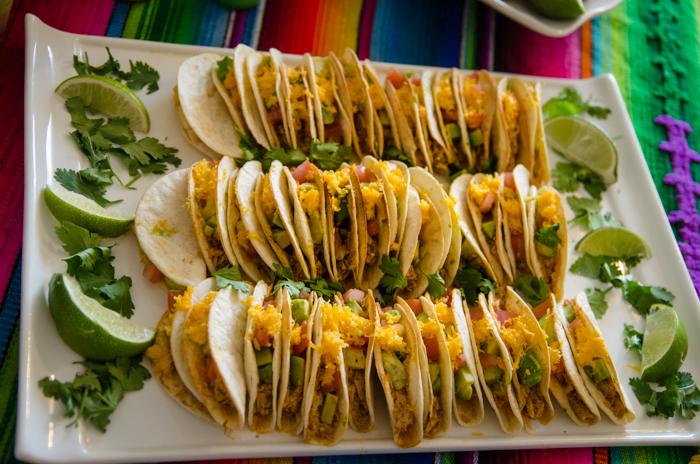 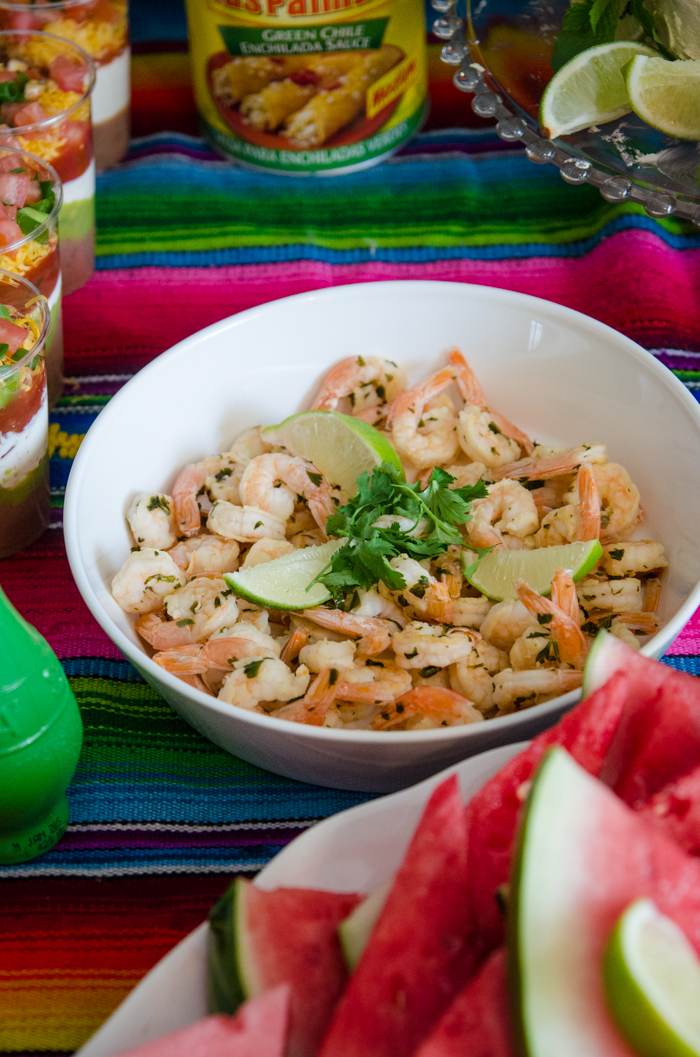 The mini tacos were also SO cute- and they disappeared faster than anything else on the table. We were of course inspired by SMP Living and used their genius way to make mini taco shells… but made our own filling. I’m going to be sharing that recipe later because I’ve made it a couple times this week for salad topping because it’s incredibly yummy for how easy it is. The shrimp are these tequila lime marinated shrimp (there’s no alcohol left in them after you fry them, I promise we were not all sloshed- I don’t think one person got there). 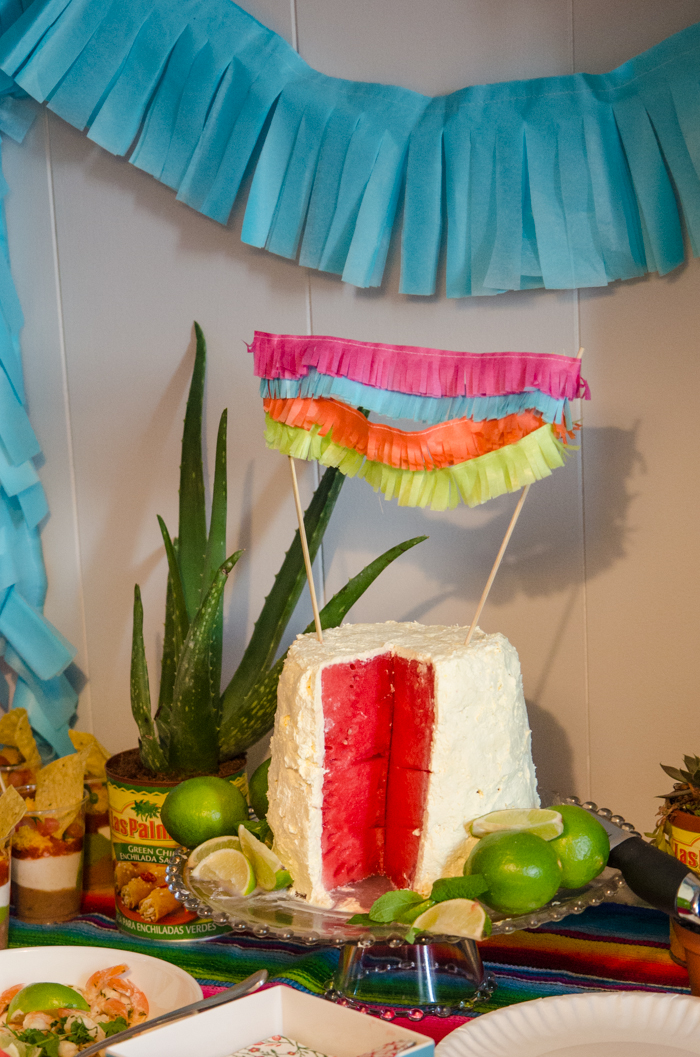 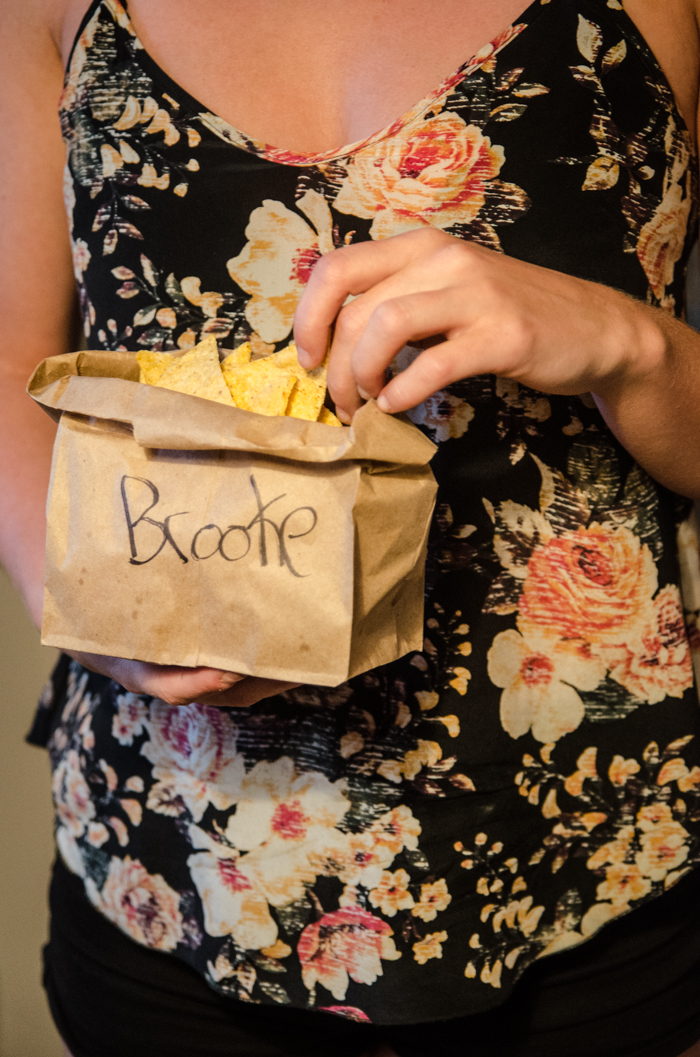 We also had a chips and salsa/guac bar (one of the guests brought the best pico I’ve ever tasted) and we used these cute little bags to load up our chips. Last but not least is that ‘cake’ it’s actually a watermelon cake (which I’m sure you’ve seen similar ones floating around Pinterest), but the magic is in the ‘icing’ I’m going to be sharing my recipe next week and you probably don’t want to miss it. I brought the extras to our church BBQ the next day and I’ve never explained how to make something so many times as this guy. 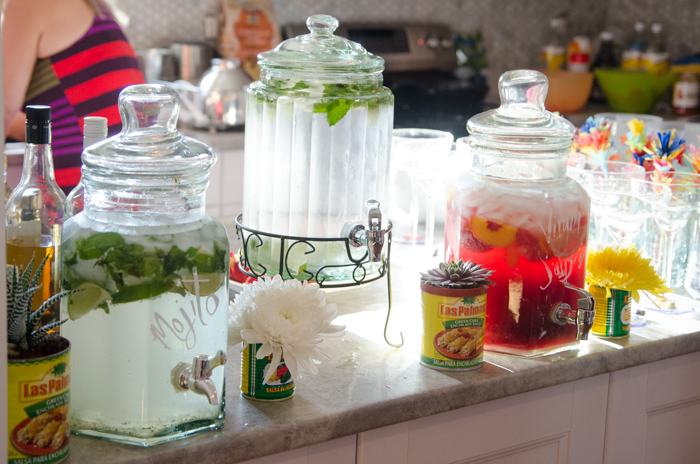 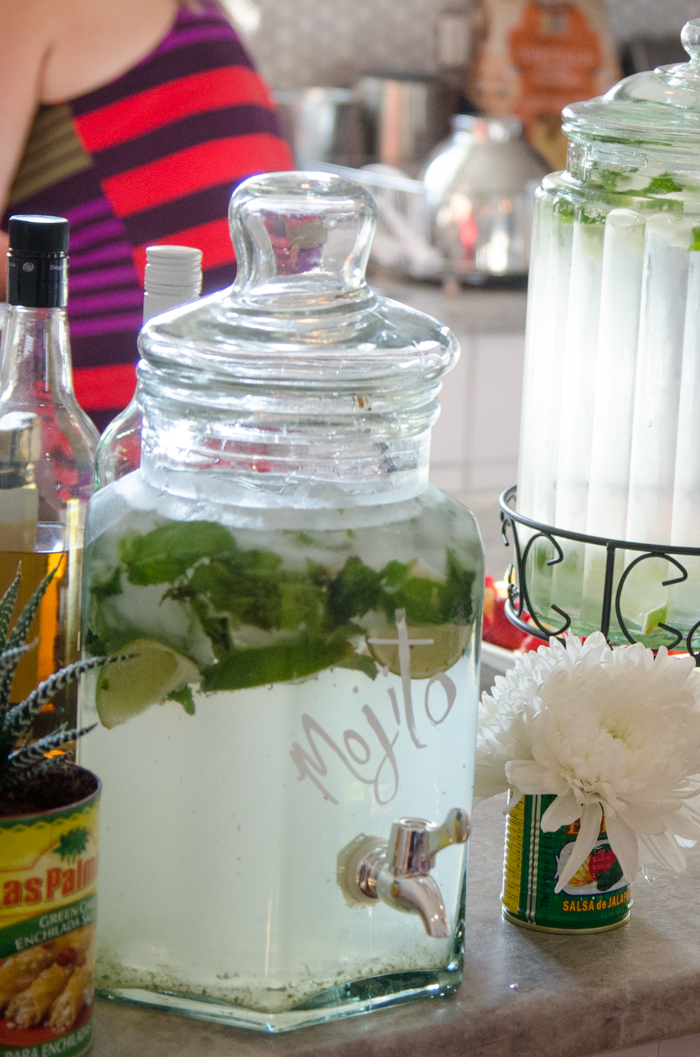 Oh! Drinks… we had Virgin sangria, mint and lime water, and Mojitos – all marked with white window markers. We also blended Margaritas as they were ordered and the lime recipe we got from my aunt was a-mazing! I’ll definitely be keeping it for the future. 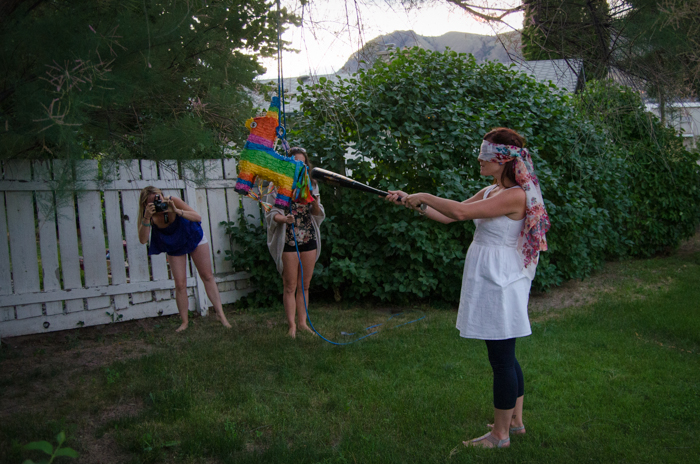 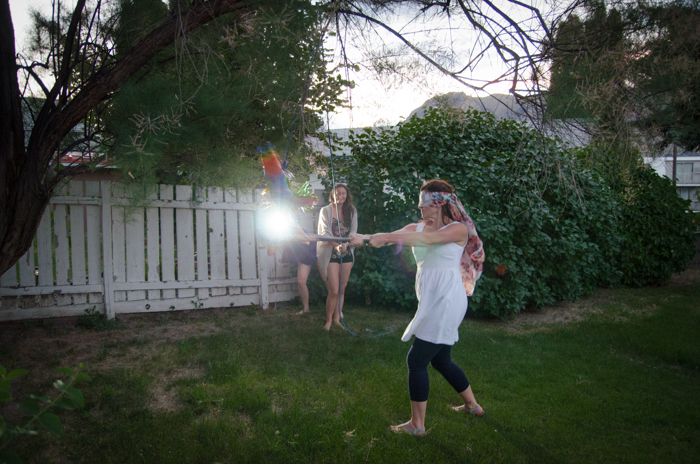 Okay guys, last category. This was a baby shower after all, so we of course had to have some games! Other than the Pinata (which was a blast, of course!) we played two other little games. Games are usually ice breakers- but we didn’t really need an ice breaker with this group. We’ve been around eachother for enough celebrations over the past few years, it was so nice to welcome back friends of family, family friends (there is a difference y’know), and extended family. But they were all good sports about the games anyways. Just a side note- look at the new Mama’s swing… she killed the pinata first try, so we strung back up a half beaten pinata for the rest of us to take a crack at. 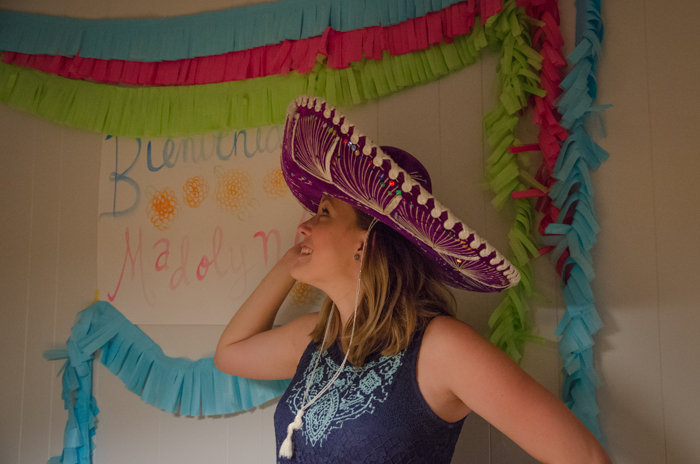 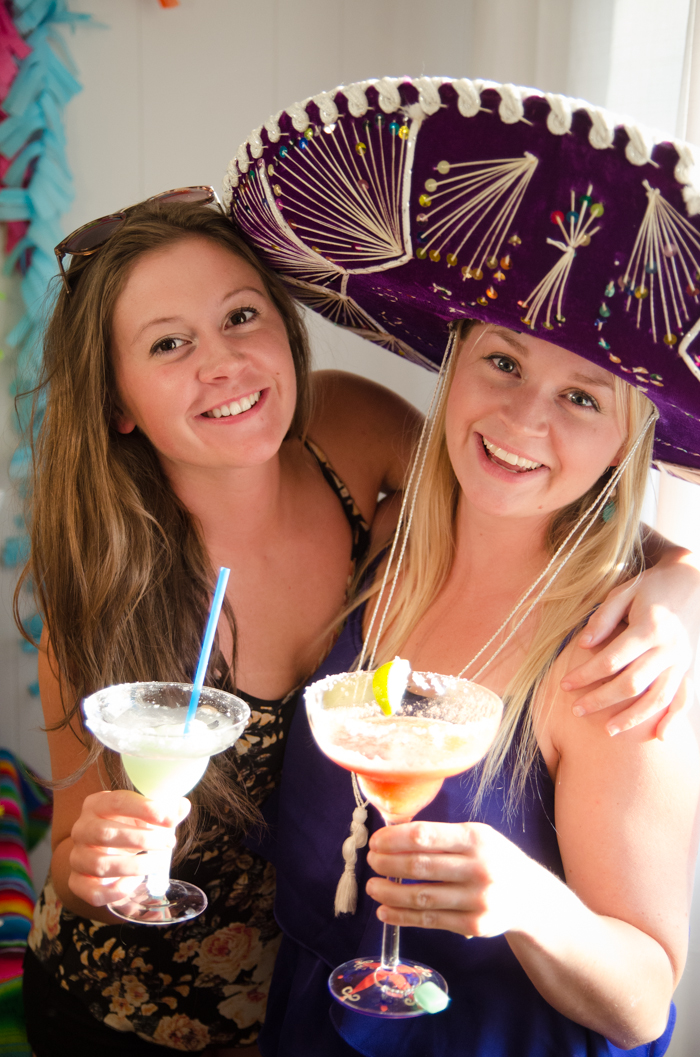 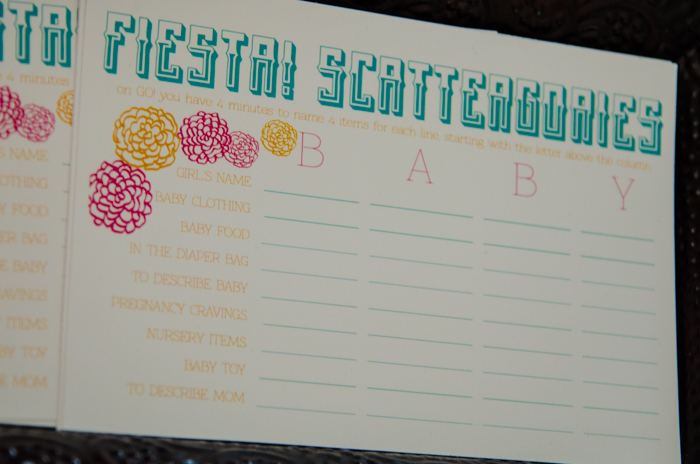 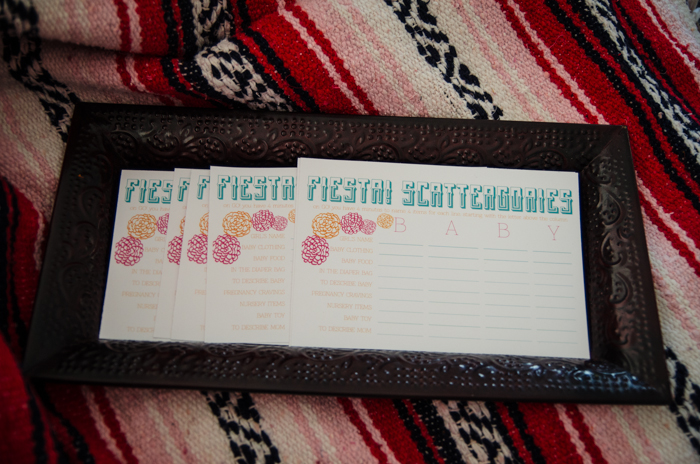 We also put a twist on the age old ‘don’t say baby’ game. Any time a guest was caught saying ‘baby’ they would get the sombrero to wear until the next time someone slipped up and said the ‘b’ word. The third game we played was a baby Scattergories. This would have been our ‘ice breaker’ but we played it well into the night- it was a good way to break up the eating (maybe that was just me) and give away some of those plants as prizes. We had some good laughs at the answers too… To Describe the New Mama? Bootylicious. It can’t get better than that. I’ll be sharing this free printable soon! 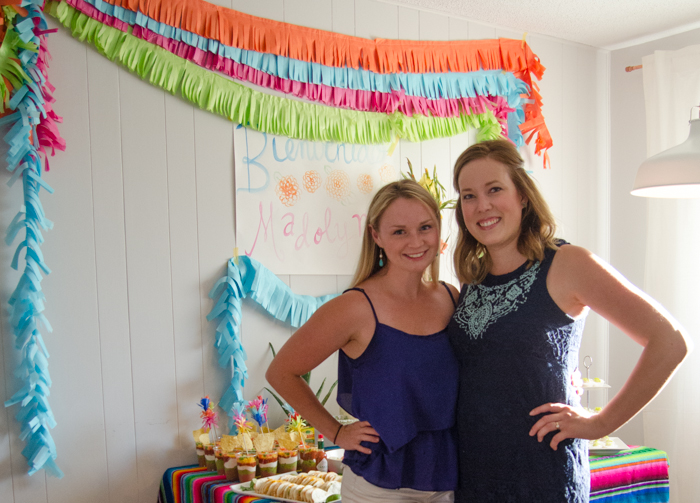 So that was (in a million pictures or more) our Fiesta baby shower! We had such a great time celebrating the new Mama and passing around baby M. And this girl up there? She’s the bomb- the best to throw a party with, we get things done. Do you have anyone like that in your life? You just get things done together?

I’d love to hear what you think! Would you have a fiesta baby shower? Maybe as a bridal shower instead? We’re going to use up some of the margarita supplies for the Bachelorette finale in a couple of weeks… even the family that hasn’t been watching is excited.