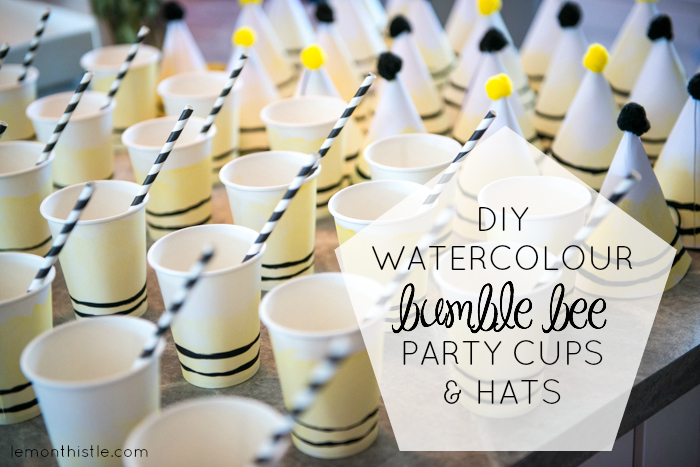 This is the last post from my kids’ First Beeday Party! I have mixed feelings: enough already! and a bit sad that they’re really one and I have to stop talking about it now. And to be honest, I probably could have included the instructions for these hats and cups in the party post because they’re so easy. But that post was already suuuper long and I wanted to drag out my kids ‘turning one’ for a little bit longer. #honestymoment So we’ll add this to the Felt Backdrop DIY/Printable Invite and the Bumble Bee Marshmallow Pops then we’ll let it be. 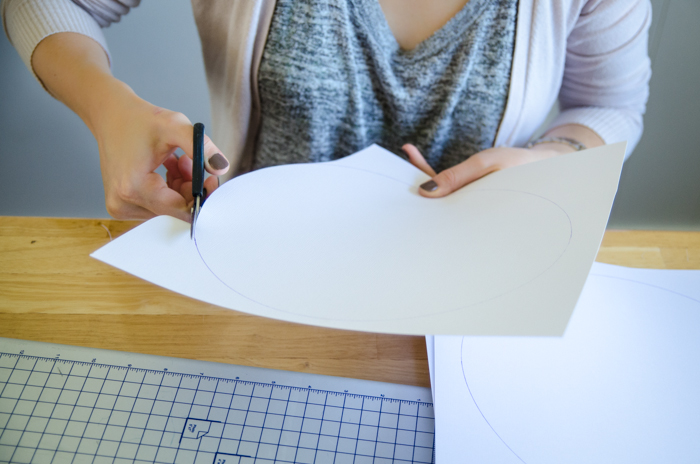 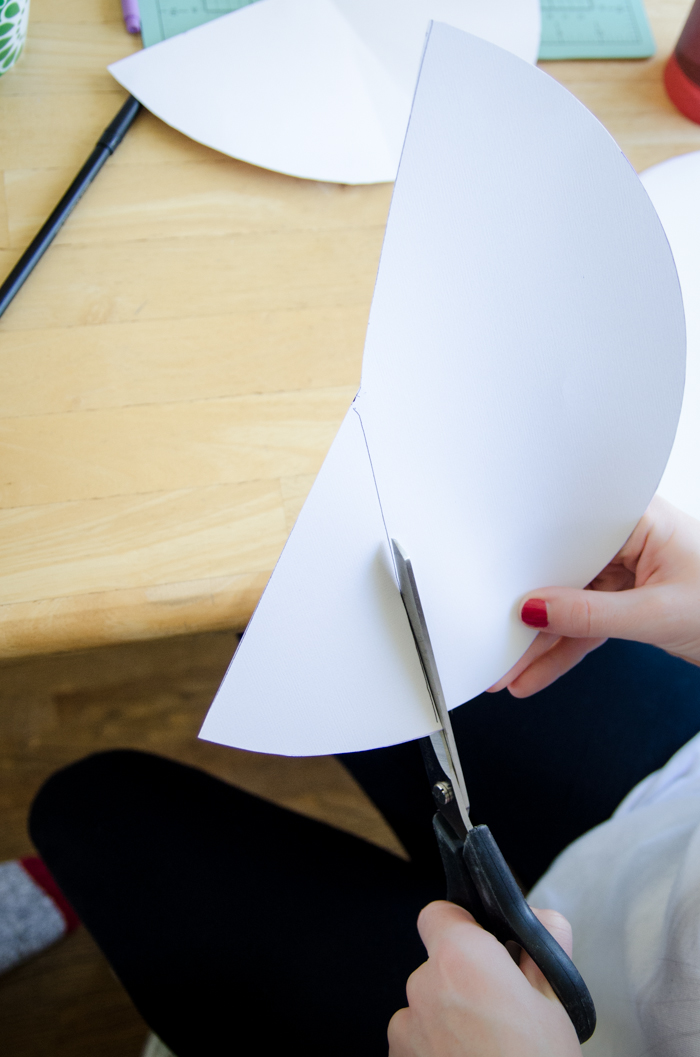 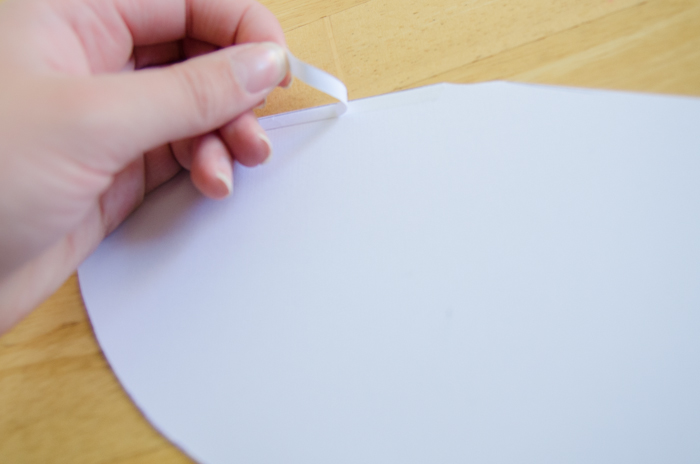 To get started, you’ll need to get plain white paper party cups, and white card stock (12×12 size). I started by tracing circles as large as I could fit on the sheets of paper and cutting those out. From each circle, you should be able to fit two party hats (and have a little triangle left over). Once your hats are cut, notch out a bit at the point of the hat, this will make it easier to assemble. I then took a piece of double sided tape and assembled the paper into cones. 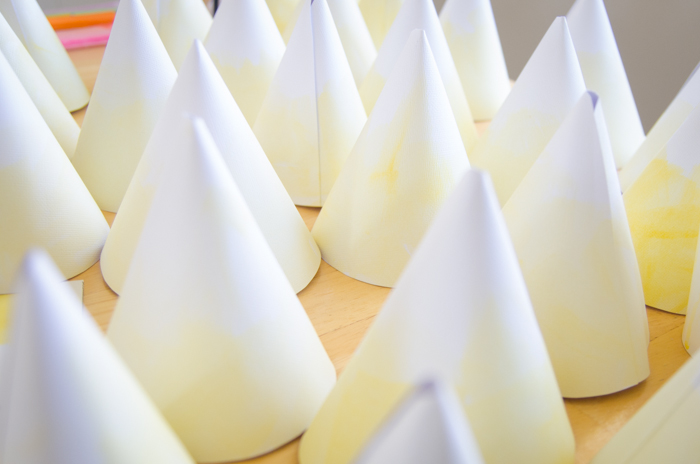 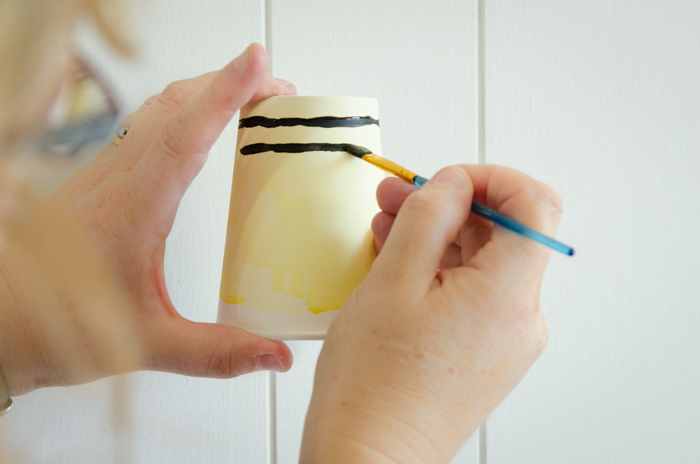 You might remember my posting Watercolour Party Cups before… and they worked so well that I used the same technique for these guys. So hop over there if you’d like more details, but essentially I watered down acrylic paint and had fun creating an ombre look using random brushstrokes. I did this on both the hats and the cups before letting them dry. Next, they were ready for their bumble bee stripes! I grabbed a smaller brush and painted two stripes around the bottoms of the cups and hats. I considered varying the number of stripes, but decided against it… two looked by far the best! I love the natural look of the lines, they’re not taped off-perfectly straight. 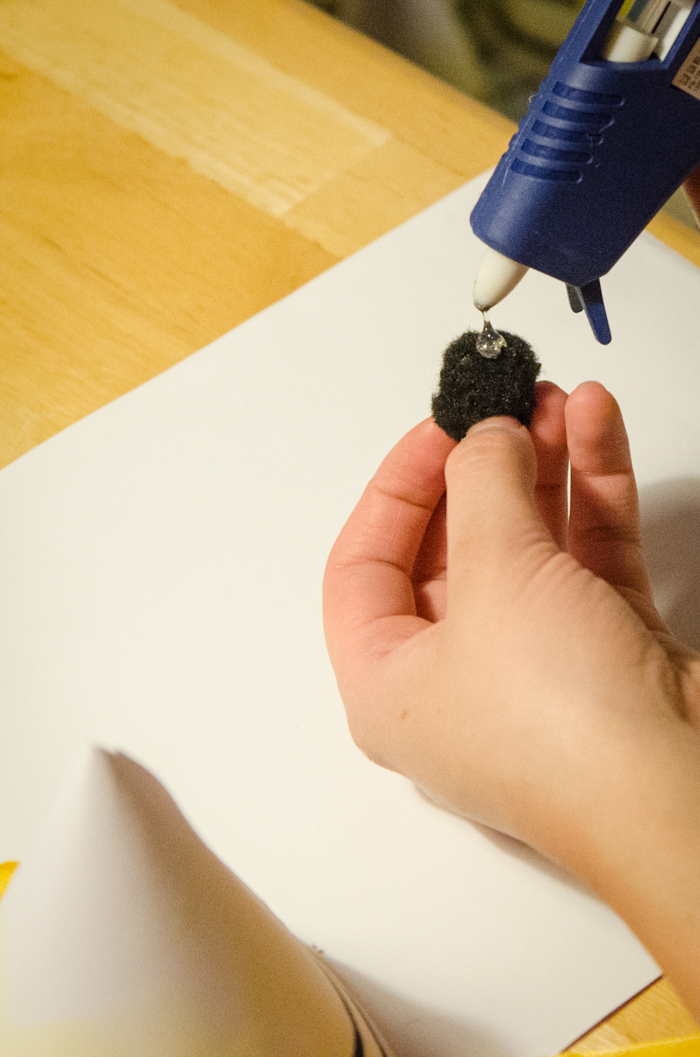 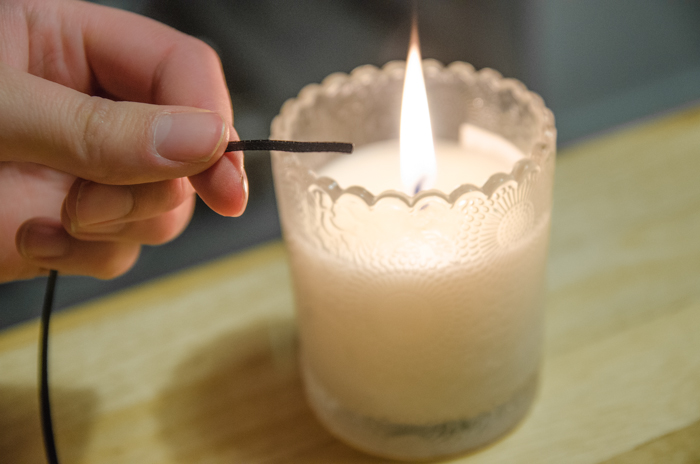 When the stripes were dry, the cups were done. To finish the hats off, I hot glued a pom pom on, as well as some ribbons to tie the hats on. To keep the ribbon edges from fraying, hold the ribbon close to a candle flame (but not in the flame) to melt the fibers just slightly. I’m pretty sure this is self explanatory, but I put the picture in there because this is how close/ far away it needs to be. If you hold it too close it will melt unevenly or too much and then you’ll feel a crispy end on your ribbon. Then, use a glue gun to attach those ribbons on. I was lazy at first and attached them with washi tape… this doesn’t work. You’re just setting yourself up for a very disappointed four year old who asks you to bobby pin the hat to their head. I fixed some for our family photos and glued the ribbons on properly… then they worked perfectly. Lesson learned. 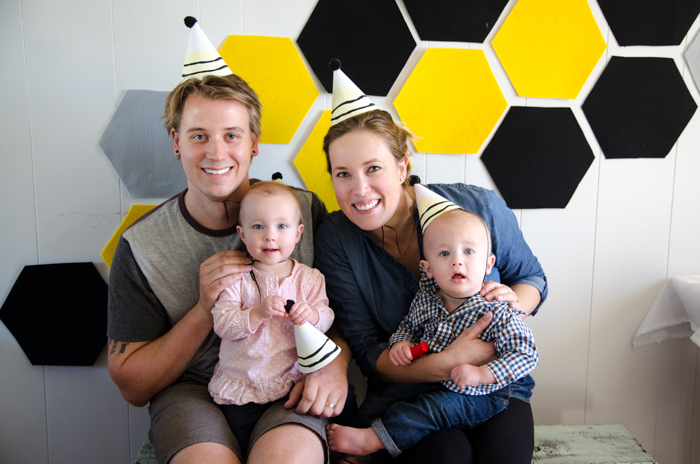 So that’s it, guys! Now you can go and make your own bumble bee themed party hats and cups and really anything else that you can put a paintbrush to. And I promise you to move on to some new party themes and leave the bees alone for a while. What do you think of painting plain party supplies? Would you do it or do you prefer to have them ready-made to fit your theme?

PS. You may have noticed four different sets of hands showing you how to make this craft. I have the best friends in the world, don’t I? So thank you to everyone who helped me craft for this bumble bee party- you guys rock :)