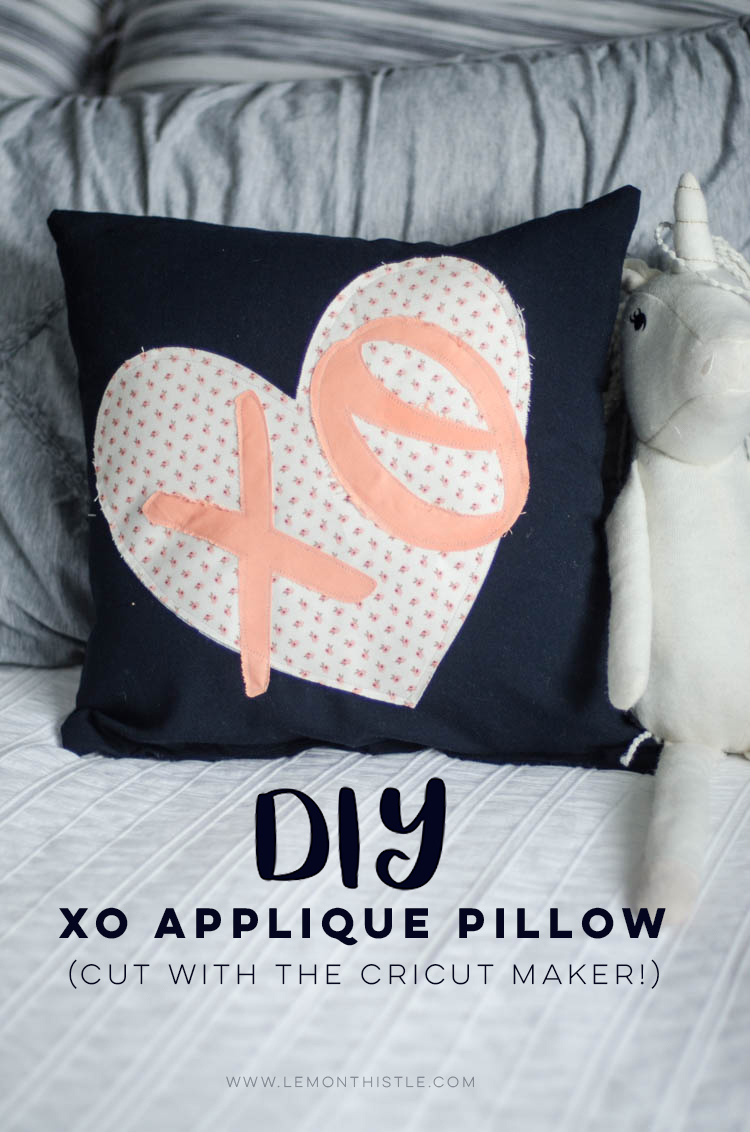 A couple months ago I got to fly to Salt Lake City and attend Cricut’s Mountain Make-a-Thon which was also the launch of their new Cricut Maker. I’ve had my Maker for a while now and am completely loving it but the one BIG thing that it is supposed to do ridiculously well… I hadn’t even touched! And that’s FABRIC. I’m just not much of a sewer and have been putting off pulling out my sewing machine. But the time has come and I’m excited to tell you that YES it is as good as they say it is. And I’m even more excited to partner with Cricut to share this DIY applique pillow tutorial and the free handlettered XO template with you all!

So I’ve had this idea for a pillow in my head for a while- hand lettered applique on a pillow. BUT when it came time to actually do it, I totally chickened out on doing a full phrase. Because I’m just not a confident seamstress and didn’t want to be sewing the applique on for days. So I’m starting simple and I feel like this went really well so I just might try something a bit more intricate net time! But there’s definitely a few things I learned along the way that will make next time better. Ready for the tips and the template? 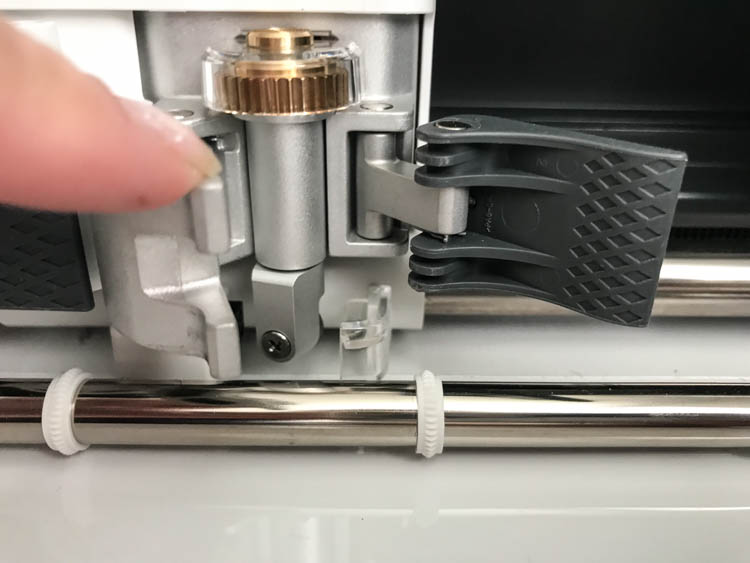 If you’re wondering about WHY the Maker can cut fabric and other machines can’t (I would never have known if someone didn’t show me…). In a nutshell… if you know nothing about cutting machines… The biggest difference is that the Maker has a rotary blade (whaaa) that you can switch in for your standard blade. It’s like hand cutting fabric or felt or leather or whatever with a craft/xacto knife (which I’ve totally done #theworst) vs a fabric rotary cutter. There’s no comparison-  it cuts fabric like a boss. It’s kind of amazing.

Alright… so I decided to use up this unbleachable pillow case I’d sewn for this crafternoon a couple years ago. The dark navy worked so well with the pretty peachy colours of this Cricut Apricot and Persimmon Designer Fabric sampler pack. Aubrey was pretty smitten with the pink flowers so she claimed it as her own before I even cut the XO. I had to explain to her that XOs meant hugs and kisses before she let me add the XO on to the pillowcase. She had just wanted that flowery heart, but eventually agreed that she gives me lots of hugs and kisses so the XO was good. Negotiating with a four year old is tough business. 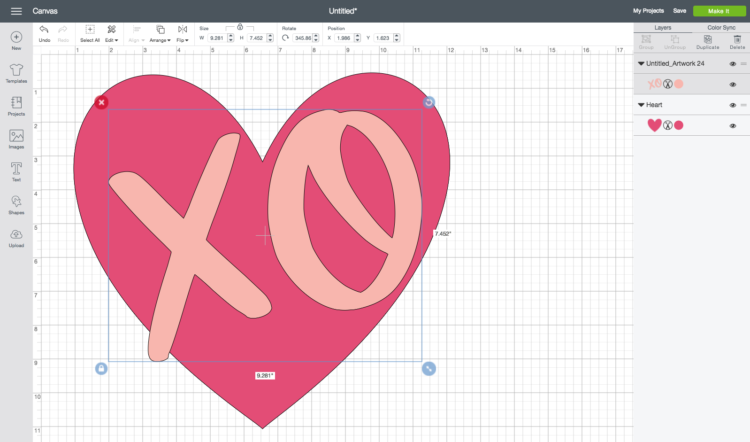 The first thing you’ll need to do is load your design into Design Space. You can grab the XO I lettered RIGHT HERE. This is for personal use only (as are all my freebies). To upload your own design to Cricut Design Space, you need to hit ‘upload’, and save it as a ‘simple’ file and ‘cut only’ design. This design is ready to go. Size it to the size of your pillow case and hit insert. I added the heart that is a standard shape in Design Space. You can then color these designs two different colours and when you hit ‘go’ it will automatically separate them onto the two mats. 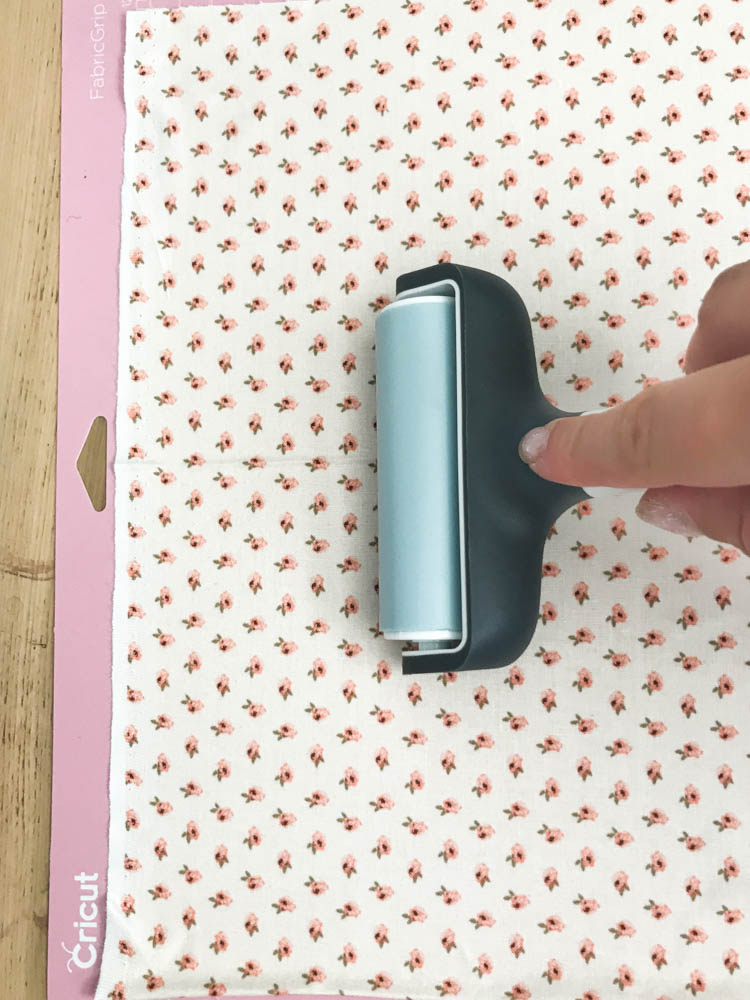 There is actually a new fabric specific mat for the Maker and a brayer you can get to go with it. I had never heard of a brayer before the Make-a-Thon but was told by some quilters that it’s totally a thing and I MUST get one. Who was I to tell them no? And honestly… it is amazing. It’s like a roller/applicator that smooths out all the wrinkles when you’re putting the fabric onto the mat. It’s like the scraper is to vinyl but for fabric. 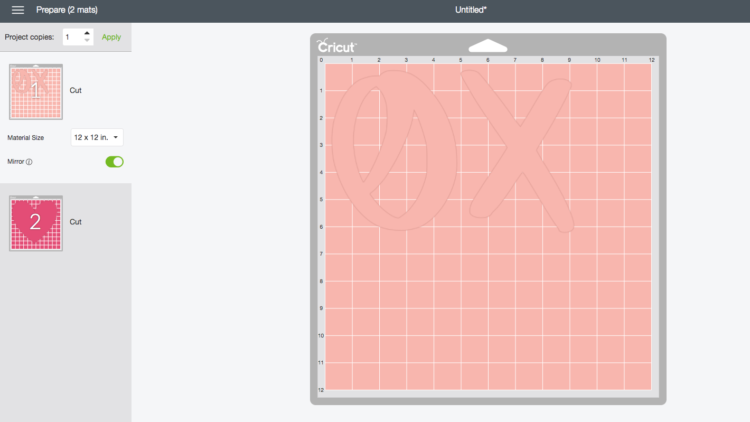 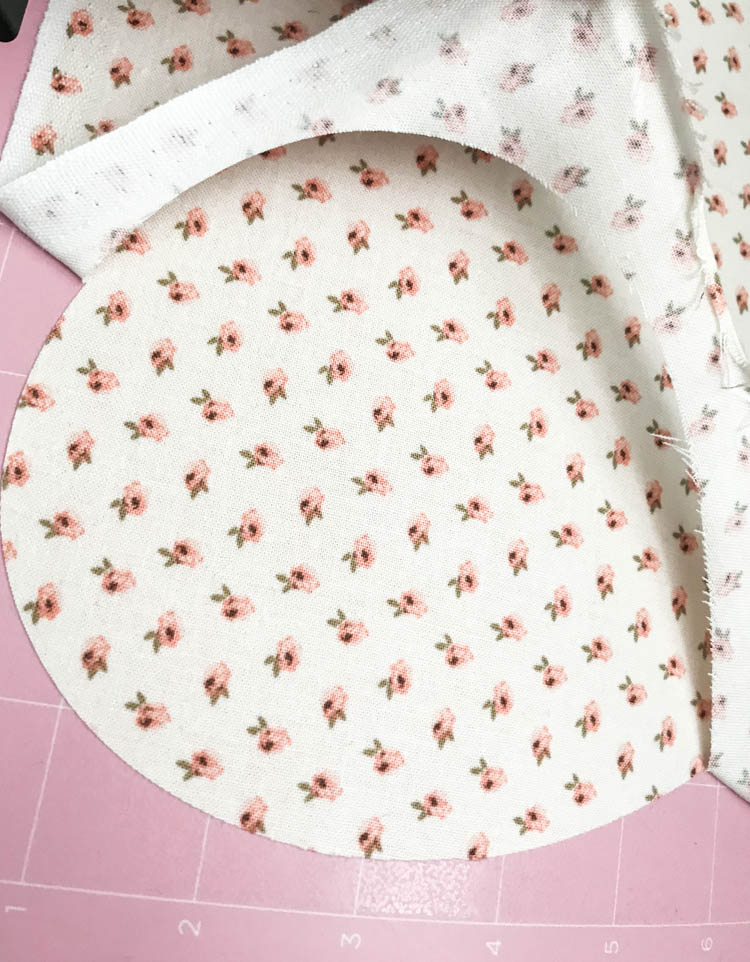 Before you hit GO… make sure to switch in your rotary blade (shown waaay above) and choose the right fabric setting for your material. Then watch it do it’s magic! Cutting fabric is deceiving because you can’t actually see where the cuts are until you start peeling back the excess fabric. Until then… you kind of wonder if it worked! But see how clean that cut is? Brilliant! I’m officially never cutting tedious fabric pieces by hand again. I’m looking at you plushies.

Swap out your fabric and hit go for your next cut (the XO). 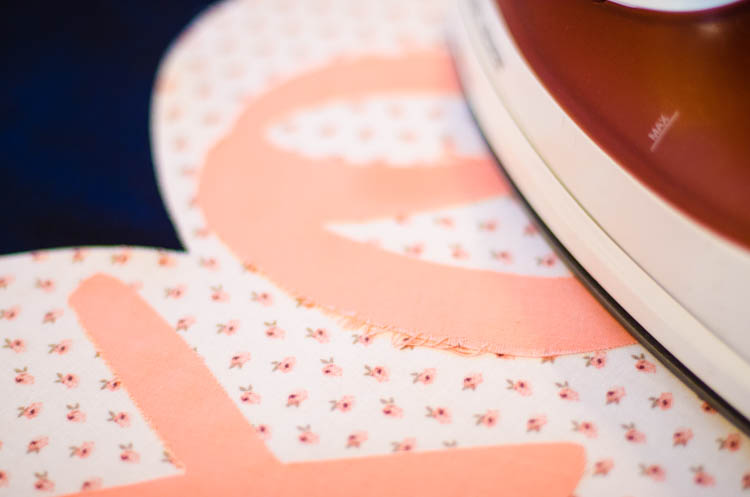 Let’s talk INTERFACING. Now, as a non-sewer… this was something I knew was out there but didn’t totally understand until I used it. And I actually didn’t use the right stuff BUT after asking lots of questions, can recommend to you exactly what you should be using for something like this. Interfacing is basically fabric stabilizer that sticks to other fabrics… to make everything easier to sew together without slipping around and dealing with pins. Which is really one of the worst parts of sewing (PIIIIINS). I did the heart with a cut/ fuse interfacing. Which is totally fine, but you need to be careful that none hangs over the edge (oops). I did the XO with a fusible spray which was AMAZING. But the one I used was actually meant for foils to fabric instead of fabric to fabric so it wouldn’t have lasted a wash without sewing. This stuff however is NO SEW so if you wanted to do an applique without sewing, its’ the stuff to use. Next time, I plan to spray the fabric BEFORE cutting it on the Maker. I think that will make pulling it off the mat without getting frayed edges easier. Ps. Fusible means iron-on (shown). 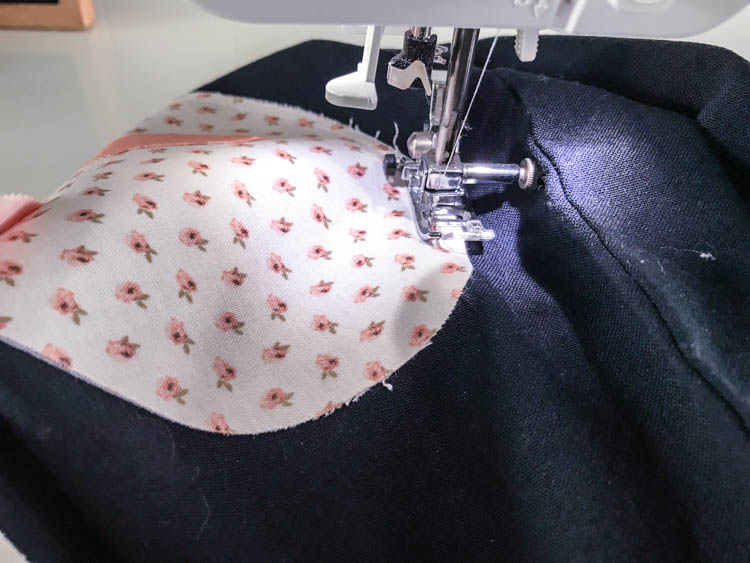 Then… you can stitch around all the edges! If you look closely, you can definitely tell that I’m not the best at keeping my margin (is that the right word?) between the edge of the fabric and the stitch. And corners are a bit wonky. BUT it’s pretty darn good for my first applique and I’ve gotta say that I’m proud of it. And Aubrey thinks it’s amazing, so that helps. She’s also four…

I started to ‘fray’ the edges of the XO fabric using my fingernail and really love how that edge is looking (the close up at the top of this post). But think it might be easier just to toss it in the wash to let it fray naturally. I’m going to try that instead. 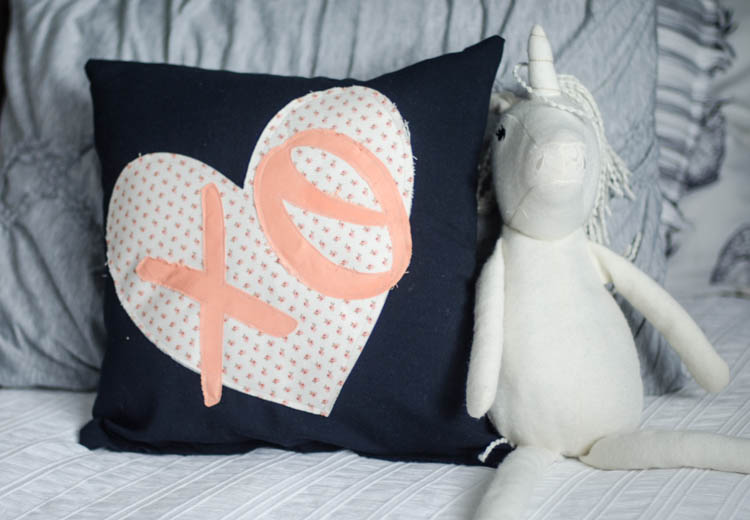 So that’s it! What do you think… would you try doing a fabric applique like this? Now that I’ve done one… I’m definitely less intimidated at the thought of doing another. And now that I know there is such a thing as no-sew fusible spray… I might try a no sew one and see how it holds up. I do love this alternative to vinyl for decorating a pillow. It just seems so much cozier to snuggle in a bed. I’m already thinking of how cute this would be on pyjamas too.

And if you are interested in hearing more about the differences between the Maker and other cutting machines, I do have a post planned where I’m doing the same project on BOTH my Maker and my Explore Air just to show what they’re capable of.