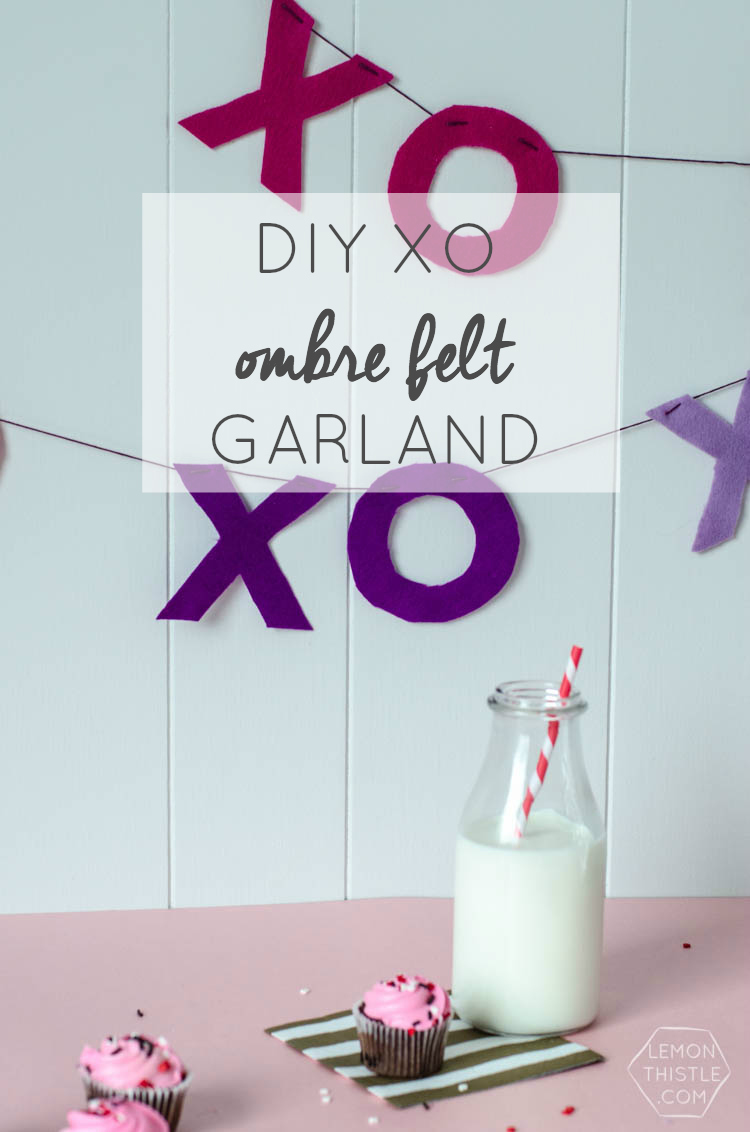 January is almost over! You know what that means, right? Valentines Day decor is taking over! I promise that I’ll keep a balance for you- deal? In fact, I can tell you for certain that my next two posts have absolutely nothing to do with Valentines Day, okay? But you know I’m excited! This XO garland is the perfect way to kick off the pink and red madness! It has ombre appeal (which I’m still not over) and uses one of my favourite materials- felt. How could it not be awesome? Plus, I got to get mini cupcakes for the pictures so I’m a very happy girl with this one (even considering the little tummy ache from eating too many). 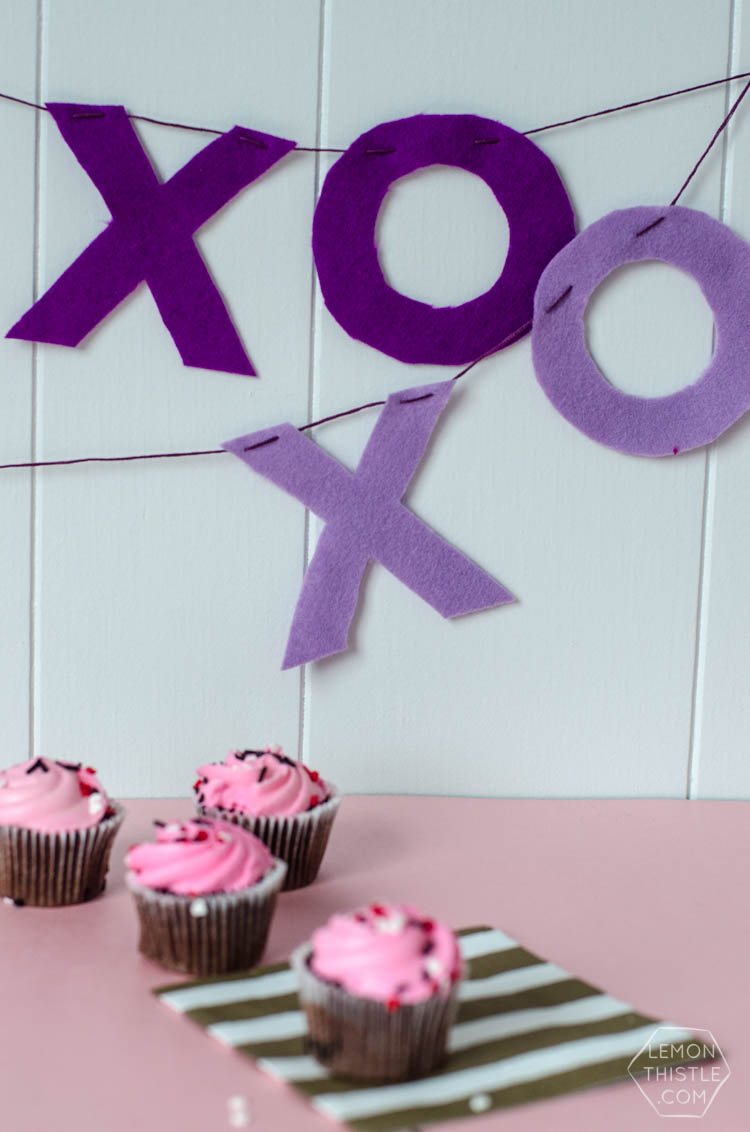 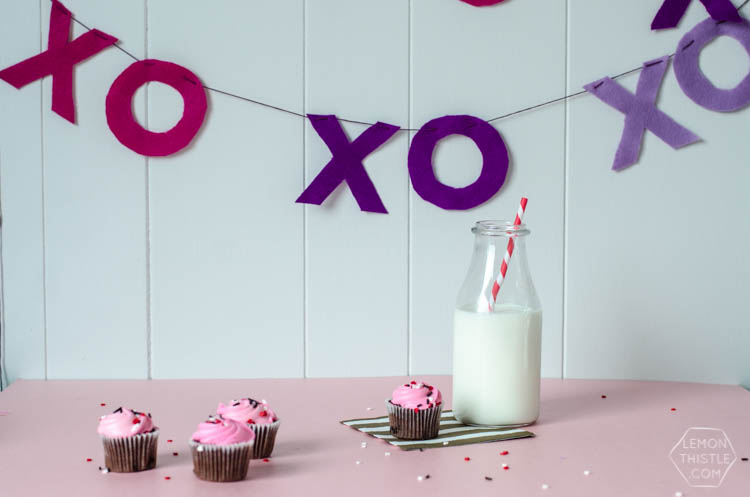 It’s a quick and simple DIY- I made this to test out a technique because I’m planning another felt garland for something coming up… but it turned out too well not to share it with you. So I’m breaking my ‘no Valentines until February’ rule- and I’m actually happy about it! Here’s what you’ll need to make your own. 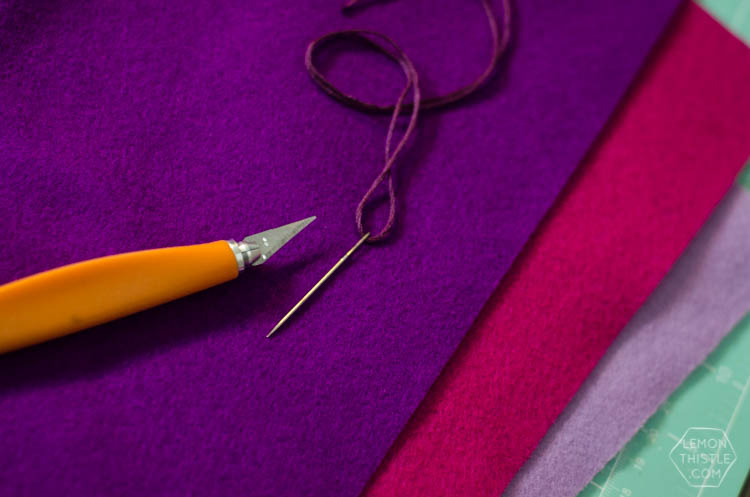 Okay so, my note on the *sharp* craft knife. I’ve cut felt before (like a bazillion masks) and eventually threw out my old craft knife because it made me want to cry every time I tried to cut felt. Like I said, this is actually a ‘test’ for a different project and the reason is because I didn’t know if I could bring myself to cut SO much felt again. So I marched up to Walmart and purchased a better craft knife. This one to be exact

. And I’m now giddy that I can cut through felt lickety split. This project will make you want to pull your hair out if you don’t have a sharp knife. Just saying, you’re now warned. 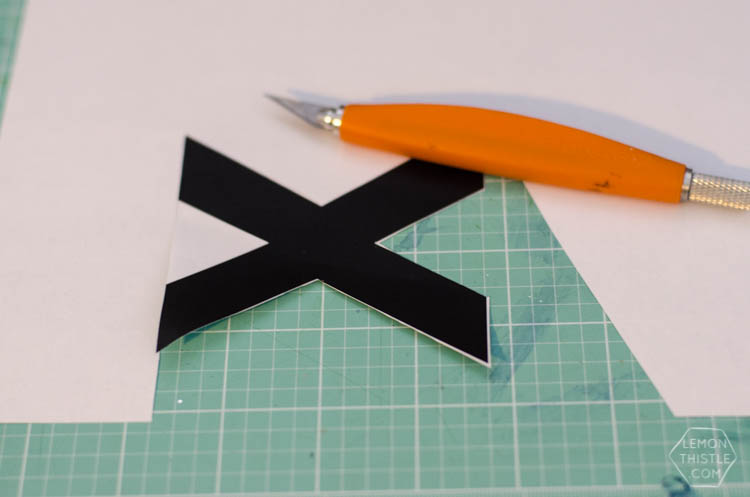 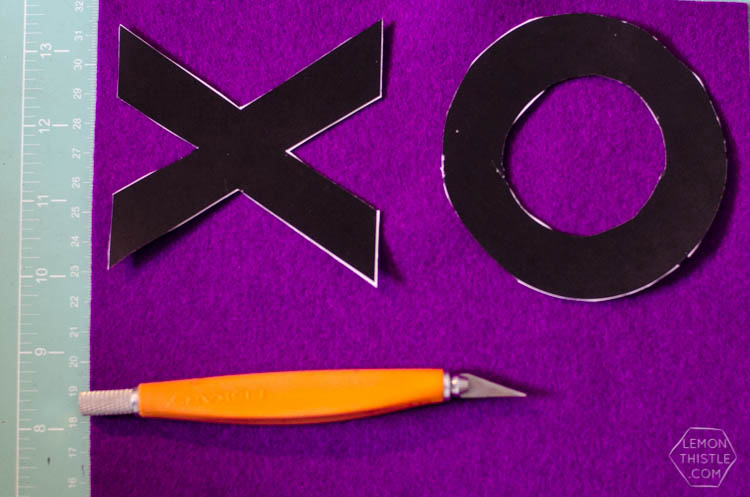 Okay so now that I’ve ranted sufficiently, let’s get to the how-to. Print out your template and cut it out. When you’ve got that all ready, you can position it on your first felt sheet. If you were a very patient crafter (not like me) you could trace your template before cutting. I just cut around the template, holding it firmly in place. Instead of dragging the tip of the knife through the felt (which causes felt fuzzies), try to have as much of the knife blade contacting as you press it through. This will give the cleanest and easiest cut with felt. 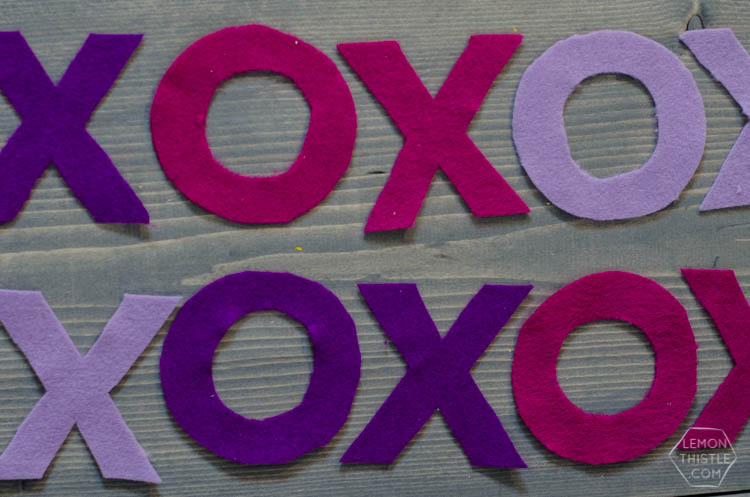 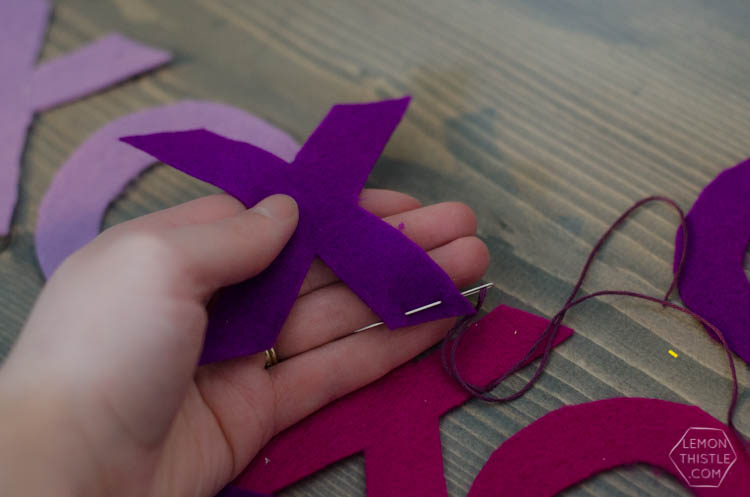 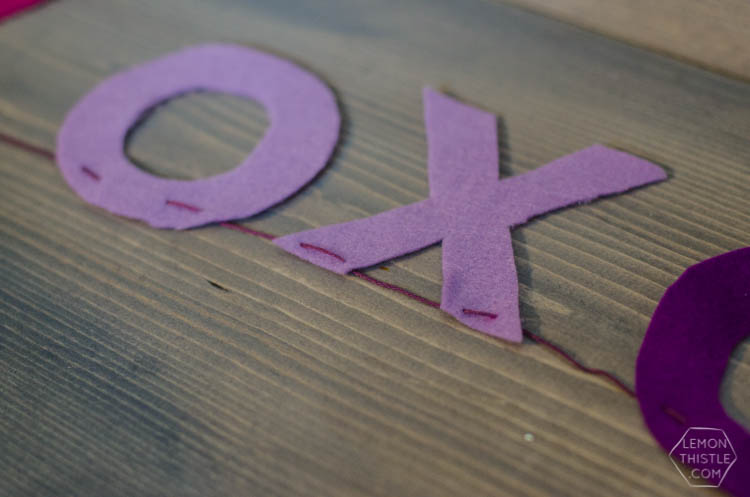 When you’ve cut out as many Xs and Os as you would like, you can thread your embroidery needle. Thread the Xs and Os on to the embroidery thread as pictured, from back to front, front to back on each part of the letter. The thread is thick enough that the letters stay in place once positioned. If yours were going to be around kiddos and getting played with a lot, you could tie knots in between the letters to make sure they stay in place. Mine are on the wall out of reach of little hands so I didn’t bother with that. 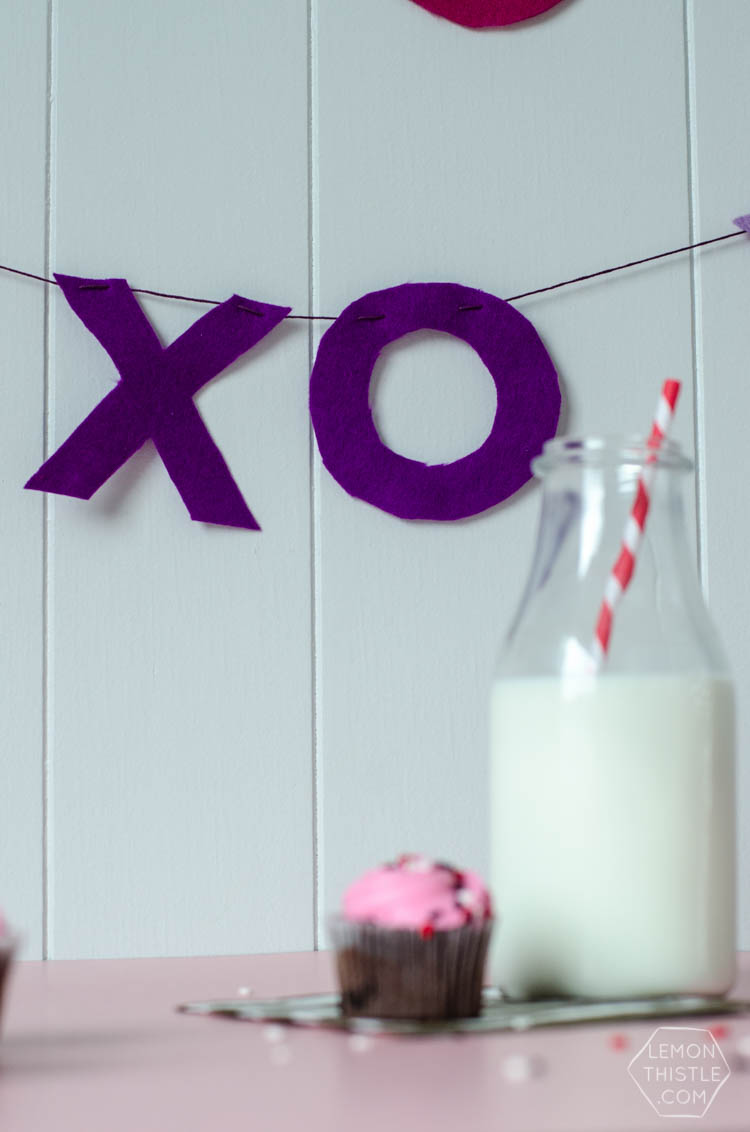 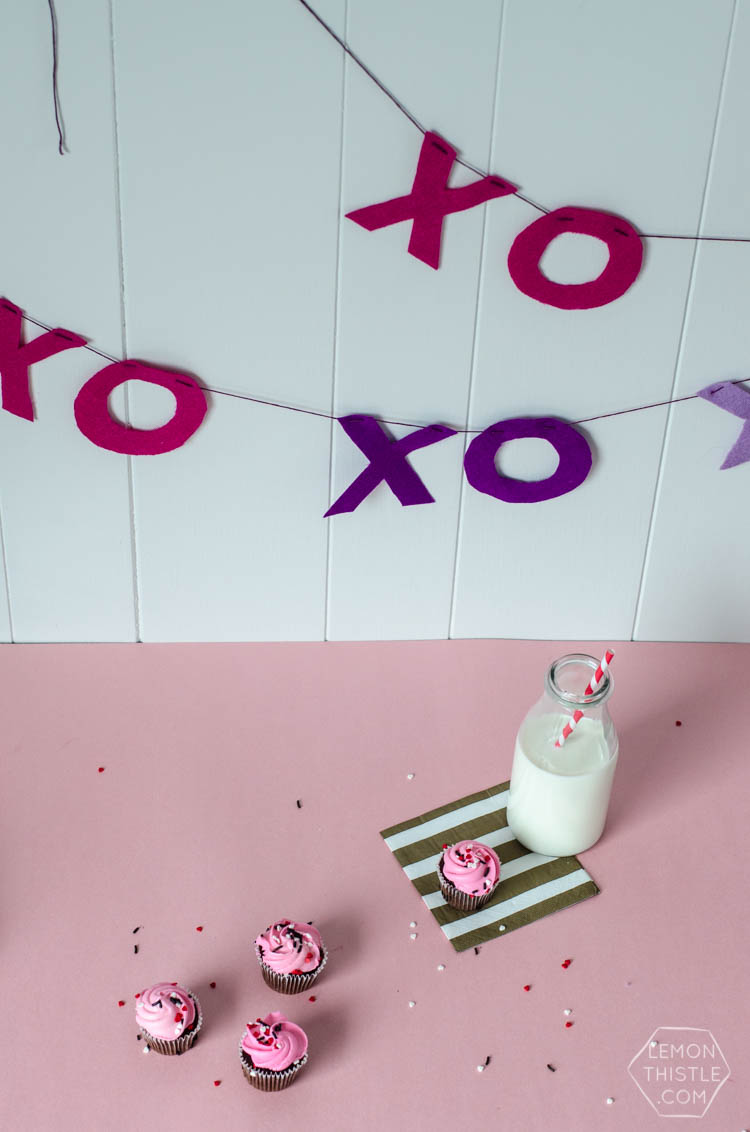 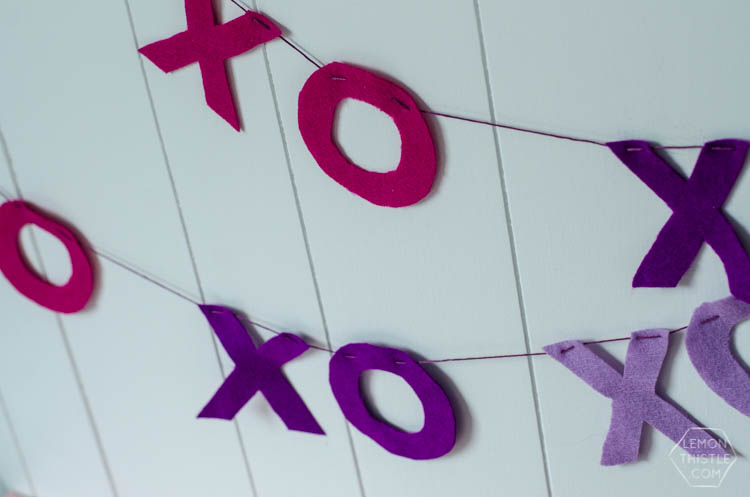 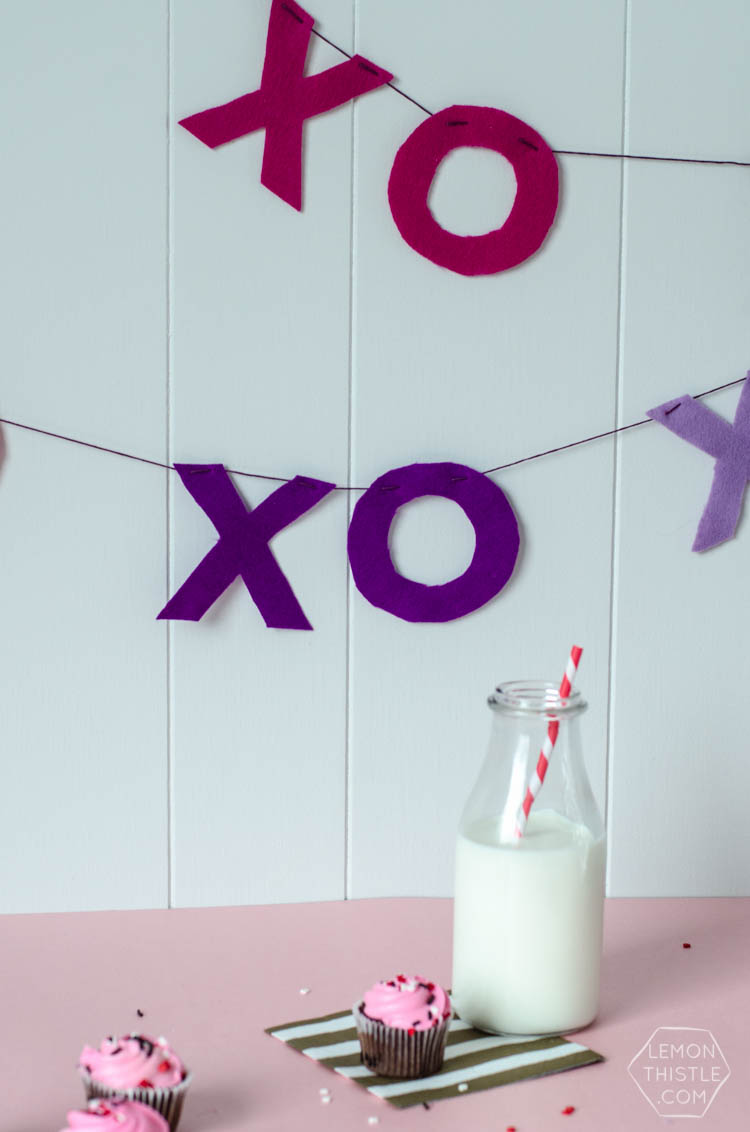 Now you’re ready to tape it to the wall! And eat too many mini cupcakes. That second part is very important. If you’re in to Valentines Decor- you could check out my pom pom garland I made last year for Valentines!

So of course I want to know what you think of this… but more importantly I want to know your take on Xs and Os. What? Xs and Os confuse me so much, I know that they’re hugs and kisses… but which is which? I always thought (growing up) that Xs were hugs and Os were kisses… but recently I’ve been informed that I’ve been wrong this whole time! What’s your vote? 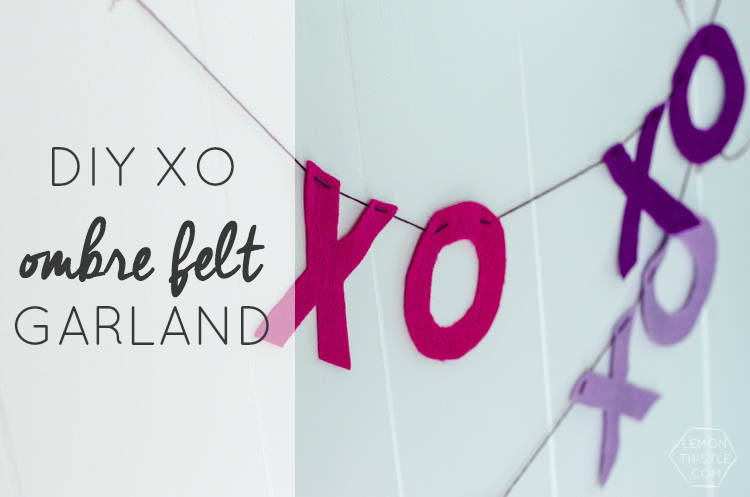 2014 Reader Survey Results (You Guys ROCK!)
Next Post: How I get my Photos Web Ready