Today I’m bringing you guys a surefire way to find out if you are prone to hay fever! JK- but seriously, it sucks so take something before you ever have to find out. 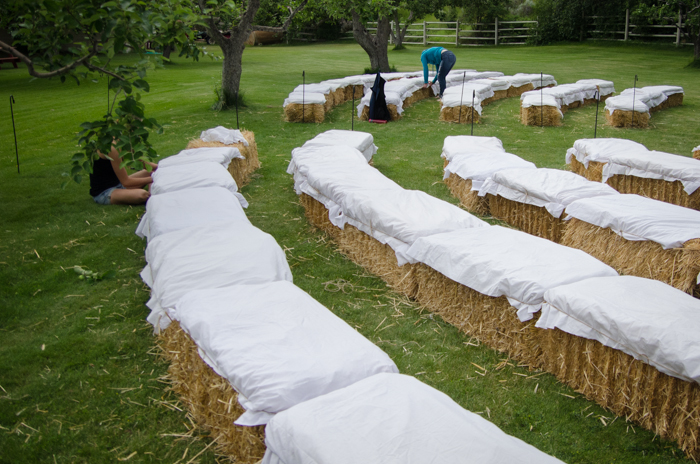 Anyways, My sister-in-law put together some gorgeous details for a wedding this past weekend and I asked if I could tag along and take some pictures of the set up. I only ended up staying for the set up of the hay bales (imagine that) but I think it’s worth sharing because it’s an awesome idea for country themed party seating! You’ve seen it before- I KNOW! In case you haven’t- check out this gorgeous weddings from SMP. But what no one has told you is that it’s a ton of material to cover all those hay bales. And no one wants to sit on uncovered hay in their party clothes- no one. So what’s a girl to do? 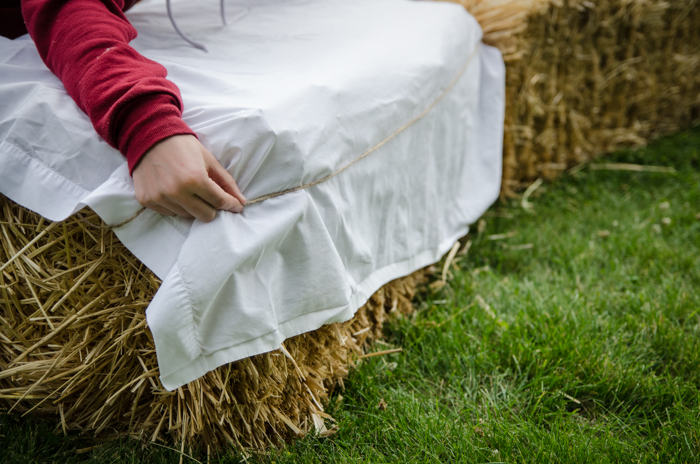 Hotels! Friends, hotels are often getting rid of old sheets that are wearing thin, have a stain, or when they’re getting a bit dingy. Call them- ask for them- get free sheets! Tear up those sheets, using the same technique as my party napkins. And then cover your sneeze inducing hay bales! Pretty clever, right? If you were just doing a few for a backyard party, I’d take the time and tear off all the edges of the sheets so it looks like raw material. But I’ve got a thing for raw edges- so that’s up to you. 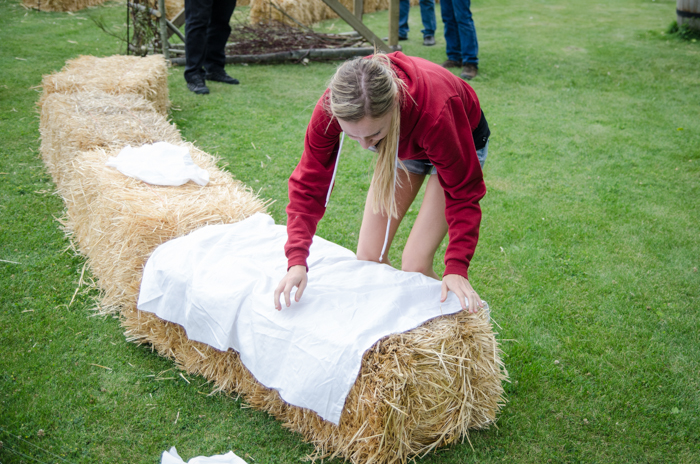 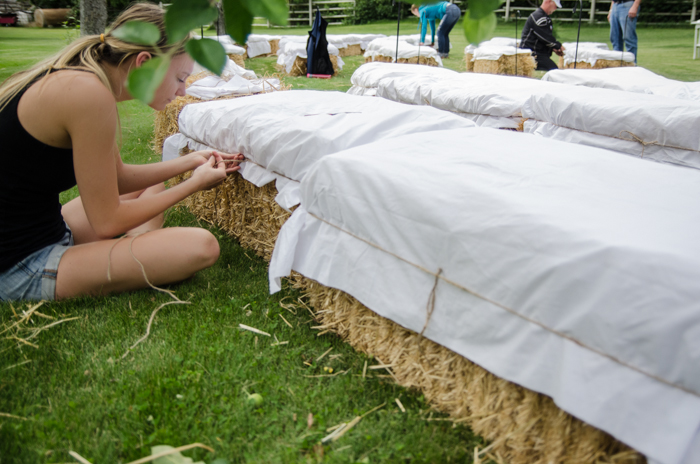 The sheets were tied on with jute (found in the hardware section of the dollar store) and even a minor windstorm didn’t affect them. If you’ve got extra hands- I’d make this a two person job- it was so much easier working with someone, as opposed to trying to stretch your arms around the back of the bale, while trying to make sure it’s even. Four hands, friends. When you’re done tying, you’re going to want to take a rake to get all the loose hay that’s littering the grass. 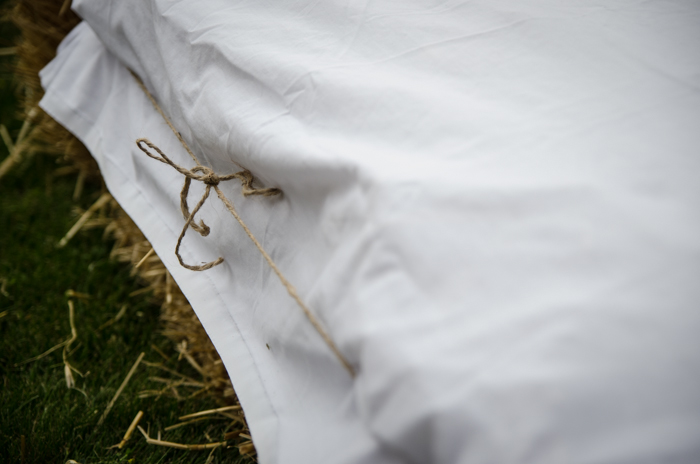 I also got to practice my penmanship on the seating arrangement… I’m in love with antique windows for seating charts! 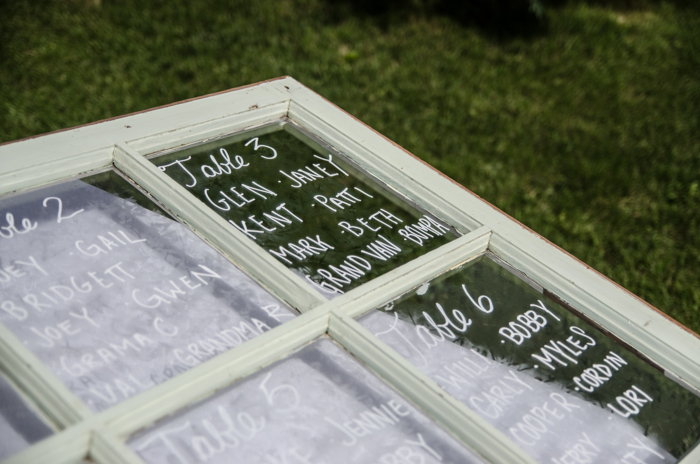 Next week I’m going to share how I made these fun S’mores favour tags for the wedding using only free computer programs- the internet is a wonderful place, isn’t it? 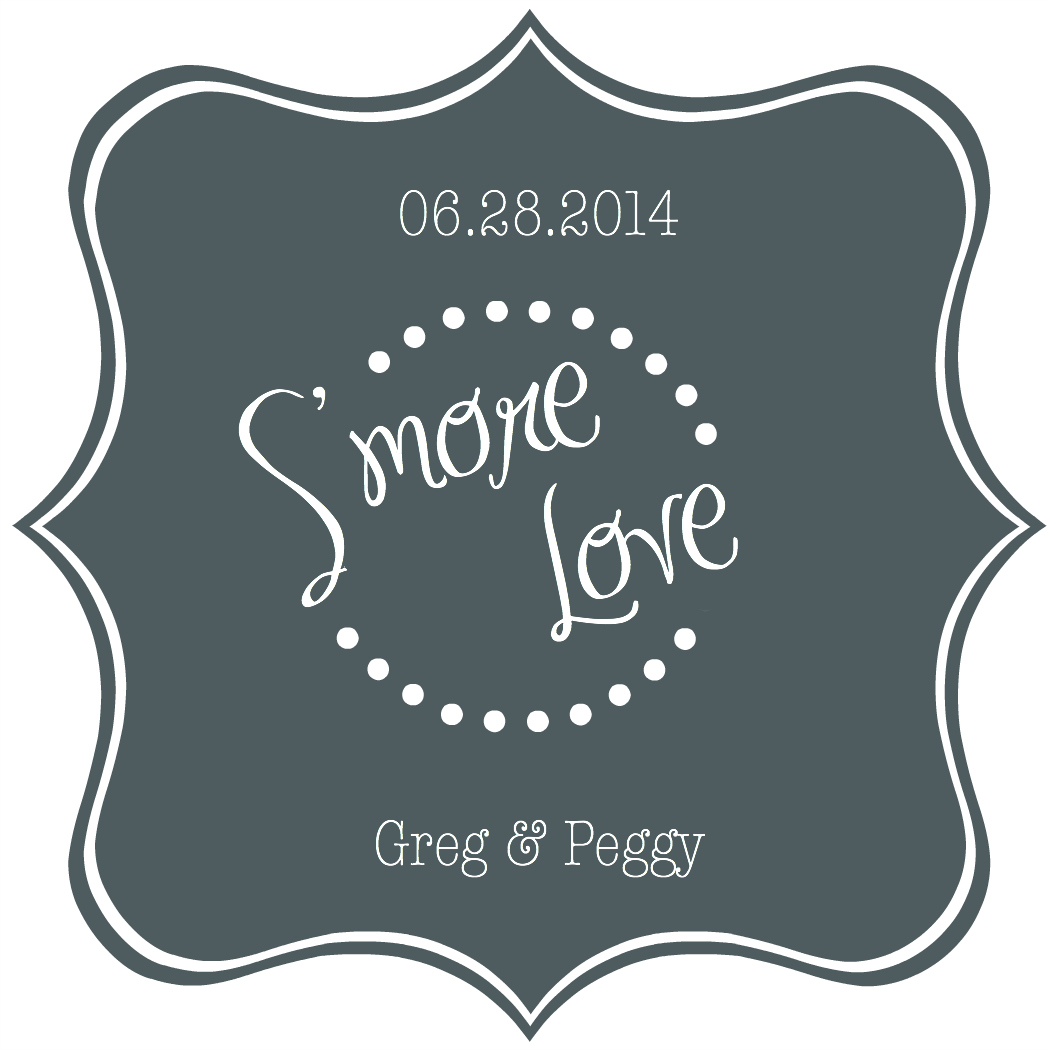 Would you ever use hay bale seating? I love the way it looks, but I’m going to be pretty hesitant in the future because of my hay fever!

How To Wire a Ceiling Pendant
Next Post: Celebrate Being Alive: Free Printable