Can I just say, I really had wanted to post this sooner but not only was it hard to put my thoughts to words but Blogger didn’t save it once I had! How exhausting. Either way, it’s finally done (for the second time) and I’m happy to hit publish.

Today is the original due date for Emmitt and Aubrey. I thought today was fitting to talk about them being a bit early now that we’ve had this extra five weeks with them. We knew, as most first time parents do, that the first weeks would be a struggle but thought we were as prepared as we could be for our new responsibilities. We also knew that twins often come early and there was a risk of prematurity and hospitalization for our babies. Since I’d been in the hospital for premature labour at 31 weeks, we knew this much more likely… but there’s no way you can prepare to go home without your children.

I wanted to share a bit about our last few weeks to document our experience for my family… and I can point anyone who asks questions this way (two birds, one stone or something like that). We are so lucky that our babies had really minor issues and are doing great now- but no matter how small, having our babies away from us is the hardest thing we’ve been through. This is probably one of the longer posts I’ll write, so if you’re not in for a read- pass on over, friend! With that said, here it goes.

Friday the 13th (ominous, I know), I had some labour symptoms in the early afternoon and called the hospital to get an opinion. We had company from out of town coming and I really didn’t want to go in (labour? I had other plans… so it couldn’t be!). I was pretty much looking for the ‘okay’ to stay home. That’s sort of what I got… ‘we’re busy today, unless you’re really worried then today isn’t a good day to come in’. The nurse actually said this… she also told me it was her first day so she didn’t know what time the doctors shifts started (turns out, my doctor was there the whole time). When I asked if there was someone else I could speak to she told me it wasn’t her ‘first rodeo’ and I should be fine. So, I took it as my ‘you’re not in labour’ and we welcomed our company that evening.

We ordered pizza and when Shane was out picking it up, my water broke. I had no idea what to do… it was way too early to have this happen! I was supposed to have another few weeks to get things ready for the babies, and I had projects I was working on, and I just wasn’t ready. I tried to argue that this couldn’t be labour all day and then… there was no question: this was it. 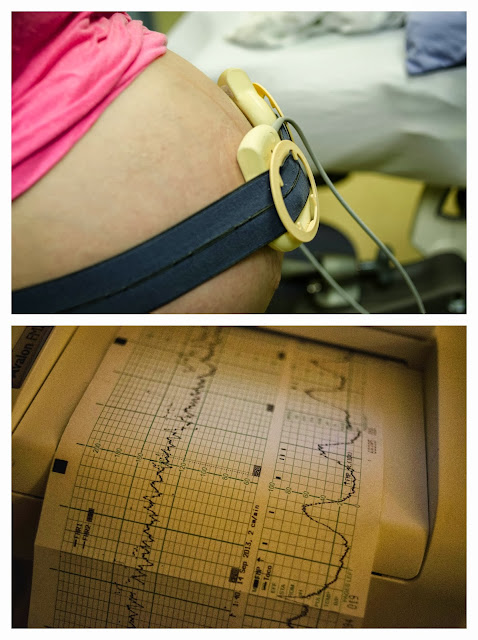 Our *awesome* company helped me throw things into a bag to take to the hospital, so when Shane got back with pizza in hand, we were out the door. (They’re so awesome that they also cleaned out our fridge, took out the garbage, and washed our sheets! Best company to have.) Since my pregnancy was considered ‘high risk’, I had to go in to the hospital as soon as labour started. I’m glad I did, by the time I got there my contractions really kicked in. 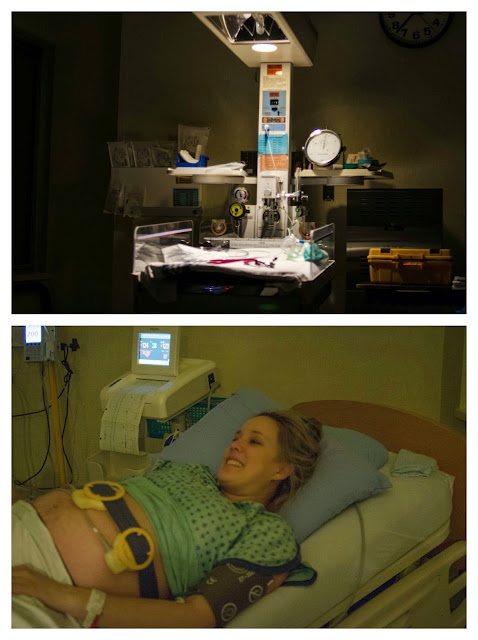 In no time at all, I was hooked up to monitors and an IV. They did an assessment and decided the babies looked happy and healthy enough to try for a natural birth. I was only 2cm so I had a ways to go. My doula (so fantastic, if you can- get one) showed up with coffee in hand for Shane and we started our laps to work those babies out. After what seemed like forever it was time to start pushing. Three hours later, (after no luck convincing the doctors they’d have to find another way to get these babies out) our baby boy was born, weighing 5 pounds, 11 ounces.

A short 13 minutes later, our little girl came into the world, weighing 5 pounds, 5 ounces. She had some brief breathing issues, but I was able to hold them both almost immediately. It was such a relief to be able to hold both of my babies, they looked healthy as could be. The hours went by, doctors came in and did some tests and their assessments and we were settling in as a family- the shock wearing off. When the pediatric team from the nursery came in to our room to explain that our babies would need to spend some time in the NICU (neo-natal intensive care unit/ nursery), that comfort disappeared pretty quick. 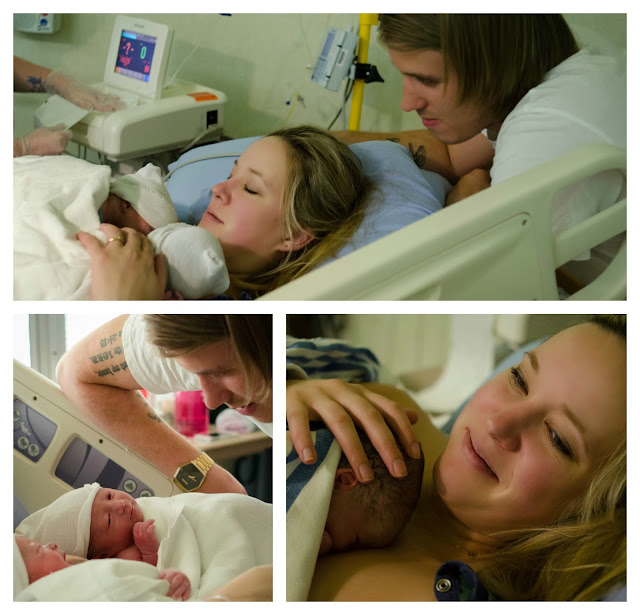 Aubrey had dangerously low blood sugars and they wanted to take Emmitt in for the night to monitor his as they were a little low. We watched the nurse take our babies away, not quite understanding where they were going or what low blood sugars meant for our babes. It was so heartbreaking to have our babies taken away after spending almost six hours with them, cuddling them and marveling at how beautiful they are.

It took a few hours before I pulled myself together enough to get out of bed and find the nursery. Our babes were sleeping so we had to wait until their next feeding to hold them. 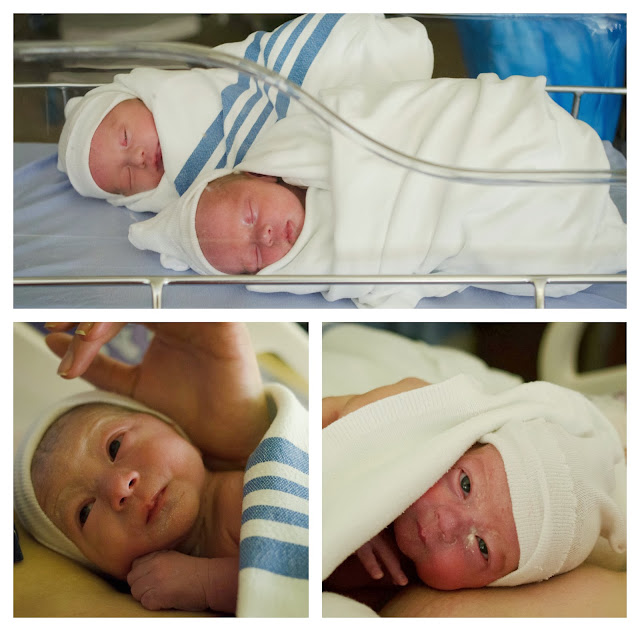 That first night they were just being monitored- if their blood sugars recovered by the morning they would be released to us in the maternity ward. They were improving all day, but dropped overnight so my precious children were officially admitted as nursery babies. This meant they were hooked up to monitors 24/7 which made them look much sicker than they really were. The next day Emmitt still wasn’t waking up to eat so they set him up on a feeding tube. It was awful to see our little man like that. 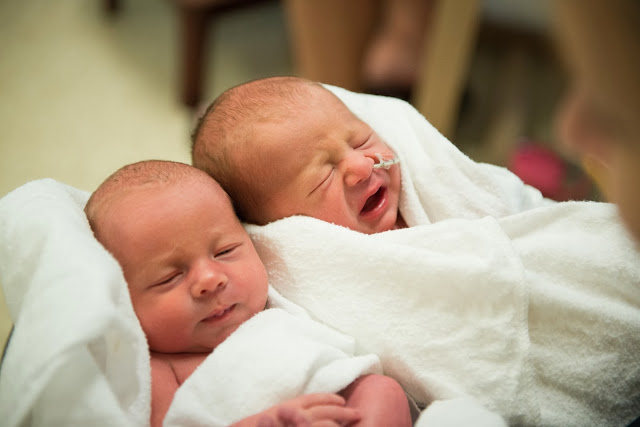 That night they moved them to incubators to undergo light therapy for jaundice. We were in the nursery for every feeding while we were in the hospital. We didn’t want to pass up any time with them. When we came in for one of the night feeds, they were hooked up to more monitors. The nurse explained Emmitt had stopped breathing. 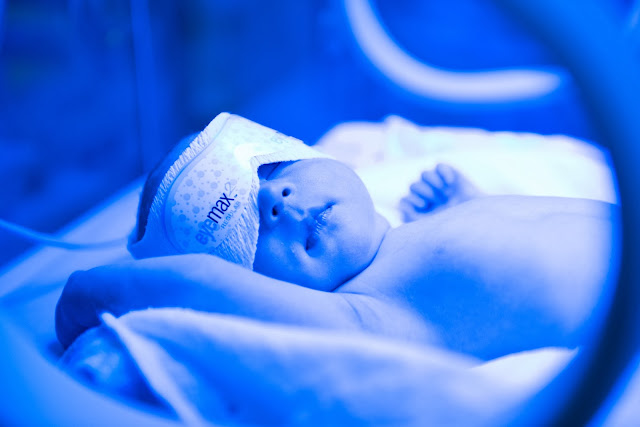 She assured us this was to be expected for 35 weekers (something I would be sick of hearing long before we went home) and that she only needed to pat him on his back for stimulation to get him breathing again. None of this made me feel better, my beautiful baby boy had stopped breathing. This meant Em was guaranteed an additional five days in the NICU. Until then, we’d been expecting to take them home in the next day or two.

For the next few days, it seemed like for every step forward, there was another set back. Their blood sugars leveled, but Aubrey’s weight dropped dramatically two days in a row. They completed their jaundice treatment, but Aubrey was put on a feeding tube. They started recovering weight, but Emmitt needed to have his tongue tie snipped. 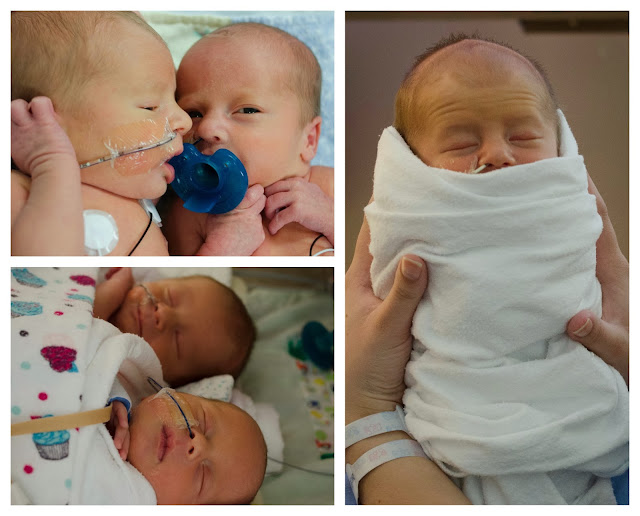 By day 8, things had started to turn. The babies were both gaining weight slowly and they were managing two feeds a day without their feeding tubes. The general expectation is that nursery babies feed 48 hours without the tubes before they go home. Day 10 they went all day feeding independently, we were so excited and our prayers were specific: that they not regress and we be able to go home in two days time. Nurses and doctors made sure we knew that even if they have a good day, not to get our hopes up- they’d probably be there until their due date (today).

The next morning we called ahead to see how they did. We were so excited to hear they made it through the night. We rushed in and explained to the nurse coming on shift that we are on-site all day and were going to bottle or nurse them at every feed… We wanted to push them. They made it all day too! That night we hardly slept. We went home later and came in early. I think we spent four hours at home that night. We had a nurse we hadn’t met before that night and worried she would decide they needed more sleep and use their tubes… but they did great all night too!

We went into the hospital feeling really good that morning. 12 days had been enough! The babes had done almost 48 hours and while their weight gain wasn’t as high as doctors aimed, they were still gaining weight steadily. 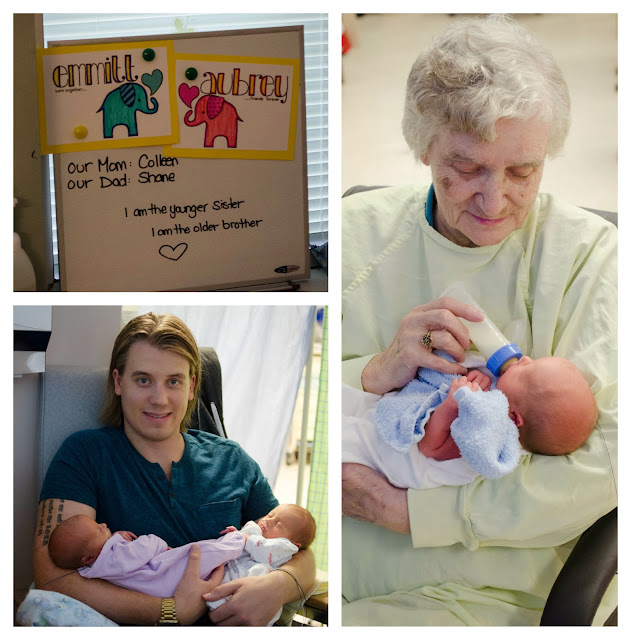 We waited patiently for the pediatrician to do her rounds. It was a new doctor on duty, we hadn’t yet met her. When it was our turn, she was updated on Emmitt and Aubrey’s progress and decided she wanted to keep them another night to make sure they were gaining enough weight.

My heart sunk and I’m sure I visibly looked it because she asked if I was disappointed. OF COURSE! She asked if there was a reason I had wanted them home soon. SO MANY. I settled on wanting them to have time at home before Shane went back to work. She stared at me and threw her hands up saying, I’m easily convinced. Some of the nurses chipped in to say how well they were doing and they supported us taking them home. I couldn’t believe she might be changing her mind.
After promising to bring them in to her office the next week for a check up, we were packing up our stuff and buckling them into car seats. 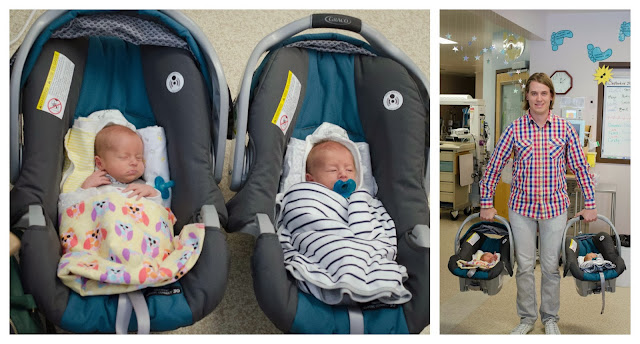 It was an amazing feeling, leaving and not having to go back. We’re so thankful to have them home but we are also incredibly thankful for the amazing nurses and doctors who took such good care of them while we couldn’t be there.
So that’s our long story, and I’m happy to have been able to articulate our experience. Even now, just more than one month later, it’s hard to remember those feelings but it’s been cathartic in some ways to write about them.
I promise I’ll be back with some fun content later this week! And it will be much more concise (pinky swear).
XO -C
Category: LifestyleTag: About Me, Around Here, Babies, Newborn
FacebookTweetPinLinkedIn
Previous Post: